Today turned out totally differently to how I'd planned it. I said farewell to Ben early this morning as he got the 7am ferry to Ullapool and I indulged in another few hours in bed snoozing as the room was full of snorers last night and it was hard to sleep.

I was up for 9am though and it was raining which had been forecast but you always like to think that it won't arrive. I had broken a spoke a good week or so ago and after listening to a few people had decided to get it looked at whilst I was somewhere with a bike shop and so popped along the road to see what they thought. The guy wasn't fazed, said if no other spokes had broken since then that it should be fine but he would have an order coming in the next few days if I wanted to pop back and get it seen to. Good news and works fairly well with my plan to ride up to the Butt of Lewis, to the Callanish stones and then back to Stornoway to get the ferry to Ullapool in a few days time.

I then stocked up on food and a few toiletries that I needed and was packed and ready to go by 11am. It was raining but not too hard and I hoped that the afternoon would brighten up. At least the wind didn't seem to be too bad. Riding across Lewis to the west over the moor it was rather dismal and rainy but the wind was at least in my favour. Not long after setting off I started to get a painful stomach and feared that maybe I'd eaten too much for breakfast. As I rode though the pain became much worse until all I could think about was my stomach. I do suffer if I eat too many carbs sometimes but this seemed different and I really started to feel like pants. There was nothing in any of the little villages I passed other than houses and other than a cafe at the Port of Ness just south of the Butt of Lewis I didn't know of any others along the way. Stopping to rest just made the pain increase and I just tried to pedal through knowing that I was only about 10 miles from the cafe and maybe then I could just pitch my tent and rest. There wasn't much question of doing that here as both sides of the road looked like boggy moorland and were fenced off.

Seeing a bus shelter ahead I stopped to get out of the rain for a break and to take stock. I'd seen a sign for a guest house and hostel and was seriously considering riding there to see if I could stay. It was only 1pm and I had only been riding for 2 hours but really felt quite awful. It's pretty unpleasant when you're in the middle of nowhere and feel rough and so I rode down the lane to find the hostel. Luckily there was someone in and they had space for me and the kind owner helped me into the hostel, put my bike in the barn and told me that if I needed anything then just to knock next door. I unrolled my sleeping bag and lay down, still in pain and hoping to sleep it off. Thankfully I dozed and woke at 4 ish feeling a bit better. I got up and spent the afternoon on the sofa with a book that I grabbed from the bookshelf and finally ate a little bit but just a snack. I feel so much better now and am hoping to be back to my normal self in the morning so that I can continue on my way.

It's important for me to remember that this is my journey, if I need to stay somewhere I can and shouldn't focus too much on mileage, money or feeling like I need to wild camp - being healthy and fit is essential otherwise I'll just end up unwell and unhappy. It's inevitable being away for so long that I will encounter days like today and so I'm glad I came across the hostel and took the day to recover. Time for me to hit the hay and fingers crossed I'll be up with the lark and feeling great - oh and the sun will be shining and there'll be no wind, although that may be asking too much, haha! 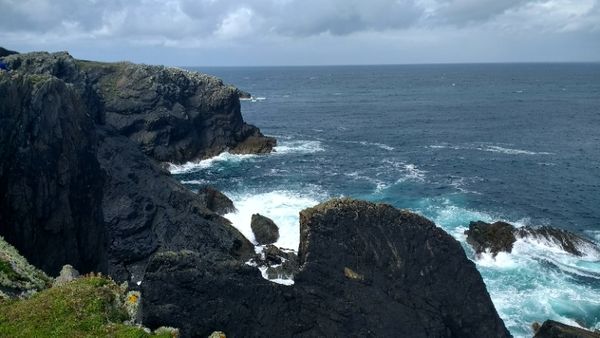 Today I finally feel like I've made it as a cyclist on an adventure as I was chased along the road by a dog snapping at my feet. In all

What a long night. After another lazy rest day hanging around the bothy yesterday we had to leave but pitched the tents just up from the cliffs. The wind was