Waking on the north east shore of Vatersay I listened for rain. I arrived on Barra last night after a 5 hour ferry ride from Oban to rain and wind. I'd been told the nearest wild camp spots were in Vatersay and so rode the few miles over the causeway and pitched up for the night. It turned out to be a nice little spot and as I lay in my tent I thought I heard a kind of sneezing, snorting sound. I hadn't seen any animals and so unzipped the tent and stuck my head out to investigate only to see a group of about six seals bobbing and playing in the water. I got out of the tent and believe it or not they swam along the coast to see me, curious little things. They were there again this morning and one of them watched me for a good hour whilst I packed everything back onto the bike, lovely. The rain had gone and it looked like it could be a nice day. I rode around to the beaches at Bhatarsaigh and the sight of them took my breath away. Turqouise blue waters and white sand beaches on both sides of the road, what a sight. The sun had come out and I wandered down onto the sand, it looked like I could be in the Caribbean! I had noticed a cafe on the ride in and it looked like they were open now and so I went in for a pot of tea. Nearly two hours and two pots of tea later I left, haha. There was a group of walkers arrived that had been on an outing from their boat, the Hebridean Princess and I had gotten chatting to the Chief Purser from the boat, Dave. He told me all of the places they'd been and where was good for wildlife and boat trips, I thoroughly enjoyed chatting to him. One of the men, Ted, came up to me and gave me what was left of his whisky miniature and said to enjoy a wee dram. It was from the boat and I accepted it gladly, a lovely gesture.

Finally tearing myself away from the cafe I rode back across the causeway to Barra to start a circuit of the island. The ferry terminal at Castlebay looked much nicer in the sunshine than it did when I arrived last night. Heading anti-clockwise I had a long slog up the first hill. I wasn't feeling too great, I had stomach cramps and was feeling very bloated but there wasn't much choice of stopping as it was a glorious day and I wasn't going to waste it in a tent. After a wonderful descent I turned a corner and saw a gorgeous little bay with rocks, golden sands and beautiful blue water. I'd been told that the west coast of Barra had amazing beaches, I wasn't sure how these ones could be beaten but I was sure to find out after a few miles. As I rounded the top of the island and hit the west coast the sand dunes were aplenty. Then the beaches appeared and wow.... Riding the full circle back to Castlebay I popped into the Co-op to get some dinner and treat myself to a bottle of beer to drink by the beach later. I'd picked out a possible camp spot earlier and so rode back along the coast towards it. There was another biker sitting on the bench there and so I put down The Beast and asked her if she would mind me joining her. Sandy was from Germany and was cycling the length of the Outer Hebrides from Stornaway to Vatersay and back over 7 weeks. We chatted for quite some time and I told her that I was planning a wild camp in this spot and she agreed that it was a nice place but that she was in the campsite just down the road as she needed to charge her batteries for her phone. It was a shame as I enjoyed her company and it would have been nice to have a camping buddy for a change. We discussed how we were both travelling solo and wild camping and we agreed that the islands were an amazing place to wild camp and that we hadn't felt at all threatened or scared when doing so. As she got up to leave she explained that she wasn't actually alone and she brought out a small sheep who she explained was called Shaun. I laughed and told her that I too had a travelling companion, Monkey.

Alone again I setup camp and Monkey and I sat sharing a beer on the bench. The end of another day on another amazing island! 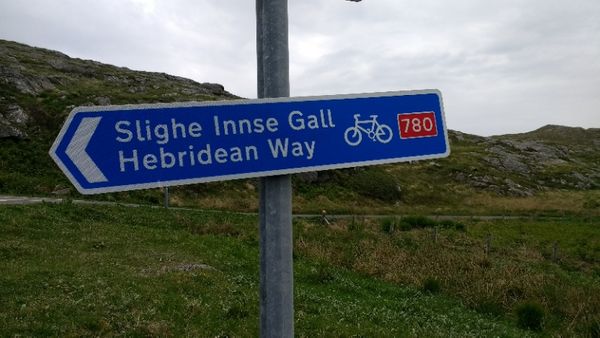 Today was an exciting day, clean socks day! They are so nice and fresh and I can guarantee that by the time I take them off tonight they will reek. 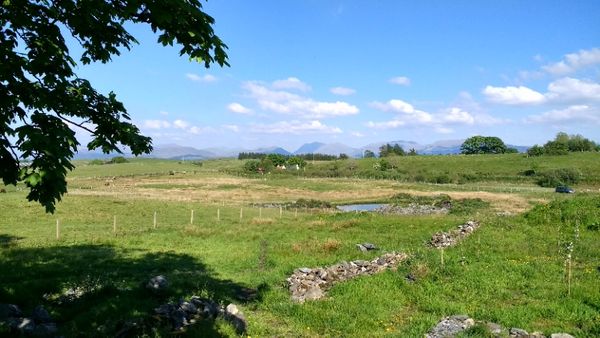 Waking after a pretty good sleep it was nice to just go downstairs and sit on a sofa drinking tea and eating breakfast. It's the change to a routine that