I'm sat in my tent overlooking the beautiful Lochan Fada near Struy and there's not a whisper of a breeze in the air. It sounds idyllic doesn't it? Now imagine thousands of midges over every surface of the tent and a swarming cloud outside. It is grim! On my last Scottish trip I experienced midges but nothing like this. I'm covered in a layer of smidge and have long sleeves and trousers on and after playing a long game of squish the midge in my tent I think there aren't many left inside. Outside is another matter though and I'm actually considering peeing into my mug just to avoid having to go out there again and start the whole horrendousness again.

Barring the midgefest this evening it's been a really nice afternoon of riding. Making the most of our night in the hostel, we didn't set an alarm and enjoyed the luxury of a lazy morning. It was raining and due to ease off mid morning and so we ate a leisurely breakfast, drank tea and coffee and eased ourselves into the day with plenty of faffing for good measure.

After a quick stop at the hardware store for camping gas and Londis for food we set off along the Great Glen Way. Straying from the Great North Trail we were following part of the Highland 550 route through Invermoriston and Corrimony to rejoin the GNT just north of Cannich.

Riding alongside Loch Ness we kept an eye out for Nessie but we saw no monsters, only the wee beasty midges whenever we stopped even for a second. It was humid and very still and we worked up a sweat along the undulating trail to Invermoriston.

Needing to stop for lunch was a bit tricky because of the midges. Charlotte suggested putting the inner of her tent up and so we threw it up by the side of a gravel road, clambered in and had lunch in relative peace. Packing it up afterwards was another matter though.

We climbed up past Bhlaraidh and Liah dams with the wind turbines in the distance. The drizzle started as we got to Stac dam where the trail promptly disappeared before our very eyes. Checking the GPS and map the route followed the side of the dam but there was no track just a soggy bogfest. There was nothing for it but to try and make our way through the maze of boggy channels until the end of the dam where the trail should hopefully reappear. Charlotte got out her secret weapon, plastic bags for her feet and I said a fond farewell to the joys of dry shoes as we weaved our way through the tussocky bog-strewn moorland.

Thirty minutes later and we'd made it to the end of the water and could see the faint outline of a trail in the distance. A well deserved snack stop saw us finally finish the lemon drizzle cake that we'd gotten from Ruth days earlier and we both decided that we'd been lucky just to have had only a half hour of bog beating, anymore would have quite likely turned into type two fun!

The track was rough and ready as we bumbled along the makeshift route. It was so rough in fact that I stopped to tighten my front handlebar bag only to find my saddle bag hanging off and open at the back. I'd lost my bike lock out of the back but thankfully everything else was still in place. It was slow going but beautiful and again it felt rather remote. When the muddy track turned back into gravel we cheered in delight and savoured a very fast downhill stretch towards the Corrimony Reserve.

Back on terra firma we both decided that that had been just the right amount of adventure for the afternoon, a challenge but not to the extent that it had become miserable. As our gravel then turned into tarmac and we hit the road, the rain got heavier. A long downhill in the rain saw us take a small detour into Cannich in search of some shelter. Finding the Slater Arms pub we headed inside as the rain was stopping and indulged in a pot of tea in an attempt to dry out a bit.

Further food based faffing at the Spar saw us back on the road just after 6pm and we ate up the miles to Struy in the humid evening air. Our final climb up to this midgefest camping spot was laden with the bright purple flowers of the heather and yet more scenic views.

It is with sheer delight that the wind has finally picked up since I started writing. I can actually see the view from my tent without a sea of midges and I didn't have to resort to weeing in my mug! Thank heavens for small mercies and a light breeze. 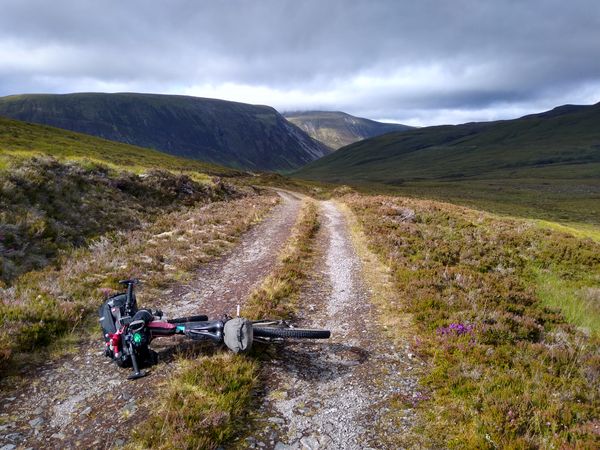 After midgegeddon last night I woke to a scene of carnage in the tent. Dead midge covered the tent floor and the mesh was dotted with the squished bodies. It 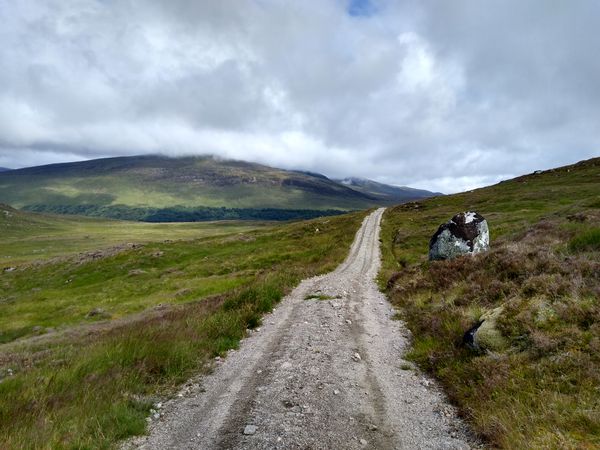 It's been three years since Scotland captured a piece of my heart and within twenty four hours of being back I feel like I've come home. Thinking about it now