Today I finally feel like I've made it as a cyclist on an adventure as I was chased along the road by a dog snapping at my feet. In all of the books I've read of cycle touring there always seems to be a time when there is a dog chase and today I've had mine!

I felt much better this morning after stopping early yesterday afternoon to rest. Fueling up on porridge I headed for the Butt of Lewis along a dreary and lonely road. The wind was blowing from the east today so not a headwind but nevertheless a strong wind that was persistently blowing. Unfortunately because of my rest yesterday today was Sunday and that meant that none of the cafes along the way would be open. Sunday is still very much a holy day here in the Outer Hebrides and that means no shops, museums, tourist attractions or cafes open and there are even restrictions on playing in the park. Reaching the Butt it was overcast but dry. It was rather busy as a coach of tourists had just arrived but one of them offered to take my picture and so I indulged in a pose with The Beast. The Butt of Lewis is on the most northerly point of the Isle of Lewis and is also in the Guiness Book of Records for being the windiest point in the UK. The lighthouse was designed and built by the Stevenson brothers and is still in use today, although it is now automated and requires no lighthouse keeper. Suitably blown around I started the long journey back the same way I'd come. I hadn't gone far when I saw a B&B that had a small sign for a cafe. There were two bikes outside and there was a glimmer of hope in my heart that they might be open. I stopped and opened the door to find a couple in what looked to be a living room. I apologised but asked them if they were open as a cafe and to my sheer delight they said yes and invited my through to the cafe area at the back of the house. I thanked them in advance as I really had thought that I wouldn't get to taste the wonders of a pot of tea today.

Two hours, two pots of tea and one bowl of lentil soup later I couldn't put off the riding any longer. Four other cyclists had come and gone in that time and I was just lingering in the hope that the wind would stop and the sun would shine whilst I was procrastinating over a brew.

Venturing out again I felt renewed and was enjoying the ride even though the wind was still blowing. I was in the zone and just turning those pedals quite happily. I took a small detour to see 'The Thrushel Stone' which is the tallest standing stone in Scotland. Then the rain started. I managed to hide in a bus shelter for the worst of the first shower but then after emerging I was hit by the next shower, and the next until I was rather wet. I'd made it back to Barabhas and went south towards Callanish. It wasn't much fun and although it was only 5pm I was on the lookout for a camp spot, I just didn't look forward to putting up the tent in the peeing rain. As luck would have it I came across an old hut just off the roadside that looked like it had recently had a new roof on it. I stopped and had a look and the door was unlocked. Peeking inside it looked like it was being used to house some tools and I seriously considered commandeering it for the night. Looking around to make sure nobody was watching I snuck in and made room for The Beast. I'm sure no-one would mind me using it for the night to get out of the wind as another night in a flapping tent would mean no sleep again. I got my stuff out and it looked rather cosy. I even managed to get a phone signal and 3G - this place was better than some of the hostels I'd stayed at, haha! I set my alarm for 7am in case anyone would arrive and settled down for the night. It was so nice to be out of the wind and rain and not have to pack up a soggy tent in the morning. Nighty night! 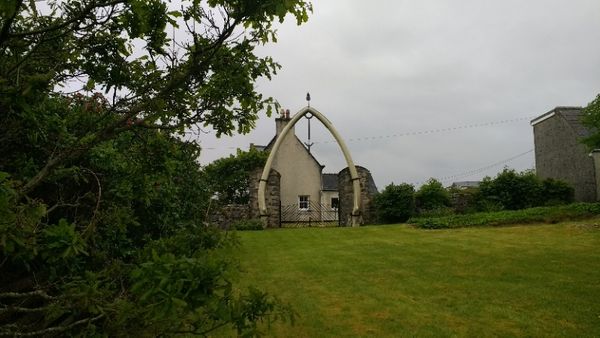 I've just spent the last hour with a lady called Janet who is a volunteer watcher for the Whale and Dolphin Conservation (WDC). I'm overlooking the lighthouse at Tiumpan Head 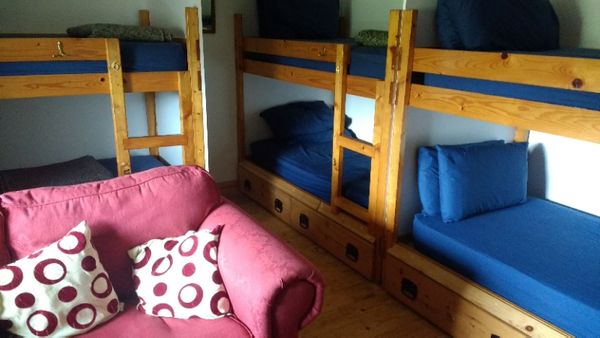 Today turned out totally differently to how I'd planned it. I said farewell to Ben early this morning as he got the 7am ferry to Ullapool and I indulged in