Colonsay is a small island of only 8 miles long and 2 miles across at it's widest and one of the remotest communities in the UK being 8 miles from it's nearest neighbours, Islay and Jura. South across The Strand lies Oronsay which is only accessible a few hours of the day on low tide.

The ferry runs only twice a week from Port Askaig on Islay and so today I rode the 15 miles from the hostel in Port Charlotte across to Port Askaig for the 12:15 crossing to Colonsay. Arriving surprisingly early at 11:00am I sat outside waiting for the ticket office to open and got chatting to another cyclist who had ridden from Port Ellen and also arrived rather early. We were both headed for Colonsay and Colin was at the start of his 7 week trip around the islands. I couldn't believe the amount of kit he had on his bike and have no idea how he could even cycle up the hills! He immediately admired my bike setup and started talking about changing to a bikepacking setup rather than the touring paniers he had and even took a photograph of my bike he was so impressed.

Waiting for the ferry it had started to rain but the sun was shining brightly when we arrived in Colonsay after the 1 hour crossing. My first port of call for the day was to be Colonsay Brewery as I'd heard great things about it the day before from one of the tour guides in the Bruichladdich distillery but to my disappointment it was closed. Who closes a brewery on a Saturday?

Heading anti-clockwise around the island I went north from Scalasaig and took a nice track off road skirting around the eastern point of Loch Fada and through some of the grounds of Colonsay House. It was a refreshing change from road and the greens were so vivid it was lovely. The beach by Kiloran Bay is considered by many to be the prettiest beach in the Hebrides and although I couldn't see it yet, I carried on up the farm track behind the beach and was rewarded with the most wonderful view of golden sands and beautiful blue seas. Framed by the rocks and green grass it was like a window to heaven! Stopping briefly to watch a couple walking their dog on the beach I told myself I'd follow the track further along to Balnahard and return here for a spot of lunch.

It was pretty tough going and I had to push the bike a few times but I think I'd already seen the best bits of scenery. I was only here for a limited time as I had to return on the 19:00 ferry and so retraced my steps back towards my chosen lunch spot. I hadn't seen much wildlife here apart from sheep until I saw a mountain goat atop of the hill, very Billy Goats Gruff! Back on the road to Kilchattan I came across two standing stones known as Fingal's Limpet Hammers. I passed the golf course and just overshot the road that goes south to The Strand. There was no signpost, I suppose it's not really necessary with only 10 miles of road. Reaching the sands I could see Oronsay but I hadn't checked the tide times and it looked impassible. It was beautifully sunny though and this was the last section of the island to explore. I had a good few hours before the ferry arrived but I still wanted to sample the Colonsay beers and so made my way back to Scalasaig to the Hotel where a couple who I'd met earlier had told me they served local beers. I wasn't disappointed and to my delight there were two beers to try. Settling into the pub and reading a bit of my cycling book I started to unwind and enjoy the lovely buzz of the tasty beer. I obviously had to sample both ales and so spent the next hour sipping cold beer and trying to send a few messages home on the unpredictable WiFi.

Feeling rather sleepy and slightly tipsy I rode back to the ferry terminal and waited for the boat to come in. I got chatting to a man and his 2 sons who were also over for the day but they had realised a little too late that the ferry from Port Askaig over to Jura wouldn't be running when we arrived back at 8:25pm and so were trying to find a way to get over there. They had folding bikes with them as they were really here to hike the Paps of Jura but again they all took a shine to my bike and we had a good chat.

I really didn't fancy the steep hill climb out of the ferry terminal at Port Askaig and then having to find a camp spot so late in the evening and luckily a man who was asking my about my bike on the ferry mentioned that the hotel let people camp there. I figured shy bairns get nowt and so went over to ask and was led to a lovely little patch of grass overlooking the Sound of Islay by the lifeboat station. Not a bad room for the night! I felt that it would be rude not to have a drink in the hotel to thank the owners and so had my last pint of the evening in a cosy little bar. 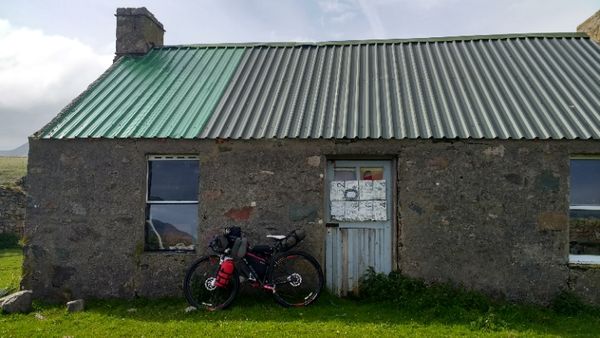 I'm sitting on a woodworm riddled bench writing this. The wind is howling outside and the tin roof is rattling like there is no tomorrow. The rain is lashing the 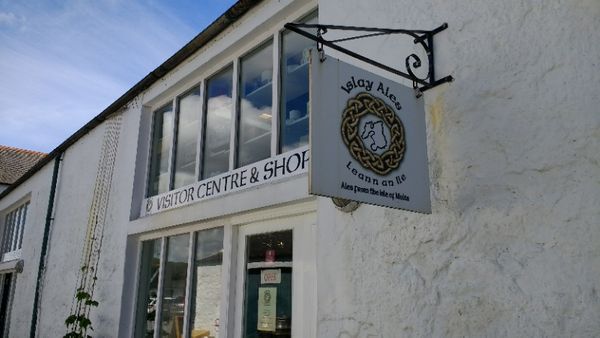 The last few days seem to have passed in a blur. You would think time would slow down when you're cruising along by bike but I find that the days