As I write this I'm happily perched on a rock just below Ardnamurchan lighthouse. It's the most westerly point in mainland Britain and there are blue skies and sunshine. I feel calm and happy - a far cry from the rest of the day.

It rained from about 8pm yesterday heavily throughout the night. I had to get up in the night to reinflate my roll mat and then again at 5am when I got up for a wee. I woke again at 7 ish totally exhausted and yet still couldn't sleep. At times like this I do think that my body is trying to kill me, to push me right to the edge of it's limits.

Yesterdays wind had gone which meant only one thing - midges. Headnet on I quickly cooked my porridge, packed everything away and loaded up The Beast. Unluckily for me the Glenuig Inn just down the road doesn't do tea/coffee on a morning for non-residents and so it was straight on the road heading south towards Acharacle where I was hoping to get a brew in a cafe.

Right from the off it was uphill and I just didn't have anything in me. My legs alternated between feeling like lead and then like jelly. Everything felt heavy - me, the bike, my legs. I kept checking the rear tyre as I thought I must have a puncture as I felt drag and resistance. Today was going to be a rough day.

I felt like I was in a haze or slightly drunk, not quite focused and really not feeling the riding. Every pedal was hard work, even on the flat and downhills. I ate again to see if that would help, I took a break and I tried to drink plenty and nothing had any effect.

After 7 miles I arrived in Acharacle and popped into the village shop for a banana. I asked where the cafe was and the lady told me that it would be closed because it was Sunday. I bloody hate Sundays, they always kick me in the teeth. Maybe it's 10 years living in London that has gotten me used to everything being open on Sundays but I think it was the straw that broke the camels back for me. Rather wonderfully the lady in the shop said that they did takeaway tea if I wanted it - all was not lost! I sat in a bus shelter outside drinking my tea and trying to gee myself up for the next few miles to Salen. Back on the road I could feel the dark thoughts creeping in, 'you can't get all of the way to Kilchoan feeling like this.... you'll never make it.... just give in.' I struggled to fight them off because I felt so tired and so when I turned the corner at Salen to find that the hotel was open for coffee and tea I was relieved. I could sit down for an hour and have a brew and everything would be much better after that.

I got my tea and then the chap came back with a piece of cake that needed to be eaten he said and so I obviously didn't want to insult him and I gladly ate it. Maybe he could see I was having a rough day but it made me smile. A group of cyclists turned up and I got chatting to them. It was a family affair, a grandad, father and his two sons on a week long trip which I thought was fantastic. They'd ridden from Kilchoan the previous day and warned me of how up and down it was. I knew the road was going to be hard work but I really didn't want to hear it from someone else. Nevertheless I wished them well on their trip and started pedalling west. The road went along the coastline and it was lovely scenery right from the start. The singletrack road wasn't very busy and I had a nice view and so I was feeling a bit tougher mentally but my body was still lagging behind. It is very difficult not to get frustrated in these situations when you've tried everything to help yourself pick up and it just isn't happening and so I got into a rather low mood and started to doubt myself. I doubted whether I could make it to Kilchoan. I doubted whether I would make it around Mull and I doubted that I could even finish my trip! I knew I should snap out of it and think positively but I just couldn't think of anything that was good at the time.

The answer to my prayers appeared on my right - Ardnamurchan Distillery. It was open, there were no tours on but I watched the video which basically told you everything that a tour would and I paid for a wee dram. The distillery only started production in 2014 and wouldn't officially have it's own whisky until the 26th July this year and so I tried another whisky which is bottled by Adelphi, the company who started the Ardnamurchan Distillery. My god that whisky tasted good! I smiled as the golden liquid soothed my troubles, each drop of deliciousness filling me with a warm cuddle from the inside. After chatting to the lady in the distillery she told me that Kilchoan was 11 miles away and that there were 3 big hills to get over. Again, I didn't really want to know these things but it happens when you tell people where you're going. I asked her about the road out to Ardnamurchan Point as I had thoughts of visiting it and she seemed then to not want to tell me much and just said she had ridden it on a bike in an hour.

Leaving with a nice buzz (possibly from the whisky) I thanked the whisky gods for their super timing and headed west for Kilchoan. This was it, time to focus and be strong. Mental strength can allow people to perform superhuman feats such as running 100 miles and so I was going to kick my doubt into shape. Physically I tried to ignore the screaming of my muscles on the first hill. Telling myself to just keep spinning the pedals and urging the Beast up the hill one revolution at a time. I can make it! I have done this before and I will do it again! This is not the time for quitting! By the top of the first hill I really hoped that there wasn't another two like that and luckily for me things were finally starting to improve a bit. The rest of the hills were easier and upon seeing the sign for 2 miles to Kilchoan I was more than pleased. I ignored the turn off for the ferry to Mull and continued on to the shop hoping to get a sugar hit but stupid Sunday struck again and it was closed. I sat on a bench and ate some cheese and then realised that I had some cookies in my bag, woop! Sugared up I made the decision to go the extra 6 miles out to Ardnamurchan lighthouse. I couldn't come this close to the most westerly point in mainland Britain and not go. Yes, I am a glutton for punishment but I think the sugar had clouded my mind at this point.

Less than a mile in I realised the road was going to be 6 miles of hilly hell. I am definitely not right in the head! With my mind in a better place I actually started to enjoy the scenery. Ahead was blue sky. It had been overcast all day and the only blue sky I could see was exactly where I was headed, it had to be the right place to go! I struggled, but less so than before and I do think it was a bit of a case of mind over matter. The gorgeous views helped a bit I think. Riding up the last climb to the lighthouse I was so happy. 35 miles of tough hilly riding and I'd done it, I'd beaten the demons within! I felt like I was superwoman and could do anything. I had made it to the most westerly point in mainland Britain and it was a beautiful sight. The icing on the cake was that there was a cafe here that was open, wooohoooo! Tea and WiFi and the knowledge that I wouldn't be riding anywhere else tonight was fantastic. I wandered down to a picnic bench and got chatting to a father and son who had been fishing. We sat for maybe half an hour chatting about all sorts and they offered me coffee and biscuits, it was amazing how the day had turned around. Today has been one of the hardest days of my travels both physically and mentally and although I feel exhausted I also feel proud that I managed to do what I set out to do and there's no better feeling than feeling like you've succeeded, not matter how big or small a feat it is.

It's difficult to say this as I've had so many truly wonderful wild camp spots but this one does feel quite special. I'm pitched just under the lighthouse and have an amazing panorama before me. Today was certainly a day of two halves, let's hope tomorrow continues like this evening! 😁 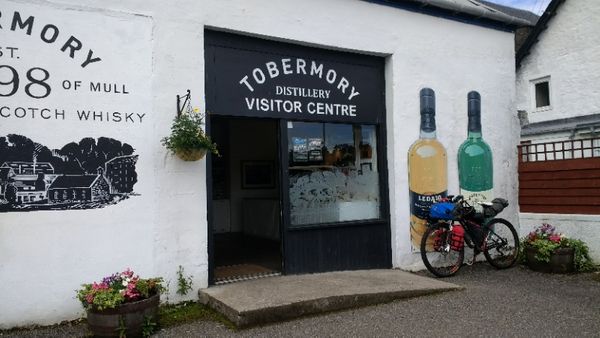 My roll mat definitely has a slow leak in it somewhere as twice in the night I woke on the ground and had to blow it up again. I slept 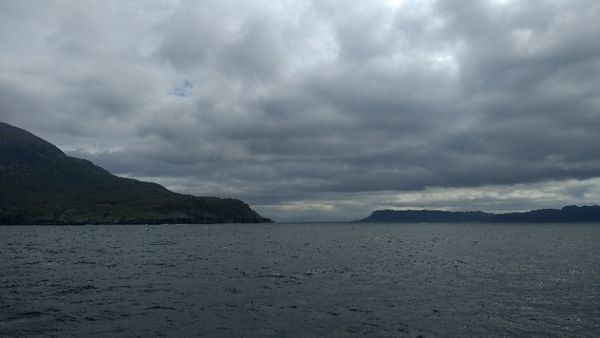 I'm up early this morning to give myself plenty of time to get the ferry back to Mallaig today and what a sight. The deer are lying on the beach