I'm just going to come straight out with it - this has been the best day of my trip so far! I wouldn't have thought it at 6am this morning when I awoke to hear the campers next to me slamming car doors and chatting as they packed up ready to leave. Tired and grouchy I was very tempted to take another day off the bike but I didn't give in and instead I rewarded myself with a pair of nice clean socks. That put a smile on my face.

Today I was leaving Taupo and heading west again to camp not far from where I will reconnect with the TA route tomorrow. I'd been in two minds about whether to just ride the roads to get there quicker or to ride some of the Great Lake Trails. The lure of the off-road tracks was too strong to resist and so I set off from Acacia Bay heading for the Whakaipo Bay Reserve.

The first section of the trail was the W2K (Whakaipo to Kinloch) and given the height of the fence and the weight of BB we nearly didn't get started!

Nervous of the amount of climbing involved I was pleasantly surprised by the gently winding incline of the dusty track. The singletrack hugged the hillside as it slowly rolled around the headland. It was such a flowing trail that I literally didn't notice that I was climbing which is a truly wonderful thing. I could see snippets of the lake as I climbed to the highest point.

Halfway to Kinloch I'd crested the highest point and was in for a treat, a three and a half mile descent. Curvy forest corners made for a fun ride and not having to pedal for a few miles was pure bliss. It wasn't a technical route and I could ride it at a good speed without taking any risks of creating more bruises.

Views of the bay and the marina at Kinloch made for more smiles as I decided to take a break before tackling the next section. A mocha caramel slice hit the spot to tide me over until I reached Kawakawa Bay at the end of K2K (Kinloch to Kawakawa). The next six miles had me grinning from ear to ear with more of the same glorious riding. Rounding a corner near the highest point of the trail, the view took my breath away.

I'd encountered only a handful of riders coming in the opposite direction and here I felt like I was the only person on the trail. The ride down to the Bay was a joy and as I reached the shoreline I felt like I'd been transported to a remote island paradise.

There was a boat anchored just off the shore and a couple sunbathing as I threw down my helmet and gloves, whipped off my shoes and socks and plunged my hot, sweaty feet into the cool lake. I nodded a greeting to the sunbathers and plonked myself down to enjoy the view. This place was too nice to ignore and the water was so enticing and so I jumped into the bushes to change into my bikini and went for a swim. Deliciously refreshing from the heat of the morning's riding I languished in the cool water feeling like the world was a wonderful place and I was so lucky to be here in this moment.

Suitably cooler I sat in the sun drying off and eating my lunch. I could hear shouting and it took me a while to realise that there were a couple of climbers up on the rockface along the bay. I simply lay back and indulged in the beauty of the bay. Redressed and deciding how long to allow myself to lounge around before continuing my ride, the boating couple walked my way. We admired the view together before the lady told me that they were going for a short walk to a cave around the bay and would I like to join them. Raywen and Barry were born and bred in Taupo and this cave was a cool little place known only by a few locals and the climbers and so I grabbed my shoes and wandered after them. As we walked Raywen told me how her mother used to come to the cave when she was a girl and that the path was strewn with bones from the Maori people. Luckily they've since been cleared but the faint track was strewn with boulders and roots. Raywen was tramping in her jandals (flip flops) which I thought was pretty impressive given the terrain and Barry told me that she was a serial tramper who'd tramped trails all over New Zealand.

Ten minutes passed and I wondered how much further it would be as I'd left everything on the shore and BB wasn't locked up. I needn't have worried though, I was in safe hands with the locals and the small entrance to the cave appeared. Walking inside it was huge and cavernous, much larger than I'd expected, you could have fit around eight cars in it. It was cool inside and there were a few remnants of mats from where the climbers had previously camped, it was pretty cool. I would never have walked along the trail if it weren't for Raywen and Barry and as I left them to walk around the point I felt so grateful that I'd taken them up on their kind offer. You really never know what the day will bring.

The final section of Great Lake Trails was called Orakau and was a six mile incline up to the Whangamata Road car park. It wasn't thrilling like the other sections but it would have been if I'd been riding it in reverse, haha. Reaching the car park and civilisation again I was sad to finish my Great Lakes adventure and hit the tarmac for the final miles of the day. I'm so pleased that I decided to take the harder riding option for the day as I didn't stop smiling all day.

Ten miles later and the tarmac led me to a gravel road down which I found the Kakaho camping ground. I was surprised to find it completely empty but it was a nice change from the hustle and bustle of previous campsites. That's been the only downside to my journey so far, the lack of available wild camping (due to all land being fenced off and a drought that has made finding water increasingly difficult) because campsites are not quiet places and I've found it hard to get enough sleep. All I can hear at this campsite is the sway of the trees in the wind, the bubbling of the nearby stream and the chirping of the birds - amazing.  Taking advantage of the lack of people I stripped off and had a wash in the stream as there are no showers here and it feels so good to wash the days sun lotion and dust away. I've just made myself a brew and will be thinking about dinner soon. A lovely end to a thoroughly memorable day's riding, happy times!

Another entry for the best postbox competition.... 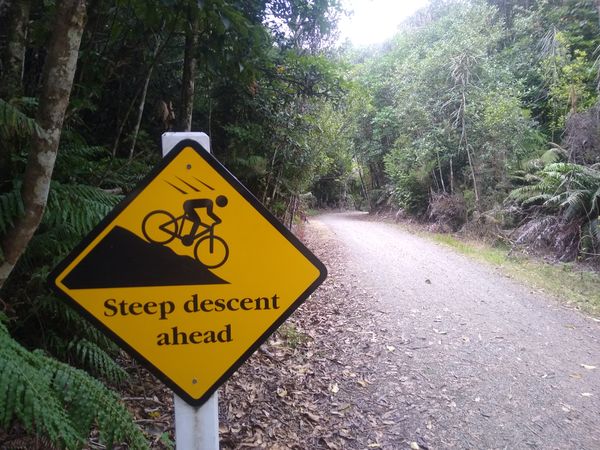 Up with the lark I was on the road at 8am after saying goodbye to Margot. After writing that I was all alone in the campsite last night I saw 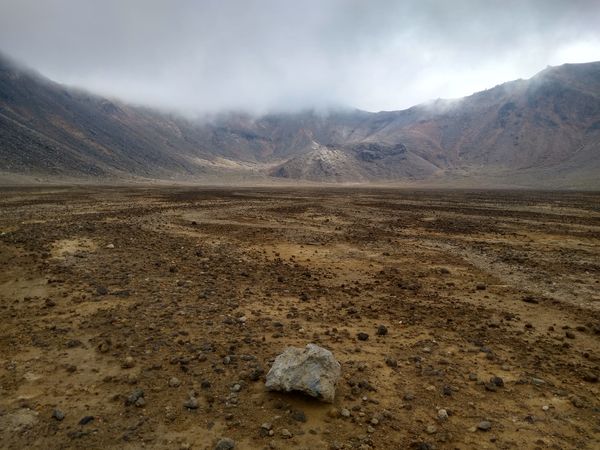 How time flies when you're having fun! It seems like only yesterday that I arrived in Taupo for my nice relaxing break and all too soon it's time to move