I am totally buzzing! Today I left my bags in the tent and hit the off-road trails to ride the legendary 29 mile Torridon circuit. I was a bit apprehensive going out to ride it alone as the guide book had rated it hard with a time of about 7 hours but at the same time I was ready for a different challenge to get my teeth into.

Starting the ride alongside Loch Coulin it was great to finally be on the trails, in the mud and enjoying the mountain views. Crossing the River Coulin there was a steady incline along the track and over the Coulin Pass. Then the first thrill of the day appeared with a cracking descent down into Achnaschellach station. There's nothing quite like haring down a gravel track, stones flying and greenery whizzing by. If the rest of the route was as good as this then this was going to be a day to remember.

After passing the station there was a bit of road along to Coulags where I turned off to head up towards Coire Fionnaraich bothy. The stony track was rather tricky as the rocks were wet and slippery. I came a cropper a few times on the stones and without the weight of my bags the back wheel was slipping in the mud and also the front wheel was rearing up when I was trying to get up the steeper bits. Adjusting my riding style would take a bit of practice as I'd spent the last 6 weeks riding road.

I'd ridden about halfway by the time I got to the bothy and so popped in to eat my lunch there. There was no one in so I took a look around and wrote in the bothy book. It's a really cosy place, I'd definitely come back here as it's in a lovely spot and it wasn't too difficult to get to.

Continuing on the track got much harder in places. There were also a lot of drainage channels and I saw one of them too late and couldn't get enough lift in time and so ended up over the handlebars and into the heather - luckily a soft landing!

For the next few miles I was on and off the bike and struggling to ride some sections. I was finding it rather frustrating as I wanted to ride but either couldn't get going again after falling off or it was just too rocky and steep. At least the views kept me smiling! Finally pushing The Beast up the last few rocky steps to the summit I was stunned at what was before me, singletrack heaven! Riding downhill around the edges of the lochs on a narrow ledge was thrilling and seriously focused the mind after a couple of close calls wobbling off to the hairy side of the track. This was just mental. My heart was hammering in my chest as I enjoyed the flow of the trail left, then right, up and down. Just as I thought it couldn't get any better, this happened... Absolutely divine! I felt giddy with glee and totally pumped with adrenaline. I think this selfie is one that I will always look back at to remind myself just how awesome this day was and how much I was buzzing, haha. Streams to splash through, smooth rock to ride on, views to die for and then a LONG descent through a rock garden that was brutally punishing on my forearms - wow. The constant hammering of the rocks had my brain tested in tracking the best route down and I stopped to take in the view of Torridon. I hadn't seen another soul all day until the last mile of the route when I came across a walker. I can totally see why this is voted in the greatest pieces of singletrack in the UK as it is the ride that just keeps giving.

Emerging in Annat I rode to the Torridon Inn and called my friend Barry to rant about my ride. I was on cloud nine. This was certainly a day to remember!

Today has been a struggle. After a really good sleep last night I woke still tired from yesterdays off-road ramblings. I figured maybe I'd had too much sleep and forced 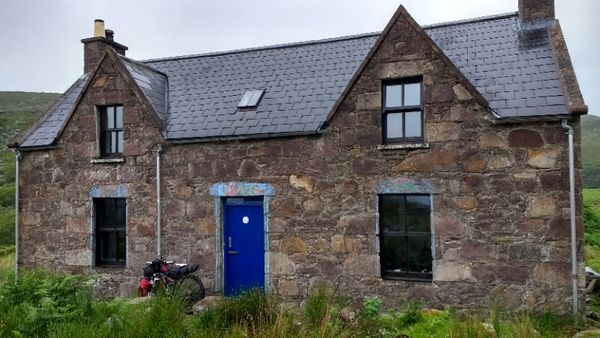 I'm tired this morning. I didn't sleep well at Leckie bothy last night, mostly because it was too quiet. That may sound crazy but when you're camping you hear the