Riding out of the campsite in the cool morning mist I was prepared for a long day's riding. First on the menu today was the gravel road up to the Maungatapu track followed by a four mile, seven hundred metre climb to the top of the mountain and down into Nelson. From there I'd pick up the Great Taste Trail and follow it northward, off the TA route to Kaiteriteri by the Abel Tasman National Park.

As I arrived at the start of the Maungatapu track climb I prepared for the uphill slog. The track was a four wheel drive track and a convoy of three vehicles had passed me on my way out here.

The track was in pretty good condition and I soon settled into my granny gear. The mist hung in the air and coated me with a fine spray which was nice and cooling as my body started to heat up with the effort of the ride.

Nearing Murderers Rock I saw a tiny patch of blue sky ahead. Riding higher the mist became patchy and thin and the day became bright and lifted my spirits.

Finding the group of off-roaders fixing an issue with one of their trucks I stopped to chat with them. They were on a tour of the South Island for two weeks hunting out the best routes off the beaten track. Continuing upwards the track soon changed, larger rocks and steeper sections that tested my muscles and had me working hard. As the convoy passed me again, I'd risen above the mist and clouds and had the most incredible view of the valley before me. It's moments like this that make me feel so alive as I'll remember them for years to come.

Pausing briefly to put some sun lotion on and eat a banana I heard a loud rustling in the bush behind me. Then came what I can only describe as a strangled, haunting bark which sounded like a cross between a howling monkey and a wounded animal. It most certainly wasn't a bird and it was loud and made the hairs on the back of my neck stand up. As the bush moved and the horrible noises continued I had visions of being stalked by some hideous man-animal and I soon hopped back on the bike to get the hell out of there.

Finding time marching on, my progress was stalling. The track deteriorated to large loose rocks. I'd hit a large rock and put a foot down and then it was impossible to start riding again as the back end would just spin out. I'd have to get off and push up the hill and then try to get back on again and the same thing would happen. With another hundred metres to the summit I started to get very frustrated at my slow pace.

Realising that my long day would be a bit longer I told myself to just chill out and suck it up. Pushing up this last section was going to be quicker than trying to ride any of it and actually I was lucky that it was just this last part that wasn't rideable. The final stretch reverted back to a nice rideable track albeit steep and I pushed on aware now that I had the four wheel drive group as an audience as I neared the top. Struggling on the last ten metres one of the ladies started to clap and shout encouragement which made me dig deep to finish the climb where I stopped for a breather and a chat with their group.

Feeling the chill from the breeze at the top I said my goodbyes to the off-roaders and started the descent that would lead me to the road and into Nelson. I'd been warned that it was a little hairy and so turned on my PLB and enjoyed the ride. I needn't have worried as the majority of it was very rideable and I revelled in the fact that the hardest part of the day was now behind me.

The road out to Nelson was a nice mix of gravel and road and I was pleased to arrive there just after noon, four hours and only twenty three miles later. Nelson was busy and seemed like a cool place to explore. There's a lot of mountain bike trails here and it's the gateway town up to Abel Tasman National Park and the Nelson Lakes but there was no rest for my wicked self as I wolfed down my usual tuna wrap for lunch. I still had forty miles of riding to get me to Kaiteriteri further north along the coast and I had to get there as I'd booked a full day of kayaking the next day.

Pushing on I picked up the signs for the Great Taste Trail towards Richmond and headed along the old railway track up and out of Nelson.

Riding along the Waimea Inlet was nice and scenic. The cycle path was smooth tarmac and for a while I had a wonderful tailwind as I sped the six miles to Richmond with renewed vigour for the afternoon ahead.

Turning off to head northward on the trail towards Mapua and Kaiteriteri I followed the inlet across to Rabbit Island where I would catch a little ferry over to Mapua. I was saddened to see that there were no rabbits here and that the island had nothing to do with rabbits at all as I pedalled my way beside pine forests and the sandy shoreline.

Arriving for the ferry thirty minutes early I was secretly pleased at the enforced rest stop as I was feeling my earlier pedalling exertions in my legs. A nice paddle in the cool, blue waters was reviving and I was sure that it would give my legs a new lease of life for the miles ahead. The ferry was pretty cool, it sailed right up to the beach and put out a ramp for people (and bikes) to board.

It was only a five minute crossing to Mapua and then time to hit the road again to Motueka. Quiet roads and rolling hills gave for scenic riding as the afternoon lengthened.

I was starting to tire and seeing another hill ahead sent me a tiny bit closer to despair as I willed the miles to pass. With twenty miles left to ride the route went off-road for a winding gravel course and my heart sank. It's a constant mental battle on days like this where all you want to do is to arrive at your campsite and be done with the day's riding. I just had to tell myself to breathe, enjoy the sunshine and to concentrate on what I was doing and not worry about the miles ahead. Back on tarmac I saw a service station and rolled in for a sugar hit. My second can of Coke for the day and hopefully enough juice to get me the rest of the way to Kaiteriteri. Sugar and chocolate have become my staple treats now, I crave them like a drug - it's normal for me on long tours and there are many worse things to be addicted to!

In the next few miles I began to understand why the route was named the Great Taste Trail. All of a sudden I was surrounded by orchards and fruit. Apples, kiwi's, pears, grapes....a fruitarian's dream! There were stalls selling local fruit setup outside every other house and I wished I'd had the ability to carry the cheap bags of produce available.

Following the turn off for Kaiteriteri I breathed a sigh of relief in knowing that respite wasn't far away. A deadly thought when cycling, to think you're there before you actually are as your body tends to want to relax immediately and the inevitable final miles turn into a hilly hell. Both of these were true as I inched my way up the last hill before descending into the bay.  Sunshine, beautiful sandy beach and blue sky greeted me but my mind didn't linger on the views but headed for the nearest (and only) shop for, yes, you guessed it, chocolate milk! Grabbing supplies for dinner I rode the last half mile to the holiday park and checked in for two nights. The final hurdle to setup the tent took time only because my addled mind couldn't decide on where to pitch and when I'd organised the last of my kit I slumped on the grass to rest and drink my milk. It was 6:30pm and it had been a long ten hours and seventy two miles - my longest day of riding on the trip so far. I could relax now knowing that I would be here for the next two nights to enjoy the delights of the Tasman coastline.

After showering and eating it was an early night for me. Waking not long after midnight for a wee I crawled out of the tent to a magical world. I've kept forgetting to mention one of the most amazing sights that awaits me every night when I inevitably need to get up to use the bathroom, the stars. Such an incredible array of twinkling clusters covering every inch of the night sky and the milky way is clear to see in all it's glory. There is no other sight that makes me feel so small and insignificant in the world and yet fills me with such joy and wonder at the pure scale of our solar system. A beauty that my camera can never catch but will be imprinted in my memories as I strain my neck to look upwards beyond our little planet. 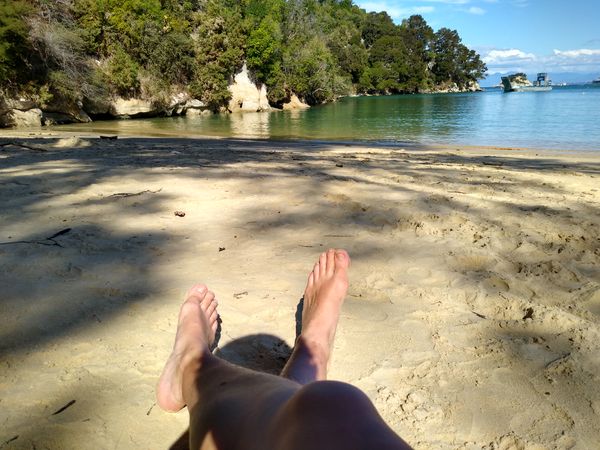 I woke excited for the day. Today I was swapping pedalling for paddling to spend the day on the water exploring the coastline and bays of the Astrolabe alongside the 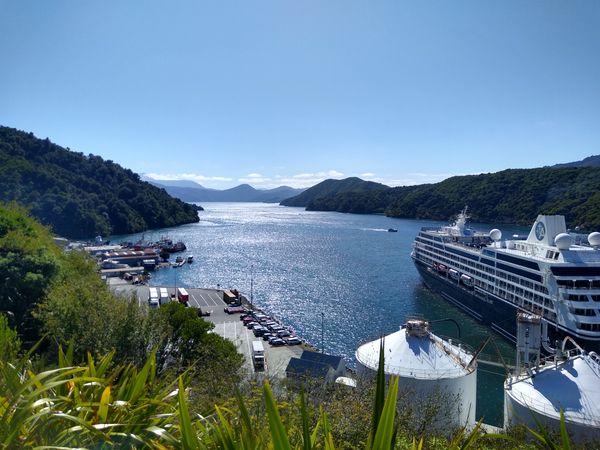 Up with the lark (or before it I think!) I was checked in and ready to cruise at 6:15am. Today I bid farewell to the North Island after thirty