I'm very happy to say that I survived the night without being washed away by the tide. I woke at 4am for a wee and the tide had come in but was still rather far away from my camp spot so I slept the last few hours knowing that I wouldn't wake to wet feet.

Hearing Lee packing up in the morning I poked my head out of the tent to see his stuff all ready and it was only 8am. I said good morning and he asked if I would be around for a bit if he left his bags and rode to the Co Op to grab some breakfast. I was only just dressed so told him I'd be here a while and so he offered to get me something for breakfast too, excellent stuff!

I was packed up by the time he returned and we both sat eating pain au chocolates on the picnic benches, a nice change to my morning routine of porridge - and he wouldn't take any money for it so thanks Lee for a cracking breakfast.

Today I was riding to the RSPB area on the west coast of North Uist. Generally the west coast of the Outer Hebrides has all of the nicest beaches and after a day of mountains and greenery riding along the east coast yesterday I was looking forward to seeing the other side of the island.

It was a bit windy still and I'd be riding into it for part of the day but doing a circular route meant that I'd benefit from the wind eventually. The sun was out and it wasn't long before the gorgeous views appeared. Riding along all of a sudden a large bird flew off from the moorland on my right and it flew alongside me and across the road. I recognised it as an owl of some description and it was fantastic to see it so close, today was going to be a good day.

I was at the RSPB area not long after 10 and decided to ride around it a bit as the little cafe van didn't start serving tea until 11. It was busy with tourists and eagle-eyed twitchers with large telescopes and cameras and I tried to blend in with my £7 binoculars and my Collins book of Scottish birds! I have seen lots of birdlife on my trip but trying to identify them with a book when there are about 3 pages of brownish looking small birds is rather difficult and so when I saw a group of people had stopped I asked them what they were looking at. It was a Twite, something I'd never heard of but could see it with my binoculars and felt rather proud of myself, haha.

Again the beach was beautiful with lovely sand dunes stretching for miles along the coast. After a brew and a chat with some people at the little cafe van I set off again along the coast. I'd read that there was a cafe further along the route and was looking for it when I came across a shop. Stopping to see what they had I was overjoyed to find that they sold individual fruit. It's a problem as most places just sell bags of apples or bananas and I can't carry them so me and Monkey were all excited about the tasty fresh fruit. I'd enquired about the cafe and it was told it was a few miles down the road and so continued on my way. It wasn't long before I went past what looked to be a house that said Westford Inn on the front. I figured it could be the cafe and so stopped to investigate only to realise that I'd found the only pub on North Uist - what a find! Tea off the agenda and with a bit of indecision on what to try I had a nice liquid taster of 3 different ales, Skye Gold, Skye Red and Fyne Ales Vital Spark. Feeling rather overjoyed at finding a pub as they are rather few and far between out here I felt rather peckish after my beers and the people around me had all ordered food which smelt so good. I threw the daily food budget out of the window and ordered a bacon and brie panini with salad and it was divine. The salad was so fresh and tasty, fruit and salad today makes this my healthiest day yet I think!

Sadly I had to move on and I took the moorland road that cuts across the island in order to take me back to the north so that I could ride up to Berneray and get the ferry across to Leverburgh on South Harris. Over the causeway to Berneray the wind had gotten rather strong and I was tired. I had wanted to ride the length of the little island but instead opted to just visit the shop to grab another beer to drink at the ferry terminal whilst waiting for my ferry. Outside of the shop they had a weather forecasting stone, a good giggle and oh so true. Arriving in Leverburgh early evening I rode east along the coast road to find a spot to camp for the night. I'd had a really good days ride and done quite a few miles and ended it with a lovely wild spot by the sea, happy days indeed. 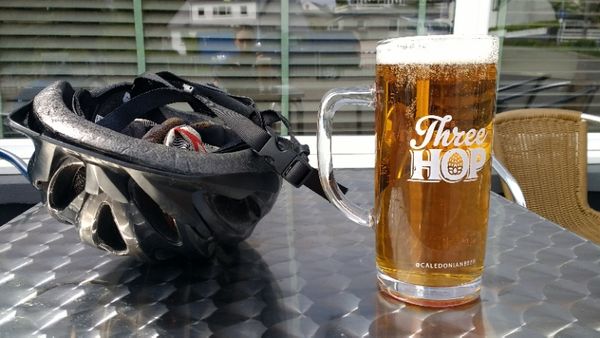 What an absolutely cracking day's cycling today. I'm sitting in the tent and it's chucking it down but even with a damp end to the day I'm still smiling! Waking 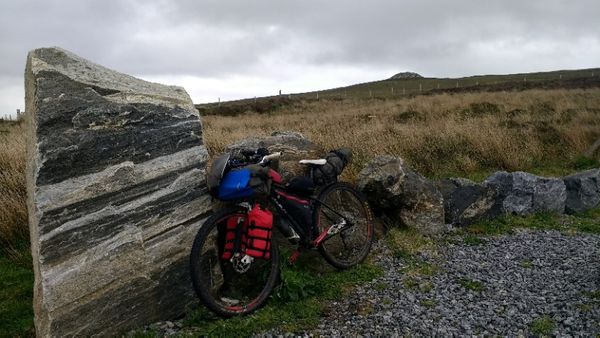 It's June today. This is my 5th week on my adventures but there are still many more islands to visit, many miles to be pedalled and many whiskies to taste!