After midgegeddon last night I woke to a scene of carnage in the tent. Dead midge covered the tent floor and the mesh was dotted with the squished bodies. It was still outside and they were lying in wait in the porch. No porridge making this morning, it was all I could do to manage making the water for a brew. As we packed up there was an occasional breeze but not enough to dissuade the little buggers and so we were on the bikes and riding away before 8:30am.

Riding up and over the moorland towards Glen Orrin dam was a lovely track. Just us and the deer as we followed the undulating trail. Here Charlotte had a wonderful moment when in search of a snack I offered her one of the McVities Gold bars that I'd bought in Carrich. Mmmm's of delight were mumbled through bites - it's funny how childhood biscuits can bring such delight as an adult, although they're distinctly smaller these days I'm sure.

The dam was visibly low as we reached the causeway which was surprising as we'd read that this area has the highest rainfall in Scotland. Thankfully not today!

In need of something with a bit more sustenance we stopped in a breezy spot (to keep those midges at bay) for a second breakfast. Charlotte brewed up a pot of porridge that she hadn't had this morning and I nailed a couple of mandarins. One of the joys of cycling is that we feed our faces regularly, I think this is why eating is one of my favourite pastimes.

With tarmac underwheel we cruised the descent into Marybank and then onto Contin where the village store there is the last shop we'll see for the next few days until Durness right on the northern coast. Overwhelmed by choice and indecision I ended up buying way too much food as I'd already bought a lot the previous day in the Cannich Spar. We decided to stop and eat lunch as there was a picnic table there - very decadent dining for us! Plus there was a tea/coffee machine and so it was a rather lovely hour long break.

With the sun now shining we headed onto forest fire roads up the hillside and we were sweating. The weather here is truly baffling. Freezing and windy one moment and then the wind disappears and the sun arrives before the rain starts and stops. The Great Scottish summertime is a fickle foe. Getting her solar panel out to charge her battery pack, Charlotte looked like some kind of bionic woman!

Over the bridge at Little Garve and we had to decide whether to continue on the GNT or take the HT550 route for the next few miles. We turned off for the hillier HT550 route and then decided on a little rest and snack before tackling the hill. An hour of sunbathing and drying our feet and socks later (oops) we change tactics and voted for the GNT route. A strong headwind was involved and the next miles although incredibly pretty were a tough slog into the wind.

I was definitely flagging and I'd even eaten fudge in an attempt to boost my legs and morale. The wind was wearing me down and I could happily have stopped for the day but we came to a compromise to ride for another hour and see how it went. We were back in the wilds, in a valley surrounded by high peaks and as the trail headed east a bit we lost some of the dreaded wind that had battered us. The views were stunning as we pedalled away ready for a bit of a downhill reward to Deachin Lodge in Alladale wilderness reserve.

With the wind waning and the trail flattening out alongside the river the next few miles felt much easier. Starting to search for a camp spot it seemed like now we wanted one there wasn't much choice, typical really. The only criteria was that we wanted to be in the wind to stop another awful night of being held hostage in the tent by a swarm of little biters. Deciding on a spot by the road overlooking the river it was rather windy and not a bad view at all.

Pitched and sorting our stuff, a Land Rover came past and then stopped and the man got out. Even though wild camping is legal here in Scotland I expected he might tell us to move on but he was just letting us know that there were cows nearby with calves so to be careful. Fingers crossed they'll leave us alone as we're a bit higher up on the hillside but they are notoriously nosey animals.

Feeling pretty grotty and dirty I nipped down to the river and stripped off for a refreshing wash. It was a bit fresh but invigorating and I felt like a new woman! Another lovely day's riding, particularly this afternoon in the sunshine, it almost felt like summer, haha. As I've been writing this, the wind dropped and the midges are back :-( it's crazy how such tiny little things can make you so miserable. Ah, the trials and tribulations of summertime camping in Scotland! 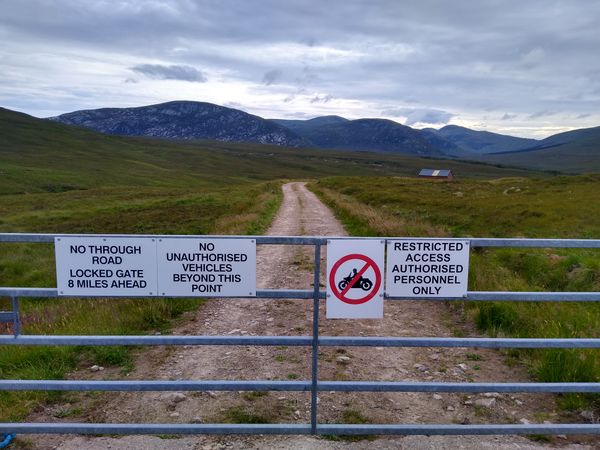 Waking to stillness my heart sank again with the inevitable little midge visitors. Fast packing was the theme of the morning with every piece of skin covered and headnets donned. 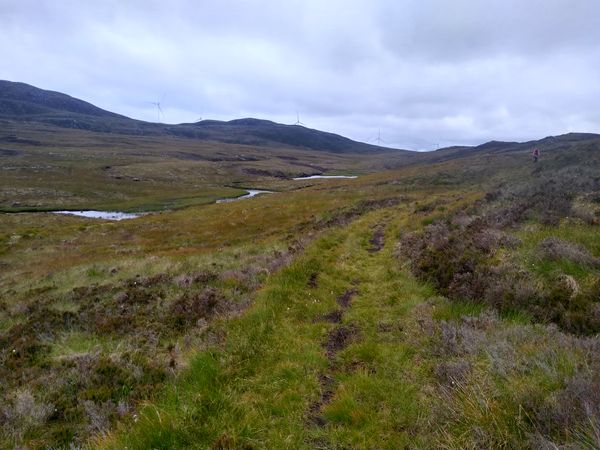 I'm sat in my tent overlooking the beautiful Lochan Fada near Struy and there's not a whisper of a breeze in the air. It sounds idyllic doesn't it? Now imagine