I'm sitting on a woodworm riddled bench writing this. The wind is howling outside and the tin roof is rattling like there is no tomorrow. The rain is lashing the windows and I feel the breeze swirling around the room. This is Scotland and thankfully I'm inside!

Today I woke up to rain on my camp spot by the harbour in Port Askaig. I felt tired, the lifeboat was called out just after 2am which woke me and I seem to have tossed and turned after that. The rain wasn't going anywhere so I ate my porridge and packed up a wet tent. I headed south on the back roads to Port Ellen and and it was pretty grim with rain and a headwind. The landscape here is just hills and heather and I've only seen maybe two cars in the last hour. The rain comes in fits and starts but the wind doesn't ease and that's my biggest enemy today. It's times like this when I wonder why I do this. The answer is that I only need one thing to change to make it better - maybe the rain will stop, the wind will change direction, the sun will come out or I'll see some wildlife or a view that takes my breath away. Then all is well and I smile and know why I'm out here in the rain and wind cycling along by myself. It takes most of the morning but I arrive in Port Ellen as the sun is trying to get out. The rain has stopped and I eat my lunch with a nice view of the bay. The next 3 miles are known as the Three Distilleries Path as Laphroaig, Lagavulin and Ardbeg distilleries are all on this one stretch of road. No whisky for me today but I do stop for a nice big pot of tea in the Ardbeg cafe which warms me nicely. I'm headed further north along the east coast of Islay past Ardtalla to Proaig bothy.

From the Islay blog website it seems that Proaig played a role in illicit whisky distilling (not backed up by books though), sheep farming, acted as cattle station on one of the drove routes and Proaig Bay acted once a safe haven for a mail steamer in distress. The historical guide for Islay, Jura and Colonsay by David Caldwell has the following information: "Proaig is a mid 19th-century shephard's house and sheepfold. The complex stands on a platform adjacent to a shelving shingle beach, with the possible remains of an earlier house projecting at the back of the present one. The name is a Gaelic version of the Norse for "broad bay". Proaig was at the end of an old drove route from Storakaig, off the Ballygrant-Cluanach road (Glen Road). It belonged to the MacArthurs, hereditary pipers to the Lords of the Isles.

The 7 miles of road lead me to a nice beach area just before Ardtalla and I stop to say hello to a man who just got out of his car. He was born and bred in Islay and when I ask about Ardtalla he tells me it's just up the road but asks where I'm going. I mention the bothy and he tells me it's a few more miles up the coast but I won't get there by bike. That wasn't exactly the answer I was hoping for but I tell him I'll take a look to see how bad it is and wish him a nice afternoon. He wishes me good luck! The track ends and the field begins and I can see his point, the ground is very rough, too rough for cycling but I decide to push the bike for a bit to see if it improves. I've got OS maps on my phone and so know that there should be a rough footpath that takes me there but it's never that easy. Finding the first place to cross a stream takes me longer than expected but I tell myself I'll continue as long as I can see a track. After a while I noticed that my sunglasses had gone, uh oh, it's the only pair I have and so I left the bike and had to retrace my steps back to the last gate, 10 minutes lost but at least I found my sunglasses. It was pretty wet and muddy and The Beast is heavy which means only one thing, sinking! Some ground is rideable but to be honest it's quicker to push the bike than to use more effort trying to ride it. The heather gives way to bog and it isn't long before I have wet feet but that was to be expected.

We slog on though bog and heather following the faint track. It's hard going and my arms are killing from pushing The Beast but I know we're going the right way. There are a couple of times when I stray from the track but it appears in the distance and I head in the right direction again.

I'd seen a photo of the approach to the bothy and as I crested a hill it was real and in front of me - woohoo. The view down to the beach and the bay and the little spec that is Proaig bothy. Finally a bit of downhill and some of it actually rideable. I'd been pushing the bike for an hour and I was so glad to see the bothy in the distance and really happy to see it had a roof as there wasn't many reports about the state it was in that I could find from recent years.

One last wet foot moment crossing a stream just by the bothy and we'd made it. Walking around the ruins of the old bothy first I then opened the door not knowing quite what to expect. Nesting birds screeched and flew out of site by the chimney and I could see the inside in all it's glory. I had suspected that it would be very simple and on first glance it looks like a dump but I've been here for a few hours now and it's growing on me. I've setup my tent to try and dry it overnight and put my rollmat and sleeping bag on the bed and it's looking a little more homely. This is my first ever bothy experience and I'm sure it will stay with me forever. I'm guessing I won't sleep much with the rattling roof and the chirping birds but it's a place of refuge and one which many before me have visited. On the bench are two books full of messages by people who have come before me and tomorrow morning I hope to be able to add my own message. For now I shall sit by the window and watch the waves, the weather and the world go by. 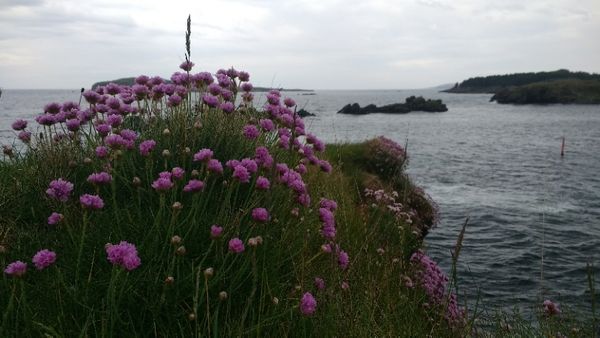 The journey out of Proaig and back to Ardtalla was much easier this morning. I followed a track closer to the coast and it was about 20 minutes quicker although 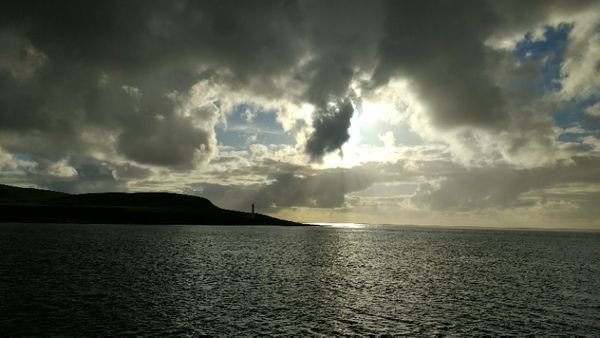