All snuggled in my tent and ready to sleep just after 10pm last night I started to hear strange noises. I ignored it for a while and then heard mooing. Poking my head outside of the tent there were highland cows crossing the river towards me, uh oh! I figured if I pretended that they weren't there then they would just leave me be. They seemed however to then congregate right by the tent and boy there were some large beasts there. Huge cows or bulls, I couldn't see, standing right by the tent and they of course had young ones with them which means I get even more nervous as they might be rather protective. This went on for a while before the grunting, snorting and foot stamping became a little too close for comfort for me, right by my head. I imagined those horns ripping apart my tent and skewering me and so I got out of the tent. The cows were startled but didn't move, in fact one of them came even closer. The grunting of one of the bigger ones didn't sound too good and so I started to talk to them, explaining why I was on their patch and that I just would like a bit of space. There is something about those horns that is so intimidating and I really wasn't sure what they would do. They were all staring at me and so I went back into the tent again hoping that they were just passing through. About ten minutes and no more mooing later I stuck my head out again to find that they were now on the other side of the field, ah, I can sleep in peace at last! Talking to them reasonably obviously did the trick, haha. Thankfully the rest of the night was uneventful on the cow front and as I rode past them this morning I waved a goodbye. The road west to the Iona ferry at Fionnphort was undulating and not particularly scenic due to the shrubbery at the side of the road. I was lost in my own little world, thinking about everything and nothing at all and settled into the rhythmic spin of the pedalling. Stopping at Bunessan for a pot of tea I was only 5 miles from the ferry terminal when it first started to drizzle. I may have spoken a bit too soon yesterday when I said summer had arrived, as after 2 days of sunshine today it was overcast and breezy. As I continued onto Fionnphort the drizzle diminished and after restocking on some food supplies in the local shop I was just in time to hop on the ferry over to Iona. The harbour beach was beautiful white sands, sublime. Again, I couldn't have timed it better as there was a tour boat heading out to Staffa island in 30 minutes and I booked myself onto it. It was currently blue skies so I thought it would be best to take advantage of the weather rather than risk taking the tour in the morning - little did I know what was in store from the weather Gods.

The boat out to Staffa would take just under an hour and it lasted 20 minutes before the rain started. We took a little detour by one of the islands to see a seal chilling on the rocks. It was quite windy and so the crossing was quite choppy and by the time we arrived it was really starting to rain heavily. The guys on the boat offered us waterproofs and I willingly donned a massive yellow fishermans coat which was down to my knees. Where we docked was surrounded by wonderful columns of volcanic rock, similar to those I'd seen yesterday whilst looking for the illusive fossil tree. I walked along the basalt columns to Fingals Cave. It is named after the legendary Irish giant Fionn MacCaul (Fingal) and is 230 foot long, 60 foot high and 50 foot wide, the biggest on Staffa. Very impressive, the roar of the sea was echoing off the walls and there was a feeling of raw power and grandeur to it. With only an hour on Staffa I headed back and up the steps to the clifftop.

Walking to the north part of the island I was hoping to see puffins. I couldn't believe my eyes when I reached the end, they were everywhere, nestled on the grass on the clifftop and flying around the cliffs. We were told by the tour guide that the puffins know that the boats and humans scare off the other birds and so are happy when they are around as it means no other birds will appear. They were not bothered a jot as I sat down on the grass right beside them. They are small birds and absolutely beautiful, the colours on their beaks bright and bold. Seeing how lovely they were and being so close to them almost made me regret having eaten one when I was in Iceland a few years ago.... but it was rather tasty!

The rain had stopped once we boarded the boat for the journey back but the wind had picked up and this meant a very choppy crossing with the boat swinging from side to side and the waves spraying us. It was like being on a rollercoaster coupled with the water from the log flume! I was fairly dry thanks to my huge waterproof jacket/dress and as we arrived back on Iona it was dry and calm.

Today has passed in a blur. I feel privileged to have seen puffins so close in their natural environment, it was really lovely. I also have a whole island to explore tomorrow as I didn't get to see much of Iona today. I rode over to the west coast to pitch for the night and all I can hear right now is the sound of the tide washing up on the beach - and the odd sheep of course! 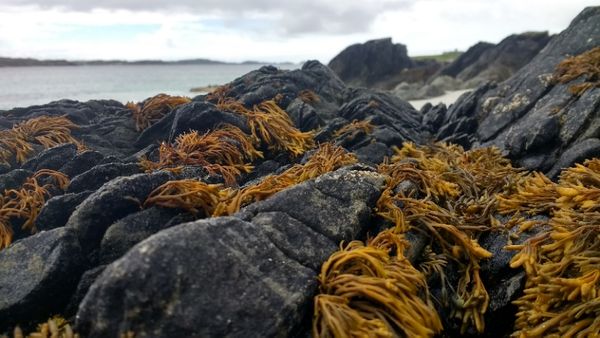 It's 6:00pm on a Friday night and I'm sat in my tent listening to the rain outside, I really know how to live it large! This afternoon has been 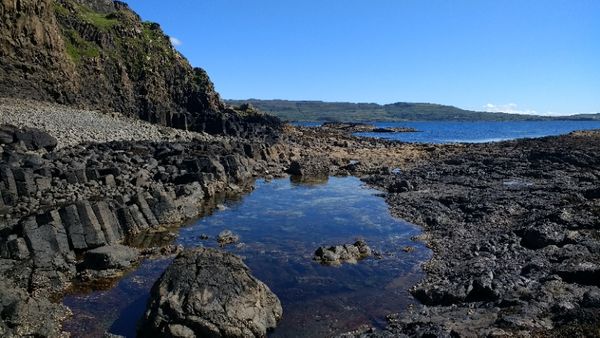 I woke early to an already hot tent and looked outside to see blue sky and sunshine, summer is here I think! It was so hot that I had to