The drought is over! After a record breaking 47 days without rain, the North Island was blessed with the wet stuff today. I was up and ready just after 8am this morning as I didn't want to pack away a wet tent and as soon as I had started to ride it started drizzling. Today I was riding the Hauraki Rail Trail  east from Miranda Springs to Kopu along the Firth of Thames and then heading south for Paeroa, Te Aroha and Matamata.

The drizzle was refreshing and it was still warm and humid as I turned off the main road and onto the gravel path. Winding through the marshlands there were pukeko (swamp hens) everywhere and lots of other birdlife. There was a strong northernly wind that was everywhere but behind me but the views of Thames over the Firth were always present in my view.

Arriving in Kopu I was lucky that the historic Kopu bridge was open. Built in 1928 it is one of the only swing span bridges in New Zealand that is still in use and they had opened it especially for the TA brevet event.

Now I was heading south and I had a tailwind, wooohoooo! Plus the trail was as flat as a pancake and I was smiling from ear to ear. This is exactly what I needed today, some nice flat and fast riding with lovely scenery. The rain eased off and there was just the odd drizzly shower, it was blissful.

Nearing Paeroa the heavens opened and I was lucky enough to find shelter in a bandstand right at the end of the high street. There were a few other cyclists seeking respite from the wet and it was nearly noon so I decided to have an early lunch and hope that the rain  would ease in the meantime. After a quick resupply of porridge and muesli bars in the local supermarket I decided to continue in the rain, after all I'm British, it's just a bit of rain and it's certainly not cold. Well as soon as I started riding the rain intensified until I was riding uphill with a torrent of water running towards me. I laughed, I was completely soaked now down to my underwear and my shoes were heavy with rain. There's only one thing to do in this case and that is to sing a song about the weather and so I started to sing Prince's Purple Rain.

Continuing towards Te Aroha I was all alone on the trail and then I saw a sign from above. It said 'Devonshire Cream Teas'. It was only an hour since I'd eaten lunch but it seemed like the universe was sending me a message. It was raining and here was a sign for a good British treat and a personal favourite of mine and so I went with the flow and followed the signs. There were two bikes there when I turned up and so I chatted with the other bikers as I peeled my sopping gloves and helmet off. Before I knew it a pot of English Breakfast Tea wth a scone and a huge helping of cream and jam sat before me like a tiny bit of heaven. A taste of home, sat in an English style country garden with roses and eating a fine tasting scone, it was truly delicious.

Content and full I saddled up again to finish the rail trail in Te Aroha. Nestled at the foot of Mount Te Aroha (mountain of love) it's a historic spa town but there'd be no spa for me here as I'd decided to continue another 20 miles onto Matamata. As the trail ended I loaded the map on the GPS only to find that it thought I was in the middle of the ocean. Looking at the statistics, apparently I had ridden 24,717 miles today - pretty darn impressive considering that the last time I had checked it had said 42 miles. A reboot didn't fix the issue and I was stood fiddling with it under a shelter out of the rain when two other cyclists appeared. Harley and Geoff were looking for the way to Matamata as well and neither of them had a working GPS. It was too wet to have my phone out with the map on and so we rode into town to see where the route went. Ten minutes later we were back where we had started and heading south for Matamata. I was glad to have some company in the rain and Geoff had managed to get his GPS working and so I told myself I'd have to try hard to keep up with them to finish the day's ride. Luckily I could keep pace and we had a nice tailwind pushing us along the road. It was nice to ride with others, we had a little chat at times but it's just good to have a reason to keep pedalling and to ride as a group, I haven't done that since working last October. I'd tried turning on my GPS again but it wasn't quite right. I could see my speed though and we were cranking along between 16 - 18 miles per hour, fantastic progress.

I wished them well and said my goodbyes a mile or two outside of Matamata to turn off for Opal Springs Holiday Park which had been recommended to me by Aimee who I'd met right at the start of my trip. It was 4pm as I started to put my tent up and I just had time to throw my things in the porch before the rain started again. A quick shower to wash the muck off my legs and I spent the next hour slowly poaching myself in their outdoor hot mineral pool. Thirty nine degrees of leg restoring warmth and only the sound of trickling water, a fantastic end to the day.

It may have been wet today but it was a great day - such a contrast to yesterday. These are the ebbs and flows of cycle touring, everyday is different and you never know how the day will unfold - well today was certainly a good one! 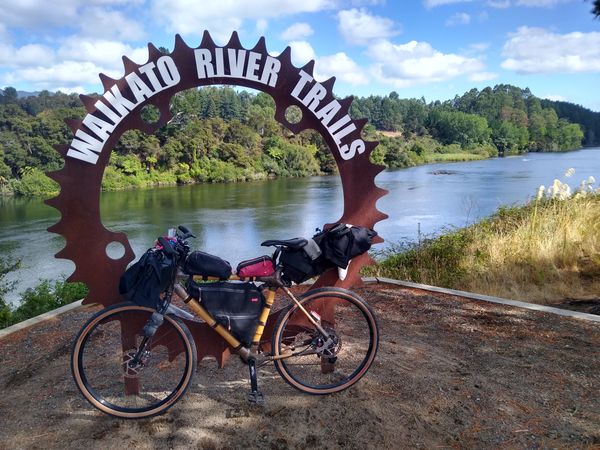 I started the day riding through glorious Hobbit country. Lord of the Rings and Hobbit fans drive here in their hoards to visit the Hobbiton movie set just southwest of 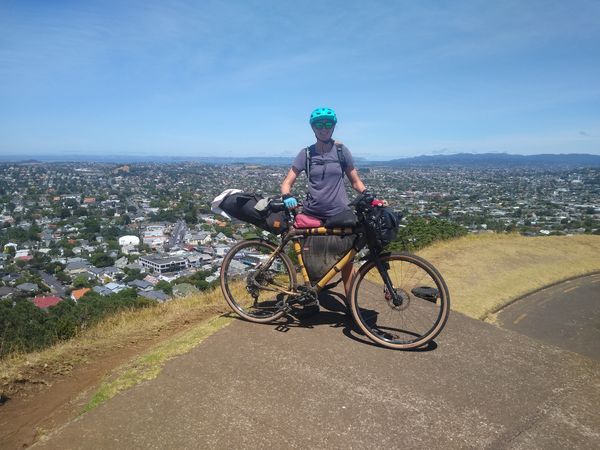 Well I decided to keep moving and so yesterday I packed up and started the long, hot climb out of Murawai beach. Murawai beach to Miranda SpringsI felt surprisingly good