It had been raining for most of the night but this morning when I woke it had stopped. I peeked out of the tent to see a sky of grey rain clouds and not long after I heard the familiar pitter patter of raindrops. I've been completely spoilt with glorious weather so far on my trip so I shouldn't complain at the first sign of rain but I have to admit that I hate putting away a wet tent. Just to add insult to injury the rain stopped just long enough for an army of midges to arrive whilst I was packing up and the lazy girl in me didn't want to unpack the midge headnet and so I suffered and flapped and swore, quite silly really and a lesson learned.

Today the plan was to cycle around to Lamlash Bay on the east of Arran. It's a Saturday and so should be busier on the island with tourists but the rain has kept them indoors and there's no-one around as I cycle into Blackwaterfoot looking for a cafe for a cup of tea. Finding 'On a Roll' I take refuge and treat myself to a bacon and egg sarnie and a cup of tea, delicious. Feeling a bit more ready to face the rain I hit the roads and continue east with nothing but misty hills and road for scenery.

Freewheeling down a nice 20% gradient hill I nearly miss the cafe on the left hand side and come to a stop by the adjoining hotel. It's a bike cafe, Velo Cafe in Lagg and so it would be rude not to stop for a brew especially when there are lots of bikes already there. Heading inside I'm hit by a wall of heat and chatter with wet clothes drying by an open log burner and a fantastic array of cycling memorabilia adorning the walls. I must have looked a bit stunned but the lady serving immediately said hello and asked what I'd like. Settling in a corner with my tea the group looked as if they were ready to get back on the road and I thought I heard familiar accents so I said hello to a couple of them as they were getting their kit sorted. Low and behold they were a cycling club from the north east who come to Arran every year and I talked to a few of them who were either from or worked in Sunderland, rather nice really. The owner explained that they'd only been open for 8 weeks and that things were really good and I told her about my trip and my blog and she took my photo to put on their Facebook page, pretty cool.

I had to make tracks if I was ever to get to anywhere today so reluctantly left the nice roaring fire and hopped back on my bike. Making it to Kildonan I stopped for lunch with a nice view of Pladda. It wasn't long before a couple came along and said hello and it turned out that they were on the same ferry as me coming over. They lived in Edinburgh and we chatted for quite some time, them giving me tips on places to go on Mull of Kintyre and just talking about life really. A lovely couple and we said our goodbyes with them promising to follow my blog for updates. Today was turning out to be a super sociable one after a slow start because of the rain.

Just short of Whiting Bay I decided to take a detour and visit Glenashdale, Arrans tallest waterfall. Riding up the track the woods were full of bluebells and wild garlic and the smell was intoxicating. Turning a corner I couldn't believe it as I bumped into the same couple that I met last night at the Kings Caves! Stewart and his wife (my apologies if you're reading this but I didn't catch your name) were coming down from the waterfall and we stopped to chat again and I gave them the details of my blog for them to follow. It was really nice to see them again and it would be great to keep in touch.

Things began to get rather steep and it was time to get off and push and the rain was a welcome relief from the sweaty effort of heaving The Beast up the last lot of steps. There was a great viewing platform and it was a nice change to see my first waterfall. Now for the fun part, the descent in the rain on the bike, woop. The way up had been rather slippery and full of tree roots but the other track down was lovely singletrack through the woods and then a long gravelly path, great fun.

Arriving in Lamlash Bay early evening I rode along the shoreline and couldn't find any suitable camp spots and so headed towards Brodick as there was a viewpoint and some woods which could do quite nicely. Finding a picnic area with a sneaky little area just big enough for my tent I pitched up and went to get some water from a nearby stream. I was in my tent when I heard voices a bit later and so poked my head out to see two cyclists with the same idea as me. I think I surprised them shouting hello from my hidden spot in the trees but they were friendly enough. Dave and Phil from Yorkshire had just come across on the ferry that afternoon and couldn't get a room in a B & B and so had to settle for a night in their tents. I left them to get their kit setup and cooked some dinner, it would be quite nice to have a bit of company for a change.

It's raining again now and so I'm retiring for the night and tomorrow I'm going on a boat trip to Holy Island so I will be up bright and early to get the first boat out. Another island to explore! 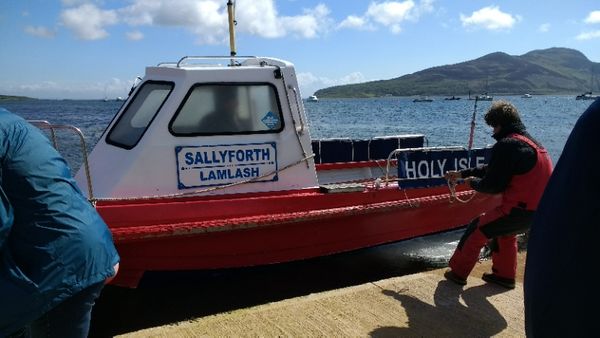 Hearing Dave and Phil packing away this morning I knew that I had to make a move. Woken at 2am by their bike alarm going off, it had taken me

Waking to a misty drizzle in the bay I packed up and was on the road for 10am. Todays plan was to cycle the few miles to Portavadie, get the