Up with the lark I was on the road at 8am after saying goodbye to Margot. After writing that I was all alone in the campsite last night I saw a biker arrive and it was Margot from New Caledonia. She'd just finished the timber trail and so we chatted for a while and I quizzed her about the route. It was nice to have a bit of company after all.

To get back onto the TA route was roughly four miles of riding and the last tiny section was a random hunters track that lashed me with thorns and gave me an early morning workout taking BB down a very steep, loose mud hill to a stream, across the stream and then up a similarly horrible steep section. My guns are definitely getting a workout too!

The Timber Trail is an 85 kilometre (52 mile) route from Pureuora to Ongarue through stunning native cloud forest that was once home and work for many hardy timber loggers of times gone by. The TA route joins the timber trail after a mile or so but I'd been told by one of the guys in a bike shop in Taupo that the first section of singletrack was very nice and so I decided to put in the extra pedalling so that I didn't miss out.

It wasn't long before the climbing began and it was a long seven sweaty miles up to the highest point of the trail. Luckily it was overcast and much cooler than previous days but it felt rather humid in the cover of the rainforest. Finally the fun could begin with a mammoth downhill section covering nearly twenty miles. An hour into the descent I was beginning to think that it would never end. My calves were pumped from being out of the saddle, my arms were aching from the almost constant bumping of the terrain and my brain was tiring from having to concentrate so hard to pick out a line to ride. I'd forgotten just how taxing off-road descents were and then it started to rain. I was a few miles out from the campsite, soaking wet and still going downhill. I passed the trail lodge and stopped to check the sign out by the roadside as I didn't actually know where the campsite was. A fellow rider who I'd been playing leapfrog with all day stopped beside me and asked me if I'd lost anything. I turned to check my flip flops were still in place on my saddle bag and told him that I hadn't lost anything. He repeated himself twice and then rummaged in his bag and brought out an inner tube and strap which I instantly recognised as the one that had been nicely attached to my front fork. After thanking him profusely he went into the lodge and I trudged on to the campsite. Now that was a touch of luck - I only have one spare tube. The trail angels were definitely on my side that day.

Arriving at PiroPiro flats campsite I headed for the shelter where I met Cassie, her dad and her friend Gracie. They were cooking some lunch before continuing to finish the timber trail whereas I was finished for the day and it was only 2:30pm. As they left to ride on the rain stopped and I got my tent pitched and settled down to relax, recover and regroup.

Waking to the morning mist I had breakfast in bed and rummaged to find my arm warmers. It had been a rather fresh night and I knew it would be a bit nippy start to the day.

Back riding through the rainforest I was climbing above the low lying mist as the sun was trying to burn it off. All I could hear was the birdsong and the familiar swish of my pedalling, it was wonderful. Catching up to the rider ahead of me I realised that it was Nigel who had come over to introduce himself at the campsite the night before. We chatted for a while as another rider Stephen joined us. They were riding the Kopiko Aotearoa, a new brevet event from east to west across the North Island and the Timber Trail was where both events crossed paths.

The day was warming up and with the variety in the riding of the second part of the trail I was loving life. The views out over the forest were incredible and following the old tramway route was an easier ride than the previous day. The tramways were laid by the loggers in order to extract the timber from the forests. Once a section of forest had been cleared they would take up the tracks in order to lay them down in a new area as it was so expensive to buy the tracks.

After riding over the Mangatukutuku bridge the trail down to Ongarue was back to chalky singletrack that hugged the mountainside.

I rode into Ongarue at the end of the trail and ate some lunch outside the backpackers hostel. It wasn't long before I was joined by Stephen and Nigel and we chatted for a while before parting ways for the final time.

The afternoon was hotting up and my final miles to Taumarunui passed by in a glorious gravel road that was a joy to ride. It seemed strange to arrive in a town again with people and traffic after a few days of riding the mountains of the Pureora. Parking up by the supermarket it was time for a restock as I had just eaten my last snack bar. Arms laden with food for the next three days I waddled outside to find another rider also filling her bike with food. We chatted and I introduced myself only to find that the lady was called Judith and I'd been following her progress and photographs on Instagram. She then laughed and said, 'ah yes I follow you too, you're the bamboo bike lady'. It's a small world! We were headed for the same campsite and so pitched our tents together in the biggest shaded spot we could find.

It was early afternoon and having not showered for a few days I was looking forward to cleaning my sticky sun-lotioned body. An hour later I was a new woman, clean as a whistle and with hair that didn't stay in a ponytail when I removed my hair bobble, haha! Having washed my clothes I hung them out to dry and spent the next hour cleaning BB. Someone once told me, 'look after your bike and your bike will look after you' and I figured BB felt just as good as I did after her ablutions, bolt checking and tightening and chain lubing. We were ready to ride another day. Not forgetting Monkey of course who was ready with his new stash of bananas. 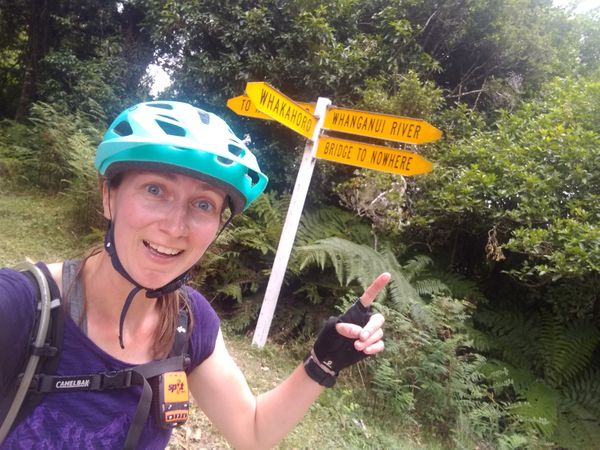 It was an early start out of Taumaranui in the morning as I had a big day ahead. Forty miles to the Blue Duck Cafe, thirty of which would be 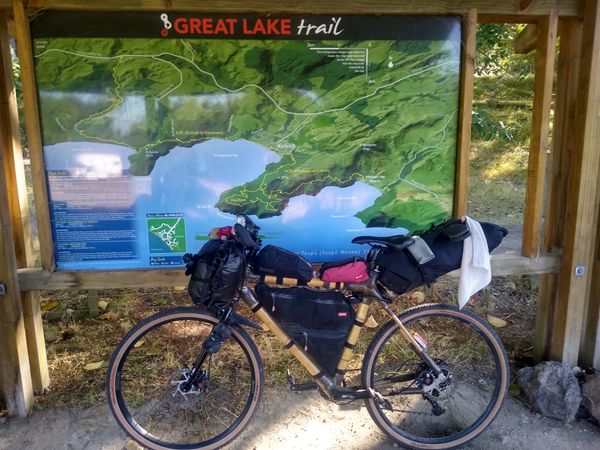 I'm just going to come straight out with it - this has been the best day of my trip so far! I wouldn't have thought it at 6am this morning