After a lovely rest day with Ben and Till in Rhenigidale yesterday, today was a harsh wake up call.

I think today was the toughest 30 miles of the trip yet. 30 miles of strong winds right in my face so that I even had to pedal hard on the downhills, never fun! Only a few rain showers though and very well timed to coincide with being under a shelter mostly.

The best thing about today was that I wasn't alone and was riding with Ben. It's the first time on the trip that I've ridden any considerable distance with someone and I really enjoyed it, particularly riding in his slipstream, hahahahaaaa!

We were both headed north, me as far as Liurbost where I intended to take the road west and Ben north up to Stornoway. It wasn't the easiest of starts to the day some stinking great big hills but having someone to chat to and laugh with and share the pain with was a great boost. On the downhills Ben would soon overtake me and in his own words said, 'you can never beat a fat lad down a hill'!

We made good progress with the first 15 miles and were feeling pretty good. The relentless wind is pretty soul destroying though and you soon notice how much extra effort you're using just to keep going. When a sign for an inn appeared we happily took the mile detour just to get a brew. Walking into a nice room with a fire going in the corner could have been a bit of a mistake though as after a pot of tea neither of us wanted to go back out into the evil wind.

After quizzing the owner about a shop at Liurbost we braved the wind again and jacketed up for the ride. I'm guessing it was only around 8 or 9 miles to Liurbost but good God it felt like 20. Knees aching, thighs burning, face whipped by a neverending stream of wind, I think we were both starting to seriously flag. Happily I'd convinced Ben that we should wild camp as soon as we'd found the shop and he was going to join me tomorrow west to the bothy, yay.

That last hill was long and slow and it took pretty much everything we had to get there. Knowing you're close can cause the body to relax and think it's finished and it wasn't quite over yet. Stocking up on essentials and cake and chocolate we managed to avoid yet another soaking whilst in the shop, this was getting freaky how well we'd avoided getting wet.

We headed straight for the moorland just over the road and made swift decisions on a spot right next to the path just so that we could take a break. Tents up and Ben went for a nap whilst I got changed and just lay down. I was exhausted, more so than when I'd done many more miles than today but that wind really makes you work so much harder. Doing that day after day would really not be fun. It was only just after 4pm and I was ready for a sleep but didn't succumb, it would only mean no sleep tonight.

It's now 7pm and we've eaten and I really am pretty ready for bed. I'm looking forward to tomorrow and hoping that the wind will be in our favour or just not in our face, fingers crossed.

PS. You know it's a bad day when you've taken no photos! 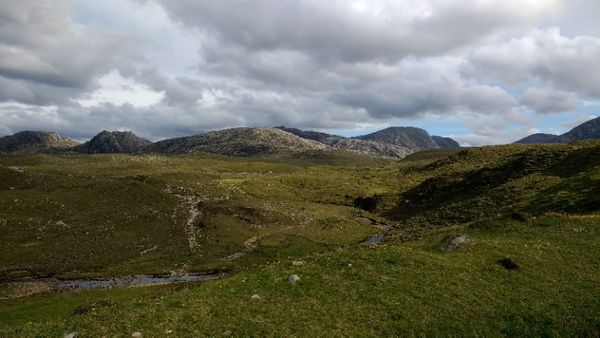 It's Wednesday today and we were sat in a cafe just after 9am waking up with a big pot of tea. We're headed west from Liurbost to Mangersta today via 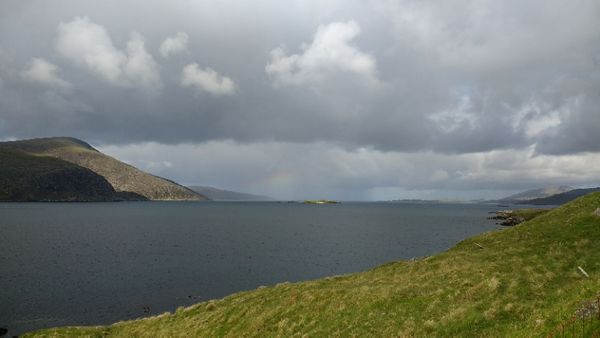 After a few rather long and heavy showers last night I was happy to feel the sun warming the tent this morning. I was up and ready to roll early