The evening sun last night over Skye was really special, one of those views that makes you sigh and think that things just couldn't get any better. 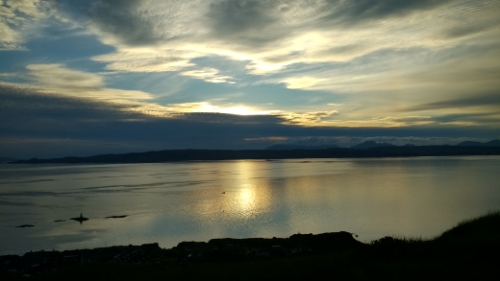 After heavy rain during the night I woke to grey skies this morning. The first thing to go wrong today was that I managed to lose a contact lens - one minute it was on my finger heading for my eye and the next it was gone. Trying to look for a contact lens in a tent with only one eye is not an easy task I can tell you and after 15 minutes I resigned myself to the fact that I had to wear my glasses because guess what, I had no spare lenses. I was so focused on packing 3 sets for 12 weeks that I didn't bring any spares and the really annoying thing is that this isn't the first time I've done this, I had the same problem last year on my Devon coast to coast trip and I thought I'd learnt from that one but obviously not! Luckily then I was in a town where I managed to get a lens from an opticians, not a chance of that happening here as the nearest one is in Fort William about 50 miles away.

Stupid moment number two happened shortly after as I somehow managed to wee on my leg and my sock! It was windy and I wasn't paying attention and before I knew it I had a nice warm ankle and wet shoe. Today looked like it was just going to be one of those days.

I was bound for the Isle of Eigg today and would be staying in the hostel for the night as I am in dire need of a wash and so is pretty much every piece of clothing I own - even I can't stand the stink anymore and that's saying something. It started to drizzle as I got to the ferry terminal and it was forecast to continue throughout the day. 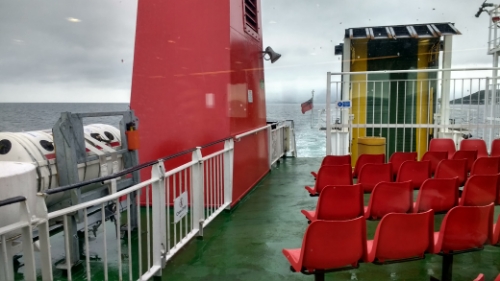 The word Eigg in Gaelic means 'notch' after the distinctive sloping ridge of lava rock called the Sgurr. Low cloud and grey skies meant that I couldn't even see it when the ferry docked but at least the rain had stopped. 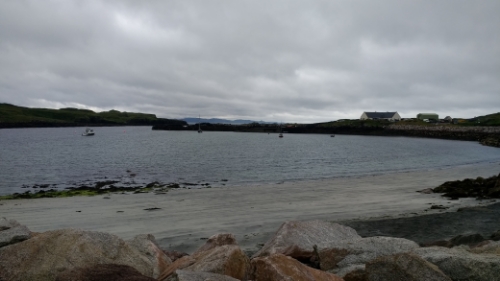 The Isle of Eigg is actually owned by the community and 2017 marks the 20th anniversary of the successfully buyout of the island. It is a very green island and is not connected to the mainland electricity supply. Since 2008 Eigg has been generating it's own power through wind turbines, solar farms and hydroelectric generators!

Only 5 minutes into my ride around the island and it had started to rain again. I had decided to take what I thought was an off-road route that would bring me out at Kildonan but after a while I checked the map again and realised that it wasn't possible and I was just in the middle of a field somewhere, this would be stupid moment number three then. I headed for the house in the distance as I figured there would be a gate and I could get back to the road. There was indeed but there was a slight obstacle in the way - a stile. 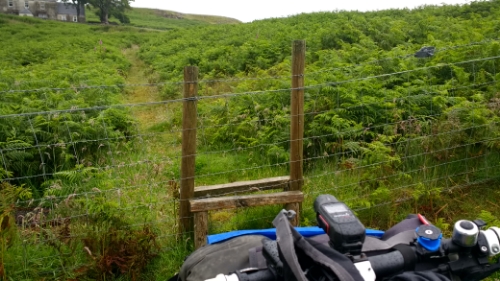 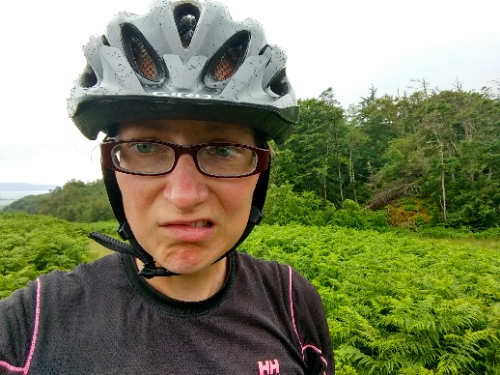 Not a fan of turning around and heading back the way I came in the rain there was no choice but to take the bags off the bike and try to haul it over. It was at this moment that the rain got heavier of course and even after taking the bags off the bike I was stuck with only the front wheel over the stile, oh joy! If anyone was watching me they would have thought I was crazy as I heaved, cursed and pushed the pedals and then finally the back wheel over the stile, boom, mission accomplished! I was exhausted and soaked and now had to put all of the bags back on the bike and hope that there were no more stiles up ahead. These things come in threes and so luckily I was fine and managed to get back to the road without encountering any more obstacles.

Riding north towards Laig Bay I saw a sign for a yurt cafe and thought that I'd stop for a nice cuppa. After getting a soaking pushing the bike through a narrow path surrounded by high bushes I found a house and asked a man there if I was in the right place as it didn't look much like a cafe. He said that I was and showed me into a rather shabby looking yurt which looked like it had seen better days. 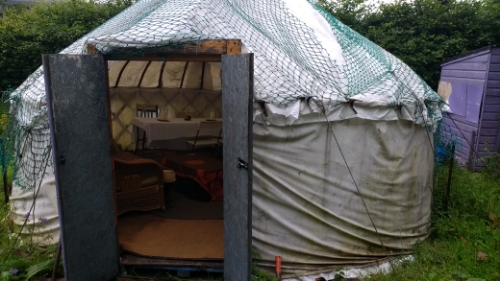 I ordered a pot of tea and sat swatting the midges that had descended. Both the man and woman came to chat to me and were nice and welcoming but to be honest it was a bit grotty and I was just trying to drink the tea quickly to get out of the midge-fest and back on the road. 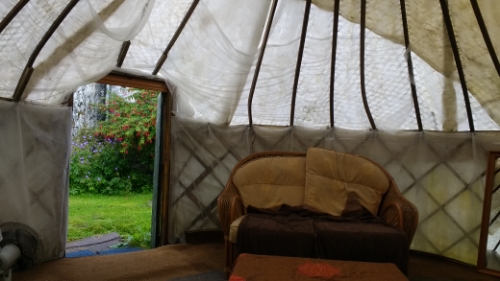 £1.50 lighter I rode out to Laig Bay which although the sun wasn't out still looked rather lovely. 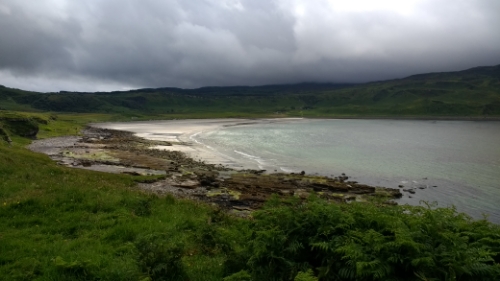 Leaving The Beast at the start of a rather rutted and muddy path I walked along the clifftop to see the Singing Sands beach. 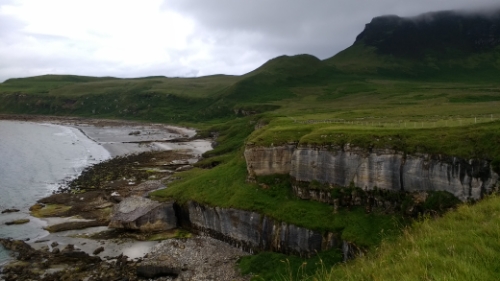 It was rather cold and starting to drizzle so I didn't go down to the beach to see if I could hear the sand sing and I'm glad because I think it only works on dry sand and there wasn't much of that about. The sand on the beach comes from the surrounding sandstone cliffs and is formed of pure quartz grains which are angular in shape. If you rub them together then they make a light sqweaking sound, which the victorians called singing.

I'd ridden most of the road on the island and so decided to head to the hostel and get sorted. An hour later I was squeaky clean having had a fantastic hot shower and since most of my clothes were in the wash I had my bikini on, my casual trousers and my down jacket - rather unconventional but better than smelling like a tramp. In the shower I found 4 ticks!!! 2 hiding snuggly behind my knee, 1 on my hip and 1 on my arm - pretty shocking really. It's so difficult to see them as they are so small.

The hostel was lovely, really big and well thought out and after meeting some of the other guests I sat happily chatting for most of the afternoon. It was wet outside and I was pleased that I wasn't camping as it would have been rather depressing and soggy.

The lady in the yurt cafe had told me earlier that there would be some entertainment in the local community cafe/bar tonight as there was a 3 day music festival on. Lauren, Amanda, Jenny and Sarah were also going down and so after dinner we headed out into the rain to walk down the hill to the pier. I didn't have waterproof trousers so it didn't take long for my trousers to be soaked but a kind islander had given us a lift half of the way and so it could have been a lot worse! Another glimpse of the ways of island living and generosity of people.

I have obviously taken my eye off the ball lately because I didn't know that Eigg had a brewery and so was super excited to see that they had 2 local ales on, a great way to start the night. It was packed in the bar but that meant lots of heat to dry off my clammy trousers and with a pint of the local pilsner and with locals playing celtic/folk music it was a fantastic atmosphere. 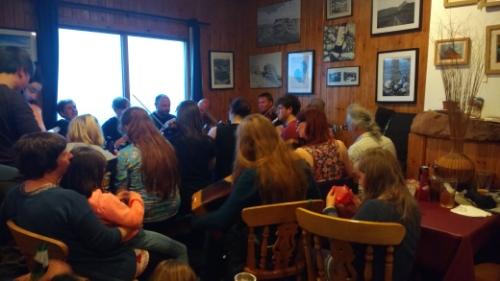 Turning up to something like this on my own would have been a totally different experience and I was really glad that there was a little group of us together to have a laugh with and enjoy the night. I got chatting to a girl called Alecia who had just arrived for a month from LA to do voluntary work on a croft which was cool and maybe planted a little seed in my mind for the future perhaps.

Trying the second local ale which was a pale ale I definitely started to feel the buzz of the beer. It wasn't just me, we all agreed that it was pretty potent stuff but with the music playing, laughter sounding and people smiling it was fantastic fun. Being part of a community I think is something that I'm definitely craving and the people here on Eigg have got it sussed! I know that I'm not cut out to live in such a small place but that feeling of wanting to belong, to help others and contribute to something worthwhile is very strong within me at the moment.

One final drink and Amanda, Jenny and I set off into the dark and misty rain to walk back to the hostel. This is the first time in the last 10 weeks that I have seen true darkness as it's usually light until midnight if not later here but the weather had set in and it was pretty darn dark. Thankfully Amanda and Jenny both had headtorches and after what seemed like an age we arrived back at the hostel, soggy and tired at 1am.

Today was really special. I love the feel of the island and the environmentally friendly attitude that they have here. I made new friends and had my first taste of Scottish fiddle-dee-dee music whilst drinking local beer - life is pretty good right now!