Waking to a misty drizzle in the bay I packed up and was on the road for 10am. Todays plan was to cycle the few miles to Portavadie, get the ferry over to Tarbet on Kintyre and then cycle to Claonaig Bay on the east side to get the ferry to Lochranza on the Isle of Arran.

Arriving at Portavadie I only had 20 minutes to wait for the ferry and had a quick snack and chatted with a few people, one of which was a keen cyclist and reeled off a list as long as my arm of routes he'd done and places he'd been.

It was only a 20 minute crossing so I arrived in Tarbert around 11:15am. 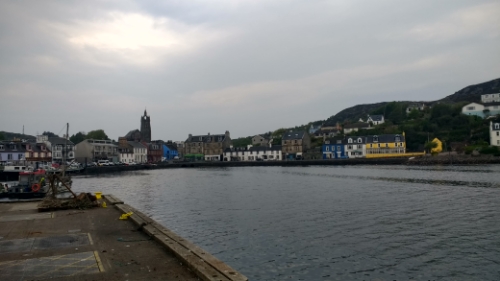 The ferry to Arran was at 12:35 or 13:50 and I really wanted to make the first one and so I set staight off for Claonaig Bay. It was mostly uphill to Kennacraig but I was making fairly good time and was hoping that when I turned off the main road that it would be a nice few miles of descent into the bay. I couldn't have been more wrong. Miles and miles of up and down and now that I was riding east I had a headwind to contend with too. My hopes of making the ferry were fading with every hill I met. The main reason I wanted to get the first ferry was because I knew that the Isle of Arran Distillery in Lochranza did a tour at 2pm. As each hill brought no view of the sea or the bay I was disheartened and started to get a bit angry. After a while I realised that I was being a total arse, I had no time limits so why was I making myself moody just to get a ferry. Shouting aloud at myself I said, 'this is what you came for - Scotland, the hills, so get over it!'. That was it, this was now a challenge, a race against time and not the signs of impending doom. I told The Beast that we were going to make it and as the cars bound for the ferry came and overtook us I kept going and we worked as a team. It was around 12:15 and we had 20 minutes to go when we crested a hill and saw sea, woop! No resting now though we still had a few more hills to go and then the bus overtook us and the buses always run in time with the ferry so now it was seriously pedal to the metal, calves and thighs screaming, teeth gritted and muscles burning. A sign, a ferry sign, go go go and come to a standstill at the terminal. Gasping for breath and hanging over my handlebars I grinned and patted The Beast well done, we'd made it with 10 minutes to spare and all was well with the world again. Now, important things, time for a celebratory Snickers. 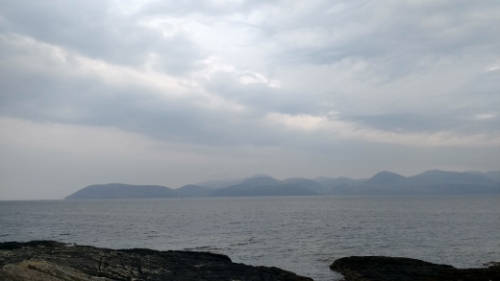 I think the crossing to Lochranza was my favourite yet just for the pure effort put in to get there. Again it was a short 20 minute ferry and I arrived at the distillery just in time to treat myself to a bagel for lunch in the cafe before the tour. 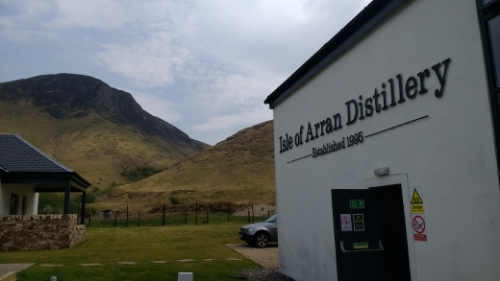 I really have no idea how whisky is made and so this was very exciting, my first foray into the world of Scottish whisky. Our guide was Gerard whom coincidentally I'd met outside as I was locking my bike up and he been a keen mountain biker was asking about the setup and my bags. After a little introduction and a wee dram of the Isle of Arran 14 year old single malt to taste we watched a video about the history of the distillery. Arran is a very small distillery and very young at only 21 years old and unlike the other distilleries in the Scottish Islands, it doesn't focus on making the peaty, smoky whiskies. Now I am not a whisky buff at all so I won't even try to explain what it tasted like but I did enjoy it and it left me with a rosy glow inside. Next I learned that whisky is actually made from beer! Crazy, I never knew it but the first thing they do is to make a beer and then basically put it in a copper still to boil off the alcohol which is the pure spirit of whisky. 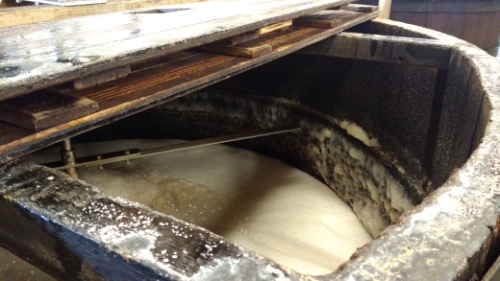 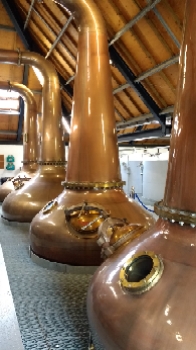 Once this reaches a certain purity it is then put into various different casks, bourbon, sherry etc. and left to mature. In order to be classed as a Scotch whisky it must be made in Scotland and be matured for at least 3 years.

We then moved into the bar where Gerard told us a bit about the different whiskys that the distillery produces. We had a taste of the Isle of Arran Gold which is a whisky cream liquer made with Isle of Arran single malt and Irish cream, absolutely heavenly!

Tour over and I came outside to bright sunshine. My previous thoughts of settling in the Lochranza campsite for a shower and early night went straight out of the window as I mounted The Beast ready to ride around the west side of the island.

As always the coastal road was beautiful and after a while I came across a little shop with lots of bikes outside of it, time for a wee break. Only one thing could satisfy my appetite, ice cream! Walking over to the other bikers I was warmly greeted and bombarded with questions of my bike and travels, I love it. Chatting to an older couple from the Lake District I got carried away until another lady said, 'let the girl eat her ice cream before it melts', and they were away on their travels and waving goodbye to leave me with the sea view and an empty bench. 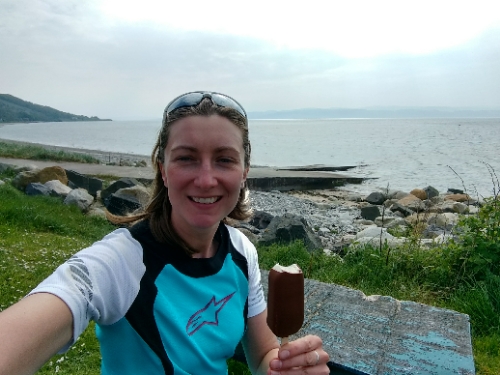 Continuing down the coast I was starting to think about where to sleep for the night when I came across a sign for the Kings Caves. It was a 3 mile loop going all the way down to the beach to the caves and I figured it was worth a shot if not just to see the caves. The ride was gravel and rocks most of the way until a steep narrow descent took you through a gate to the beach. Leaving my bike at the top I went down to scope it out and found a perfect spot just at the bottom, a little perch of grass overlooking the rocks and the sea. My room for the night thank you! 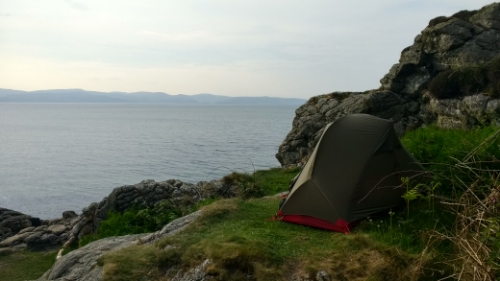 After setting up the tent I was heading to the caves when I saw a couple walking towards me. The usual hello turned into a 20 minute conversation which I most thoroughly enjoyed. I may keep saying it on this trip but the people you meet along the way really do make a difference to your day. A smile, a laugh, hearing about their life and sharing your story is actually the best thing about this trip. The human element. Saying my goodbyes I visited the caves, which have been used for ceremonies and rituals for nearly 2000 years and may even be linked to Robert the Bruce's visit to Arran in 1307. 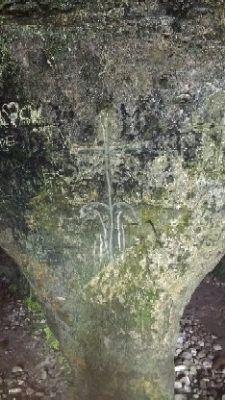 I wandered back to my tent and enjoyed the view for a while. I'm certainly learning the ability to just enjoy and be in the moment on this trip. 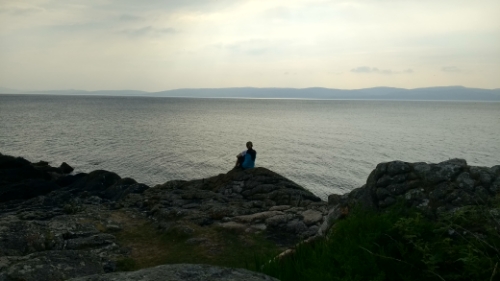 Not long after the rain started and didn't stop until the early hours. My first real rain so far after 11 days, I really can't complain and at least I was tucked up in my tent ready for the night. Sweet dreams.