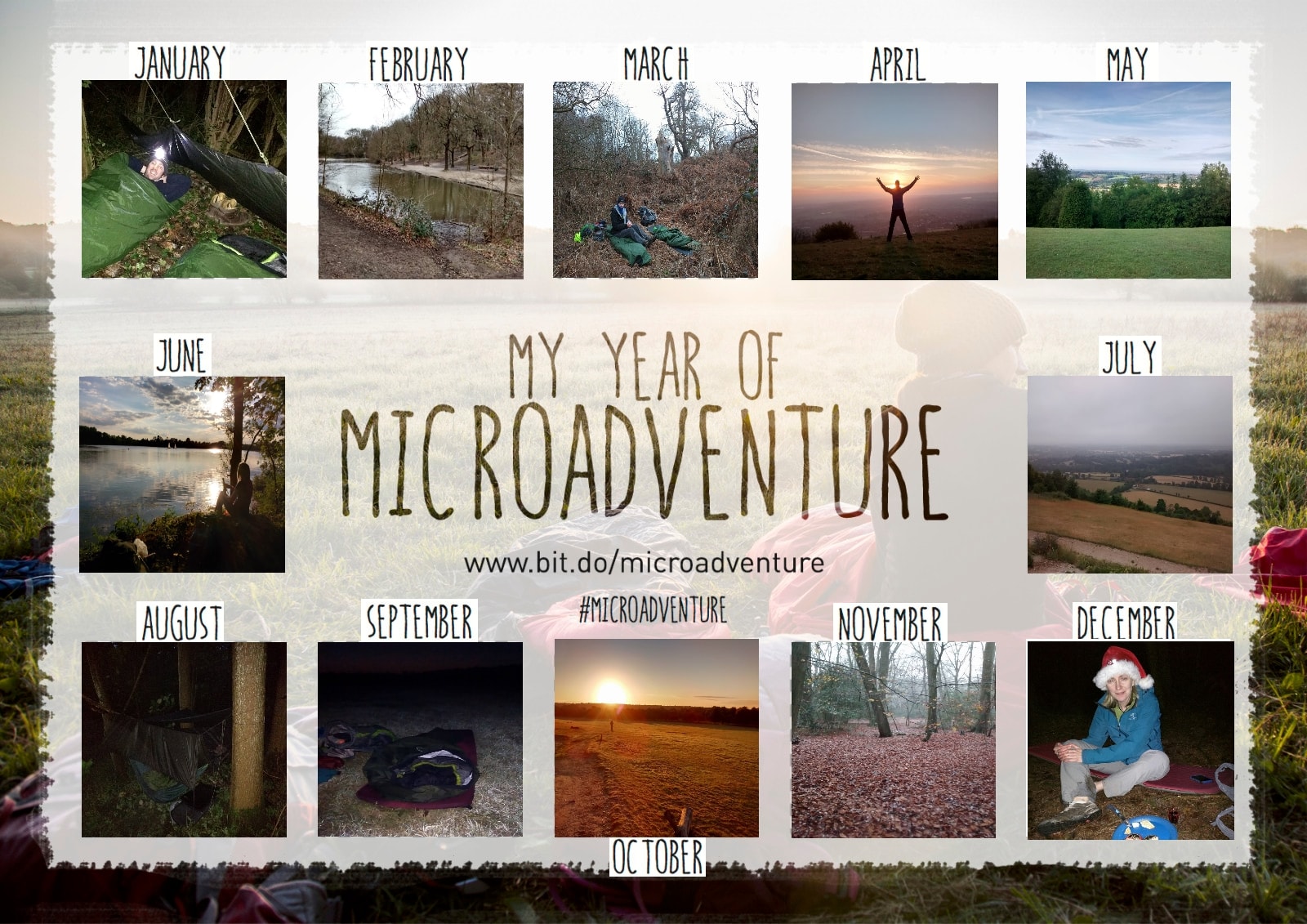 In December last year my friend Tim and I were having a Christmas drink and after a few beers and a festive port we had challenged ourselves to take part in Alastair Humphreys Year of Microadventure for 2015.

12 months later I can happily say that we did indeed achieve a year of microadventures! One night every month, sometimes well planned, often rushed and mostly involving a pub visit (for food obviously) but more importantly a night under the stars/rain/wind/snow to enjoy nature....

Here's a quick review of our year of microadventures:

January - Smugglers Pit Plantation, Mugswell
Walked from Carshalton, pit stop at Well House Inn and a cold, damp night in the woods by a golf course. So many clothes on I struggled to fit into my bivvy bag.

February - Queensmere Pond, Wimbledon Common
Drinks in the Rose & Crown in Wimbledon Village before managing to get lost on the Common looking for Queensmere Pond. A nice dry night followed by a very cold breakfast and brew by the pond in the morning.

March - Ashtead Common
Walked from Epsom Common via The Shy Horse in Leatherhead to Ashtead Common. Comfy bracken to sleep on but I found an unwelcome visitor attached to my leg the next day (tick) - yuk!

April - Butts Brow, Willingdon
Late start to the evening so beer, pork scratchings and ration packs eaten on Butts Brow. Quite exposed bivvy but had a fantastic view of the Lyrid meteor shower and watched the sunrise over Eastbourne in the morning.

May - Caterham Viewpoint
Good few pints in The Harrow pub before wandering along the North Downs Way to Caterham Viewpoint. I ripped my trousers trying to hop over a barbed wire fence. Lovely view for breakfast and a nice wander back to the car along lanes full of wild garlic.

June - Wraysbury
Beautiful evening walk around Wraysbury and the Silver Wing Sailing Club with a sneaky pint in The George before finding a nice perch by the lake to sleep. Went for my first wild swim/plodge in Colne Brook in the morning, rather nippy but refreshing!

July - Guildford to Box Hill
An early finish from work to walk 14.8 miles from Guildford along the North Downs Way to bivvy up on Box Hill.

August - Titsey
Wet, so a few too many beers at Botley Hill Farmhouse before wandering into Titsey woods and spending an hour in the rain trying to setup a hammock for the first time.

October - Richmond Park
Settled under trees with the gleaming eyes of the deer about 10 metres away for a dry, albeit noisy (rutting season) night. Beautiful misty, frosty morning.

November - Epping Forest
Beers in The Last Post and The Victoria Tavern followed by a rather nippy night in the woods. Woke up to the first snow of the year!!

December - Crockham Hill Common, Kent
The festive finale - beer in The Oxted Inn and a very muddy walk to Crockham Hill Common. Prosecco for starters and Tim cooked turkey cous cous, followed by cheese and crackers and port, a celebration of the end of our year of microadventures!

It sounds easy to say, 'yeah let's bivvy once a month' but with our ever hectic lives and commitments it was harder than I thought. A couple of times I thought to myself, 'uh, I can't be bothered to do this....let's just get this months microadventure done and out of the way' but then other times I'd be counting the days until I could get out there and sleep under the stars (or tarp).

My microadventure highlight of the year has to be watching the Lyrid meteor shower and then the sunrise over Eastbourne in April. The only way I can describe it is that I felt alive. I felt like I was taking the time to appreciate the world rather than just existing within it......in my eyes that's the true beauty of a microadventure!

A map of our 2015 microadventures: