Today I caught up with my good friend Nicola Papalini who at the weekend took part in his first Ultra Tour du Mont-Blanc (UTMB) race. Nicola, an Ironman and ultra runner completed the 171km (106 mile) extreme mountain race with over 10,000 metres of elevation gain in a remarkable 41 hours, a whole 5 and a half hours ahead of the race cut-off time. Together with 2,300 other runners who started in Chamonix on Friday evening he battled the difficult weather conditions with sun, snow, sleet, wind and temperatures of -9 degrees celcius to become part of a unique group of people who can call themselves UTMB finishers. 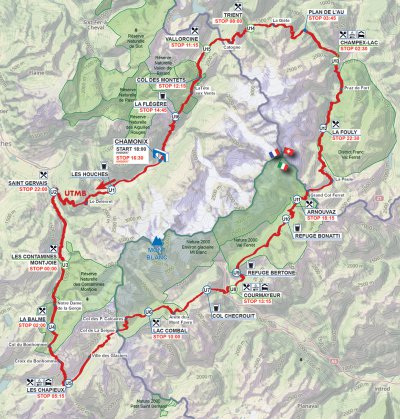 I asked him a few questions about his experience.

Firstly, a huge congratulations to you Nicola! How does it feel having completed your first UTMB?
I don't think it's sunk in yet. Over the last few years I've watched clips of the race on YouTube and read about it in Scott Jurek, Kilian Jornet and Marco Olmo's books. I've fantasised about it and I used to think, 'imagine if you finish, actually finish UTMB...' and now that I've done it I can't quite process it. It's a mixture of happiness, satisfaction and incredulity that still hasn't settled into a definitive feeling.

What did it feel like lining up alongside 2000 other runners waiting for the start?
Well, I left it to 15 minutes before the start to get in line because I didn't want to be standing around for ages beforehand, but I couldn't find my way to join the other runners and so ended up jumping over one of the barriers to get in. One of the marshalls was giving me funny looks and came over to question me. It turns out I was alongside the elite runners and so I had to get out and find the rest of the runners at which point I was right at the back of everyone! It was amazing though, the intensity of the crowd cheering and clapping together with the music that was playing - it was a bit emotional to be honest.

There's an essential and recommended kit list for UTMB but this was your first time - what kit did you start out with?
The race started at 18:30 so I had on shorts, compression socks, a thin long sleeved thermal top and a t-shirt on top of that. In my bag I carried a thicker thermal top and a windbreaker. In hindsight this was my biggest mistake as I was ok until about 1am but by then I was soaked and really needed some warm, dry clothes to change into which I didn't have. 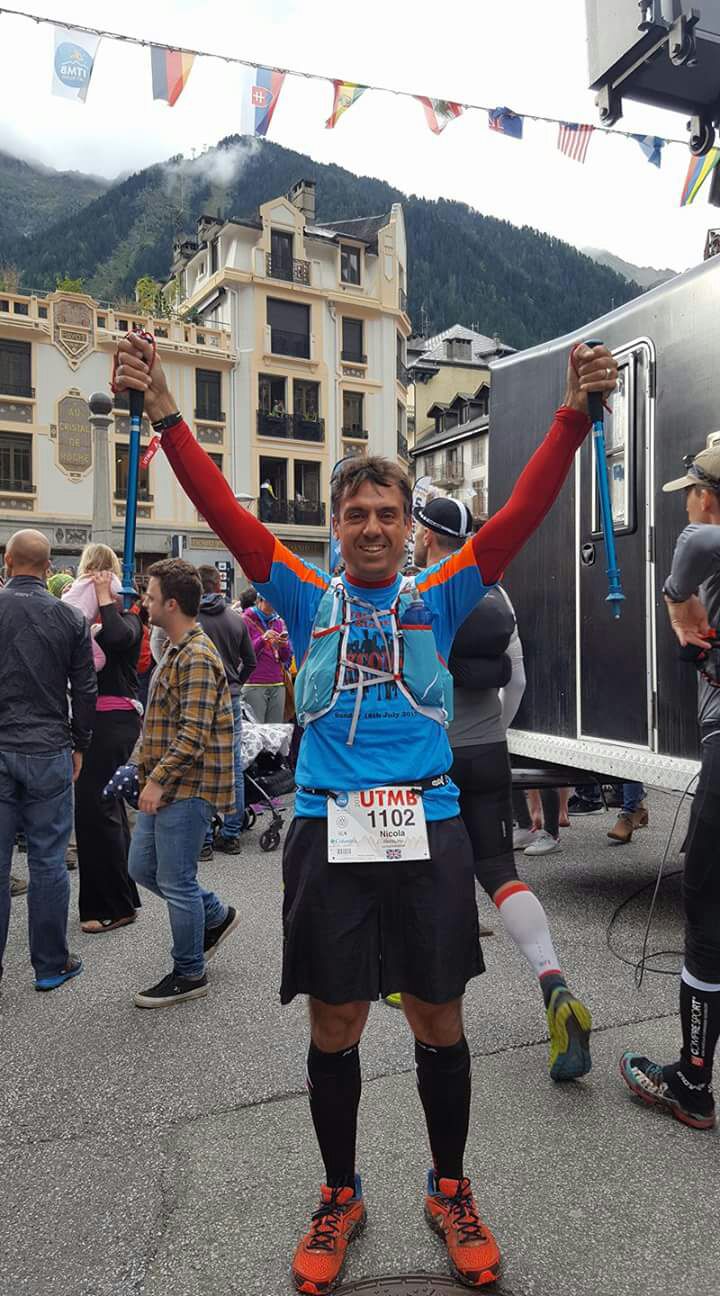 I can imagine there must have been some pretty hairy moments along the way, what would you say was your scariest moment?
It was definitely the snowstorm during the night. Climbing up steep mountains and not being able to see anything other than the snow in your headlight and maybe the feet of the person in front was pretty frightening. In the mountains my watch was reading -11 degrees and I could see people stopping and lying down out of exhaustion. That is the last thing you want to do in those conditions and you feel compelled to stop and try to help them, but by doing that you put yourself at risk as well. I did stop to help one guy but one of the other runners told me that I really shouldn't stop and thankfully he pointed out the lights of the help coming down the mountain from above to the aid of the guy. You never quite realise just how dangerous it can be until you're in the situation and how close to hypothermia you can get in these situations.

It sounds pretty intense, luckily there were others around you, how did you find this race in regards to the other runners?
It was a bit different to the other races I've done in the past. In the races that gave me points towards UTMB qualification, the North Downs Way 50, the South Downs Way 100 and the Isle of Wight Challenge the atmosphere amongst runners was very chatty but in UTMB it was a bit more serious. A lot of it is singletrack and you're all in a long line on both the ascent and descents and so there isn't as much opportunity to run with others and talk. Also everyone was very focused on their own race which is understandable. At one point I was coming up to a feeding station and was absolutely soaked and freezing and the next feeding station was up another ascent. I was wearing shorts and a windbreaker as that was all I had but had no idea how I was going to keep going with so little clothing in the crazy temperatures. The guy in front of me handed in his number and dropped out of the race. I asked him if he would help me out and lend me some clothes and he looked at me and said, 'you're wearing shorts??!!!' and then took off his waterproof trousers telling me that they were rather sweaty but I didn't care. He also gave me a top and would have given me the rest of his kit if it had been dry. It was really kind of him and I wouldn't have been able to continue without it.

Wow, that was pretty lucky! So what food and drink kept you going throughout the race?
At the feeding stations I always had soup to warm me up. It was pretty horrible as I put teaspoons of salt in it. I was sweating a lot so it was important to keep my salt levels up. They had this amazing cake there so I would take a few slices and then put them in my cup with tea and sugar and eat it with a spoon. At one of the feeding stations I had pasta with cheese and at others I ate cheese or ham. I only had two gels throughout the entire race, it was mostly real food. I also saw another guy putting tea into his bottle to take out with him which I hadn't thought of so quickly started doing that to have a nice hot drink through the night. I had started out drinking coffee but it sent me a bit mad so I moved onto tea instead.

How did your body cope during the race, did you have any problems?
It was fine, I had no stomach issues which happens to a lot of people in these long races. I just ached. I think it's more of a mental effort than a physical one. If you have the right frame of mind then you can keep your body going regardless of what hurts. I'm used to my toenails falling off after a race so I suppose the only thing was that a few hours after the race my right ankle ballooned up, so I'm hobbling around a bit now. 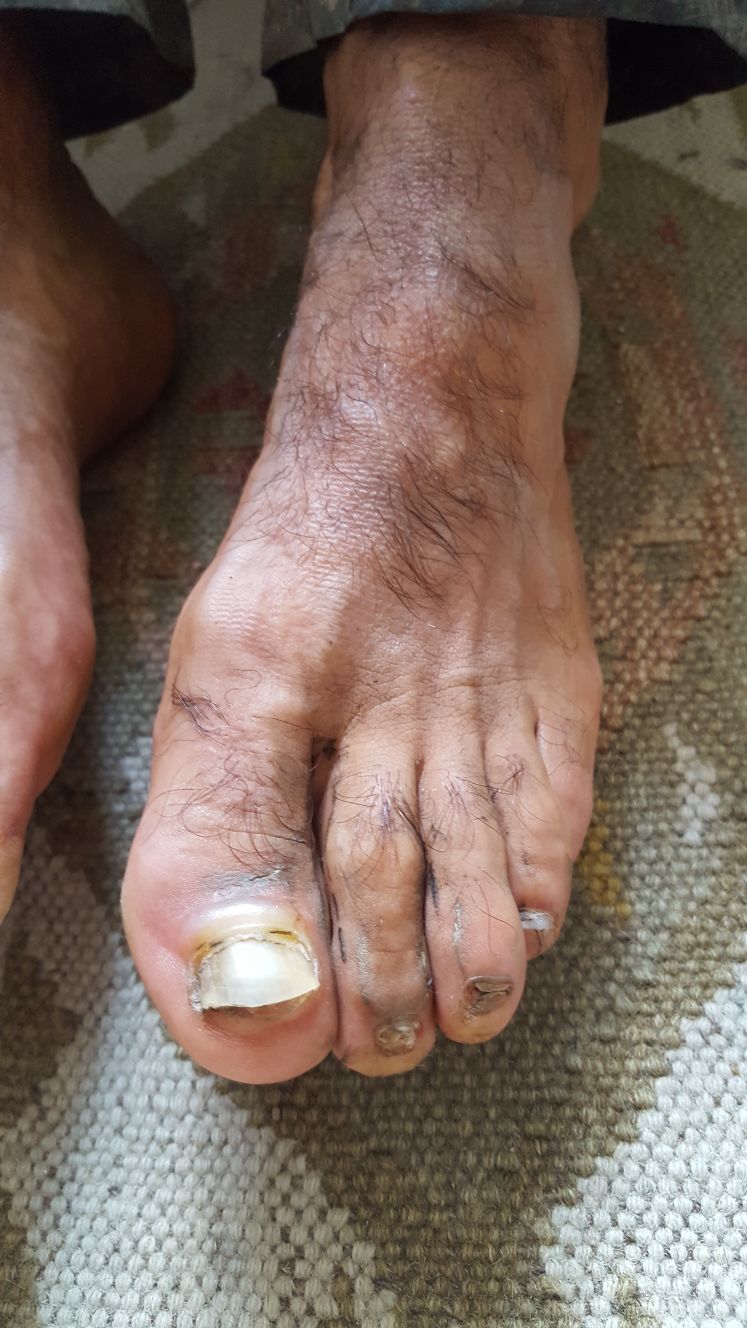 Did you ever want to quit? If so then how did you deal with it and keep going?
I wanted to quit loads of times. I just knew that I was about 4 or 5 hours ahead of the cut-off time so I knew that I could just sit down and take some time out and give myself the chance to think about it. At the feeding stations I just played a game with myself where I would always leave by the cut-off time for the next feeding station so I was giving myself plenty of time to get over wanting to quit. It worked for me!

You've taken part in many ultra marathons but this was your first UTMB. What words of advice would you give people who are going to run UTMB for the first time?
This race is impossible to do without a support crew! It's not compulsory in the rules and it was only by chance that my friend Wesley who lives in France came to crew for me but I wouldn't have finished if it wasn't for him. You are only allowed one drop bag in the race and there's no way you can carry enough dry clothes during the race so you need a crew for a clothes change. I had nowhere near enough dry kit with me, really you need them at every feeding station. I was soaked with rain and sweat and then stopping at the feeding stations I'd be just wet and cold which wasn't good. You need a full change of kit including shoes, shorts, tops and gloves really. Wesley even gave me his socks and his snow jacket to wear - he ended up driving home in boots without socks and a t-shirt in -5 degrees! 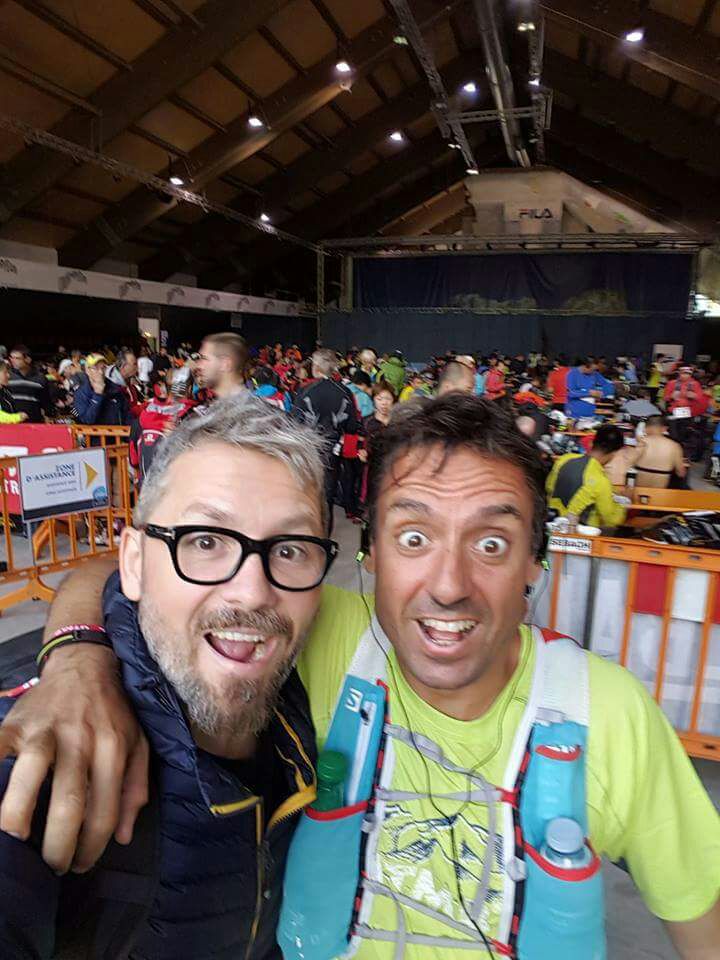 So what was your most memorable moment of the race?
Ah, there were a couple. At one point I'd just come out of a storm and was at 2,500 metres and the sun was rising. I was above the clouds and I could see bits of the valley appearing and the villages. I felt so energised, I was running down the mountain and was just absolutely loving it. The other was on the Saturday night at one of the feeding stations. It was like a cave in the rockface, it could have been a mine or something. There was a whole line of tables in there with food and then when I came out there were about ten campfires and there was music and the runners were warming their hands and people were dancing. I just thought that it was crazy. I'm in the middle of a race and there's a party going on here, it was so surreal! 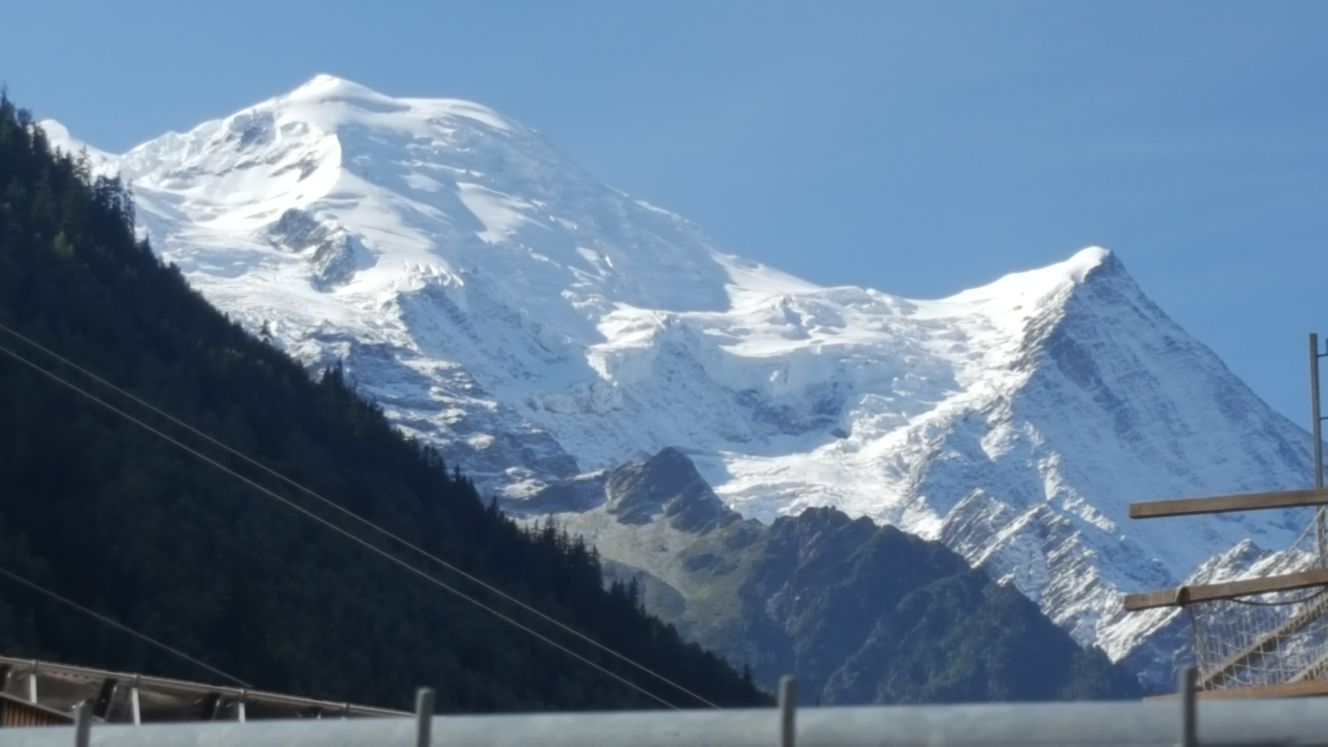 So, the million dollar question Nicola, would you do it again?
Yesterday I would have said definitely no. Today though I've had time to think and it's like if I did it again I would know what to expect and so could have the right kit etc. Also I was 5 hours off the cut-off time so I'm thinking that with the lessons learned this time I could surely knock another 4 or 5 hours off my finish time. 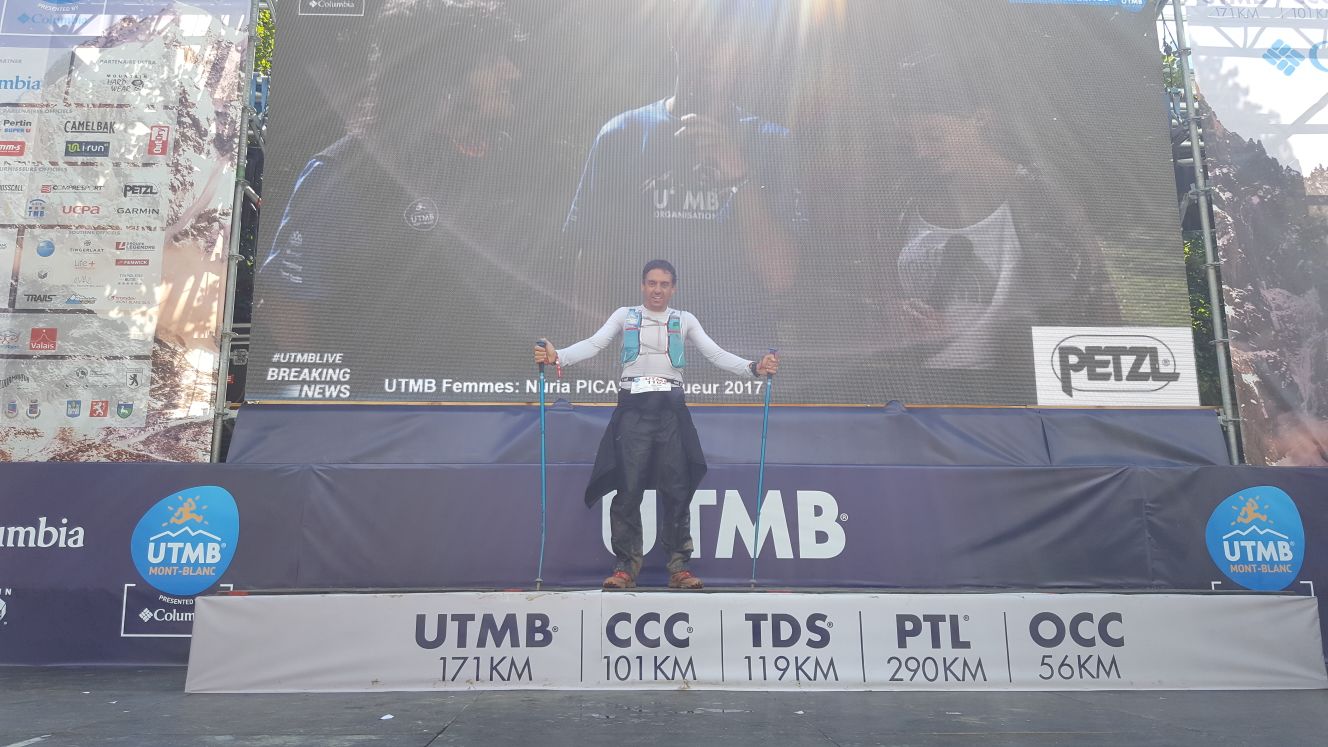 What's the next race for you then? Any plans?
Nothing! I need to rest and see how my ankle is.

Knowing Nicola as I do I'm guessing that means watch this space as he's definitely not one for sitting around. I've known him say this before and then within a week he's entered another crazy event with only a month or so for training, haha! I look forward to seeing what is next for him.