It feels strange to be on the Isle of Skye and not having had to take a ferry to get here. Only a few miles down the road from where I stayed last night is the Kyle of Localsh and from there you can ride across the bridge and onto Skye which is what I did first thing this morning.

I woke early and was riding by 9am. It was overcast and had rained during the night but wasn't cold so I was happy enough. The first few miles up and over the bridge were nice and scenic along the coast. 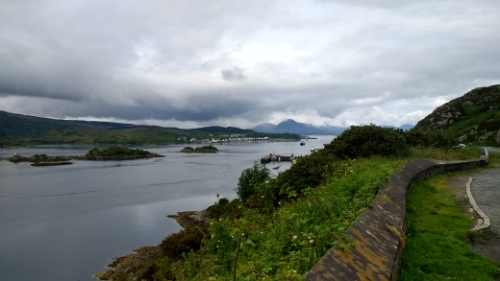 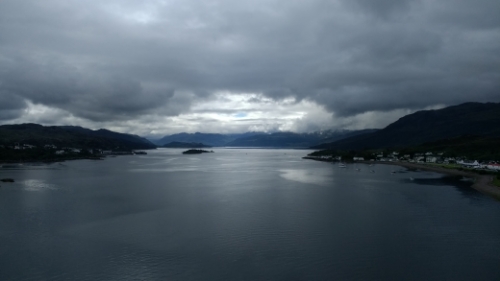 From then on it was just miles and miles of boring tarmac without any particularly nice views. Tree lined road and a busy road at that. I'm honestly really surprised that I made it to the end of my ride today because the drivers today were the worst I've encountered in the last 8 weeks! Whenever I've spoken to other people about Skye they have always told me that it's super busy and today I experienced it first hand. Single carriageways with no passing bays and drivers who are too busy to wait for enough space to pass have been the bane of my life today. At least 3 times they came close enough for me to touch them with my elbow. One guy came so close that when he overtook me and then stopped at a junction I rode up to the passenger side window and told him in no uncertain terms what I thought of his driving. He looked at me with absolutely no emotion whatsoever and then drove off - knobhead! (sorry, but he was).

I stopped in Broadford early morning for a cuppa and from there it was another 25 miles to Portree where I was hoping to get a room in the youth hostel for tonight. I felt a bit lethargic today, not really in my legs but just in general. The last 2 days riding has been rather intense and I'm feeling it. The scenery improved a bit the further north I went which helped my mood and made the riding more enjoyable. 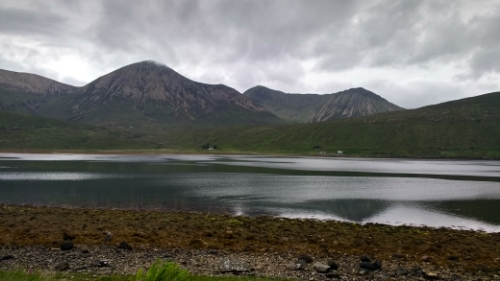 By the time I saw a sign for the Slighachan Hotel in 3 miles I really was only thinking about stopping and having a break. I'd been eating all morning but my stomach wanted food again and it was only just noon. Those 3 miles seemed to go on forever and I was really glad to roll into the car park and sit down. I decided that the budget today was out of the window as I ordered a black pudding, goats cheese and red onion marmalade panini and a pot of tea - food always helps in these situations I feel.

An hour later and I was full but still feeling tired. Only 9 miles to Portree as I left behind the gateway to the Cuillins. 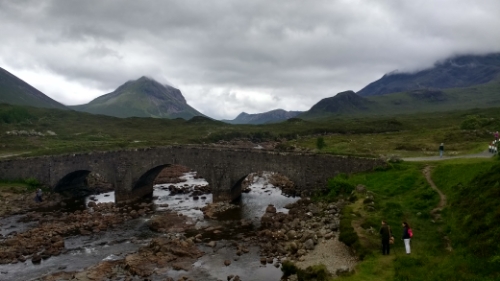 Those 9 miles were ridden on auto pilot with minimum effort. Just turning the pedals and looking a metre out from the front tyre and ignoring the whizzing cars overtaking me. I could see the town about 4 miles out and I could also see and feel the spitting rain threatening to make my day worse. I had made good time to be honest but I hadn't particularly enjoyed the cycling.

Arriving at the youth hostel I found that the reception wasn't open yet and there was no one around so I sat in the lounge and waited. The rain started and I just kept my fingers crossed that they would have space for me. I'd arranged a red cross parcel to be delivered here from my Mam with some shorts, ration packs and other bits and it seemed that they'd tried to deliver it earlier as there was a red Royal Mail card at reception for me saying that it had been returned to the depot. Hopefully I can collect it tomorrow.

It wasn't long before someone arrived at reception and I was so relieved to hear that there was a bed for me, however at £27 it is the most expensive one I've had yet! All thoughts of staying for another night were out of the window and I showered and did my washing before chilling out on my bed.

I've only ventured out to buy some dinner and have continued to ignore my budget and indulged in a vegetable pizza, some salad and a nice bottle of pinot grigio! Now to sit in a comfortable chair and cabbage for the rest of the night 😁.