What a long night. After another lazy rest day hanging around the bothy yesterday we had to leave but pitched the tents just up from the cliffs. The wind was relentless last night and the flapping of the tent was so noisy that it was very difficult to sleep. I looked at my watch at 1, 3, 4, 5 and then was just in the middle of a dream when Ben shouted to wake me up at 7. Urgh, I did not want to get up!

We had many miles to ride today and due to the wind we had opted for an early start in order to try and make it to Stornoway in good time to get a bed in the hostel there. Fuelled up on porridge and tea we were on our way by 8:45am thanks to a very helpful sign. 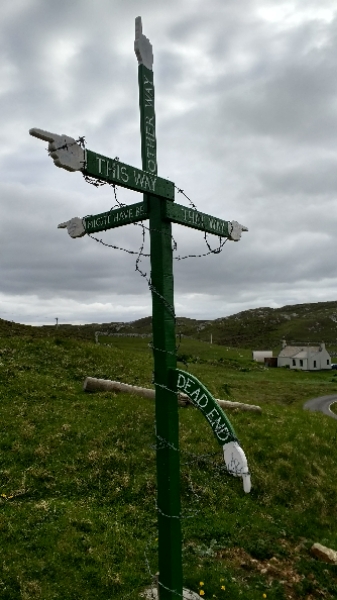 We were riding the same road that we came down a few days ago and we knew that there were a fair few hills before our first port of call at the shop in Timsgarry where we could grab some supplies for the day. I was feeling pretty good, I think that a day of doing absolutely nothing yesterday was really good for my legs to recover from the massive 51 miles on Wednesday to reach the bothy at Mangersta. Since meeting Ben at the hostel on Sunday I'd had 2 rest days and really enjoyed a change of pace and routine in some really lovely places. It was part of what I'd set out to do on the trip but sometimes it's harder to do these things by yourself as you strangely feel guilty about not riding. It's so much easier to give yourself a day off if someone else agrees with it.

The riding was going well and we were making good progress with the odd pit stop to feed our ever hungry stomachs. 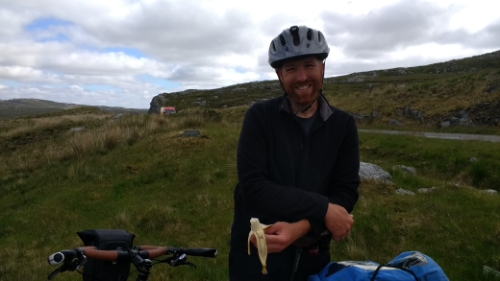 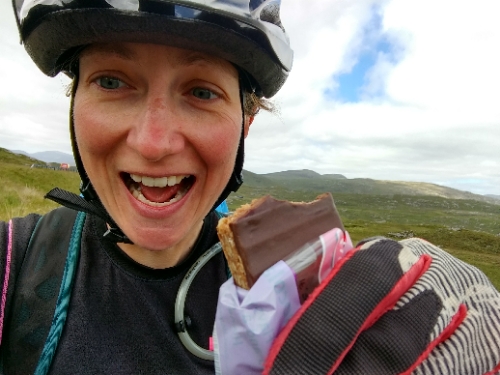 By lunchtime the sun had come out and it was blue skies and that is always a good thing. The wind was still there but the sun giving you the feel good factor is not to be sniffed at. Taking the singletrack road across the moors and off the busy main road was a nice change. The roads had been very busy this morning and with the wind so loud you can't hear cars or trucks approaching behind you and so when they zoom past on fast roads, some rather too close for comfort it's not particularly nice.

I was starting to struggle those last 5 miles or so. Knowing we were close and wanting so much just to get to Stornoway and out of the neverending noise of the wind I got myself into a bit of a funk. I think I just get frustrated at myself for feeling a bit miserable but luckily it didn't last long. Nearing the end of the singletrack road and hitting populated streets was beyond bizarre, with roundabouts and streetlights, things I hadn't seen for a long time in the small one shop towns of the Outer Hebrides islands. Riding towards the town centre there were lots of people and traffic and buses and everything you'd expect from a town but Ben and I looked at each other as if we were wary of the change of pace. If I thought this was bad how on earth would I ever go back to London!!!

Finding the hostel had room for the night was a nice relief and the shower here was the best one I've used for the whole trip. It was a real power shower and blasted away the days of muck and sweat. Most of the hostels I'd previously stayed in have old showers that are either set to low to save water or are not more than a dribble. This one was amazing! I put everything that I wasn't wearing in the washing machine and was glad to get things clean again - no more smelly socks, yay.

Heading out to the nearest cafe/bar we congratulated ourselves on a good days ride in the best way possible, a nice pint! Ah it tasted so good. 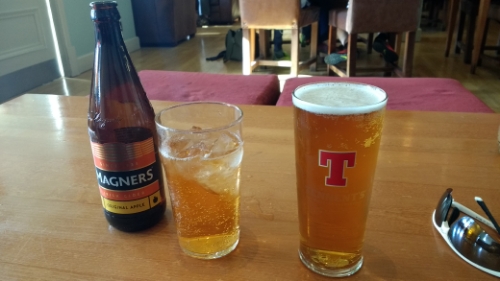 In for a penny, in for a pound and the daily budget out of the window we both demolished a burger and vegetables. Wonderful, tasty vegetables, green and full of goodness. Most things I eat on this trip are beige - porridge, pasta, bread, oatcakes, the list of beige fuel foods is endless. So juicy meat and tasty greens was a delight on the palate and with a second beer to wash it down we both sat stuffed and beaming.

We took a wander up to Lews Castle to try and digest a bit. The castle was lovely, very well looked after and obviously used for guests and dining. Rather a nice change from finding a few ruins from what the maps indicate as a castle. 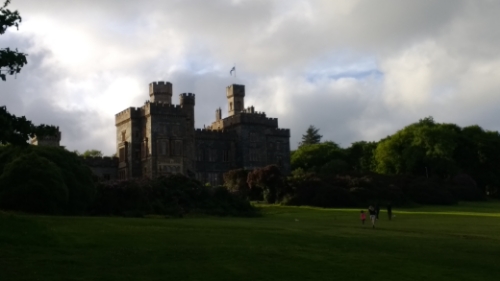 Plus there were nice views overlooking Stornoway in the evening sunshine. 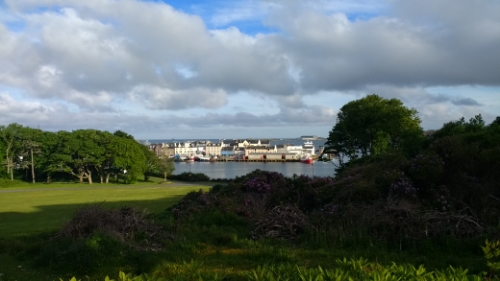 A very productive day and our last one riding together. Tomorrow Ben is off to Ullapool to finish his journey to John O Groats and I'm heading north to the Butt of Lewis, the most northern point of the Outer Hebrides and the end of the Hebridean Way cycle route.