I hadn't heard of The Smoke Ring before my mate Barry suggested it for our 3 day bikepacking trip. It's a 200 mile anti-clockwise, orbital route around London that goes through Hertfordshire, Buckinghamshire, Berkshire, Surrey, Kent and Essex. 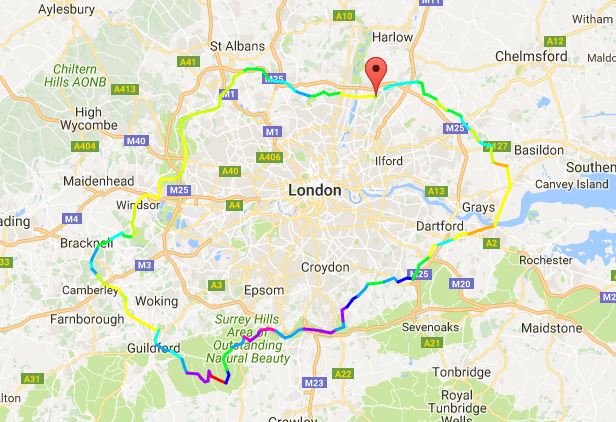 The plan was to have a nice leisurely trip and do a section from Windsor to Dorking which is mostly off-road and includes Swinley Forest Trail Centre and The Surrey Hills.

Saturday morning I set off for The Waterside Cafe in Little Venice, Paddington to meet Barry. I arrived a little early and parked the bike up alongside the canal to watch the world go by. 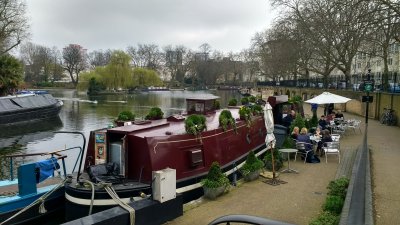 A canal boat came alongside to fill up with water and I ended up having a lovely chat with the heavily pregnant lady on-board who it turns out was leaving London that day to head back up north in time to have her first baby. My laden bike seemed to attract a fair bit of attention from the passers by and a lady asked me about my bike and where I was going before explaining that her daughter had cycled from London to Greece last year to go to a wedding! 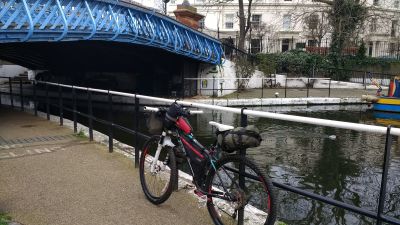 It couldn't have been a better start to the trip. London can often seem a rather unfriendly and solitary place and part of what appeals to me about riding is the people you meet along the way - and I hadn't even set off yet.

Barry arrived not long after 10am and after a quick coffee and tea from the cafe we set off along the Grand Union Canal. The canal would take us all the way to the outskirts of Slough and we soon settled into a nice riding rhythm along the towpath. All of my bikepacking trips up to this point have been on my own so it was exciting to have someone to ride with, plus Barry had the route on his Garmin so I would be map-free and happy to follow his lead for 3 days. A trip where I don't ever get lost - this will be a first! 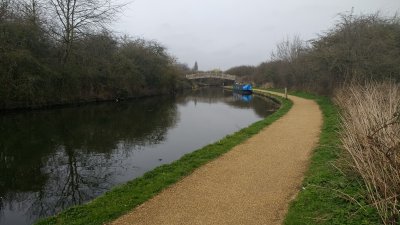 As lunchtime loomed we approached the M25 underpass. Riding beneath the roar of the motorway that encompasses London we shouted our goodbyes and left behind the mayhem of the city to embrace the fresh air of the great British countryside. Quite fittingly we then hit our first patch of muddy towpath and Barry ended up stopping to unclog his wheels of the clay based slop - a bit more clearance between your fat tyres and bike frame is sometimes useful, haha!

After our first picnic lunch of the trip we left the canal and skirted around Slough before riding through the picturesque historical town of Eton and over the Thames at Windsor. 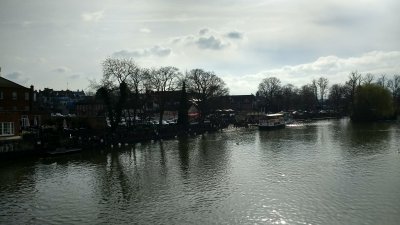 It was here alongside the river that Barry found his avenue! 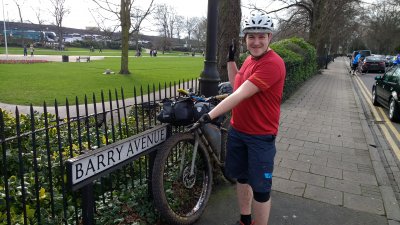 From here we rode into the greenery of Windsor Great Park and had a short break. This trip was intentionally about relaxing and enjoying the sights with achievable daily distances and it was a welcome change of pace for me. Back on the roads through Ascot we weren't far from our intended camp spot for the night so we popped into a shop to grab a few beers. There was a pub across from the shop and we needed to top up on water for cooking so instead of buying bottled water we decided to ask at the pub. It would have been rude not to have a sneaky pint whilst we were there! 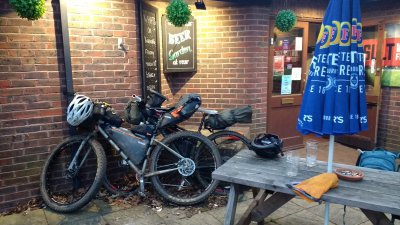 As dusk approached we got back on our trusty steeds and headed towards Swinley Forest. Riding the trails without lights certainly focuses the mind and it was a good challenge with a fully loaded bike. It wasn't long before we'd settled on a place for the night and setup camp hoping that we were far enough from the trail not to be noticed.

After cooking and eating dinner we chatted in the moonlight. I'm a bit of a scaredy cat when it comes to the dark so it was really nice to have some company but it wasn't long before I flaked out and said goodnight to Barry to spend my first night in my new MSR Hubba NX tent.

7am the next morning after a rather sleepless night I emerged to see our camp in daylight. Nothing beats waking up in a peaceful forest. 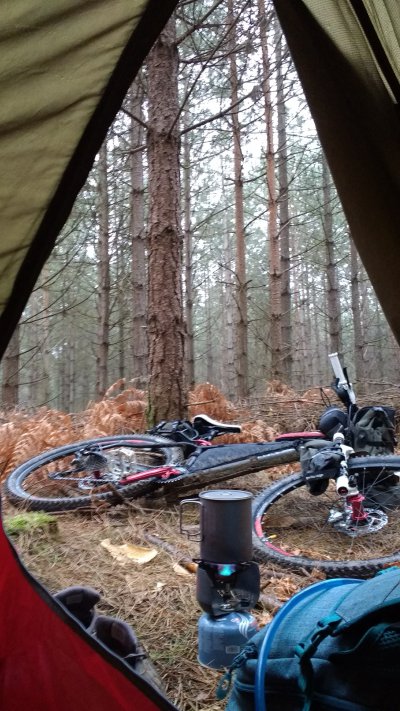 It wasn't long before I realised just how close we were to the trail when I was greeted by 2 riders just as I was about to drop my trousers! Luckily I saw them first and waved a cheery hand and a 'good morning' - needless to say I did my business rather quickly after that.

As we were packing up camp it started to rain but it wasn't going to stop us hitting the trails. I always forget how much fun it is to ride off-road, especially haring around the sweeping turns and downhills. Following Barry's lead we headed down a red route and the adrenaline was flowing as much as the rain at that point. My waterproof socks were waterlogged and squelching and we were pretty nicely covered in mud - but happy! 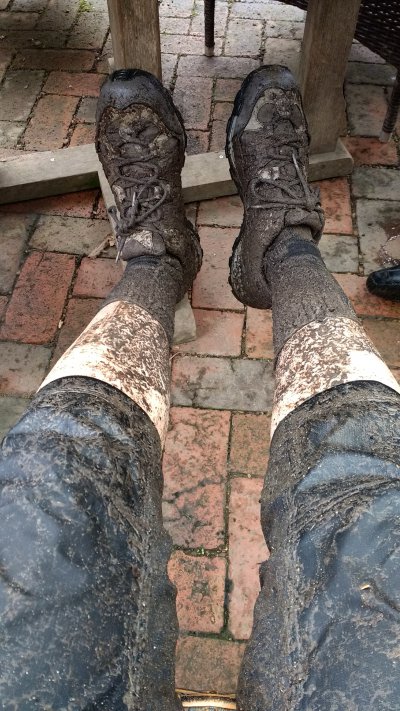 After leaving Swinley we headed through Lightwater and Bisley towards Guildford. The rain was pretty relentless and everything was covered in gritty sandy mud. Luckily it wasn't particularly cold but in need of some shelter we made a pit stop in Worplesdon at The Jolly Farmer for a bit of drying out and some refreshments. 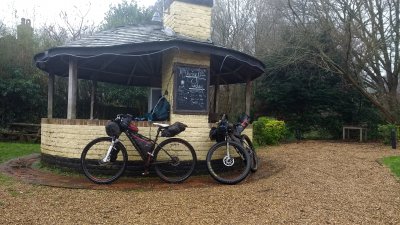 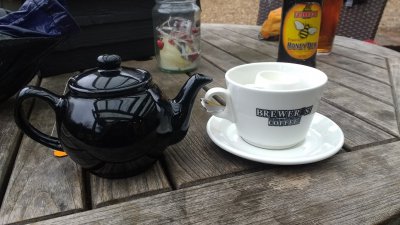 The respite from the rain was much welcomed and after a few trips inside to warm up we set off again bound for Guildford. The weather continued to be hit and miss for the afternoon but on a more positive note I was confident now that the new lightweight waterproof jacket I was wearing was up to the task. Reaching the lovely village of Peaslake and the Hurtwood Inn as the light was starting to fade was perfect timing as I was ready for a pint. 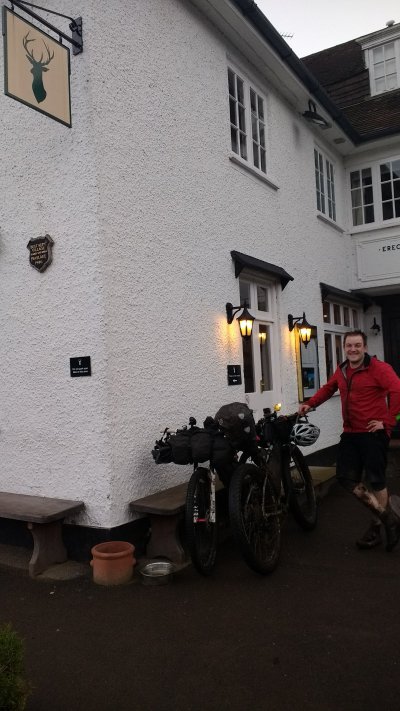 As day three dawned it was a relief to unzip the tent and see blue skies and sunshine. 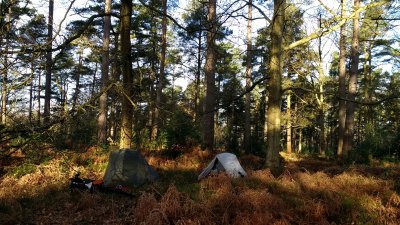 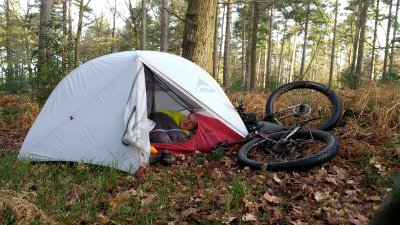 During the night we had both heard strange animal noises. It was a loud barking noise, definitely not a deer and pretty scary sounding - I think it might have been a wild boar but Barry suggested a werewolf... who knows??

Today was our last day on the trip and we would be riding in the Surrey hills which is renowned for its awesome trails. As we set off into the sunshine we could tell it was going to be a fantastic day of riding and our first view at the top of Holmbury Hill had me grinning like a cheshire cat. 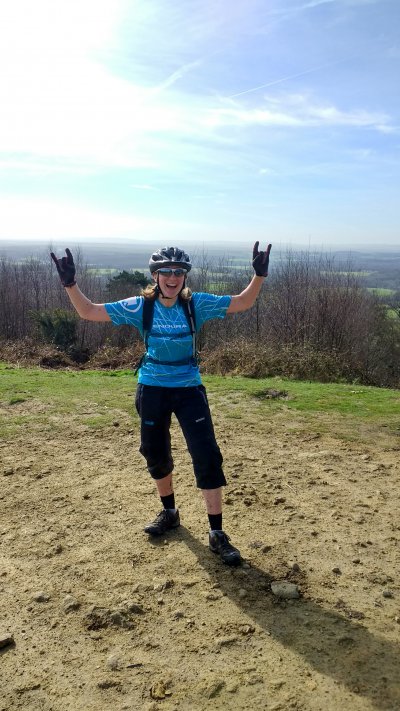 Usually the trails here would be rammed but it was a Monday and although we met a few people it felt like we had the place to ourselves as we cruised over towards Leith Hill. Riding with Barry was so much fun as his enthusiastic whoops of joy through the trails was infectious and before I knew it I was whooping right alongside him like we were two kids. It's times like these when I'm so happy to be outdoors and on my bike that makes me feel alive.

Arriving at Leith Hill we had a snack stop to appreciate the glorious view. 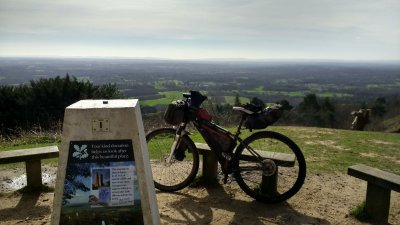 On a whim we decided to head up the tower to soak up some culture. It was built in 1765 and is the highest point in south east England at 329m. 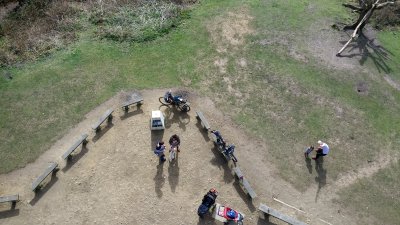 We spent the next few hours playing on the trails, setting up photos and videos of riding. High-fives, shouts of joy and the sounds of wheels spinning filled the hills as we enjoyed every second of it. Riding with someone else is so different to being alone and I am so glad that Barry and I did this trip together as it's a totally different experience. 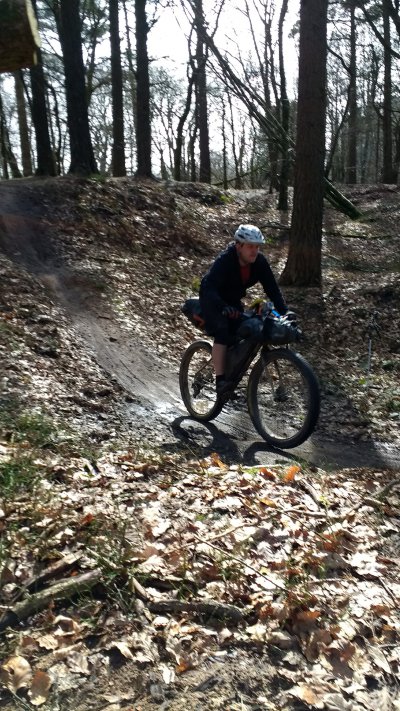 After riding Summer Lightning to Dorking we headed back onto road through Leatherhead and Surbiton to Kingston. Sitting by the Thames for one final cheeky pint in the sun it was strange to be back to society. 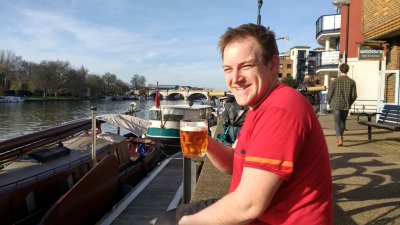 Our trip had only taken us maybe 30 miles west of central London but after two nights of wild camping in woodland it's easy to feel that you're nowhere near civilisation. This section of the Smoke Ring trail definitely delivered on the off-road to road ratio with some seriously fun riding and cracking scenery. These three days were exactly the tonic I needed to feel relaxed, happy and rejuvenated. It's amazing what riding a bike can do for the soul! As for the rest of the Smoke Ring, it's there and waiting for me, until next time....