I'm tired this morning. I didn't sleep well at Leckie bothy last night, mostly because it was too quiet. That may sound crazy but when you're camping you hear the birds and maybe the sea or a river and you don't get that indoors. I heard only one bird and then silence, total deafening silence. I wasn't scared but I find it difficult to sleep with that level of nothingness. I find that my mind stays active and I start to think about lots of things like what it will be like to finish the ride and see all of my family and also what I will go out and buy to eat - lots of green things and no beige foods, haha! I was actually happy to hear the landrover drive past and the digger start up this morning (they are busy with a hydroelectric scheme in the area) as it broke the silence.

I headed back to Kinlochewe, grabbed a few more supplies from the shop and went to the cafe in the petrol station for my morning brew. They had WiFi and so I caught up on a few emails and uploaded my blog. My only plan was to ride the 10 miles to Torridon today and so I was having a rather relaxed morning.

Finally forcing myself to move from the warmth of the cafe I hit the road and it was busy. The cafe owner had told me that there was an extreme triathlon event called he Celtman on this weekend and it meant that the road was busy and Torridon would be packed full of athletes. The ride was nice and leisurely and as usual there were lovely views of the valley. 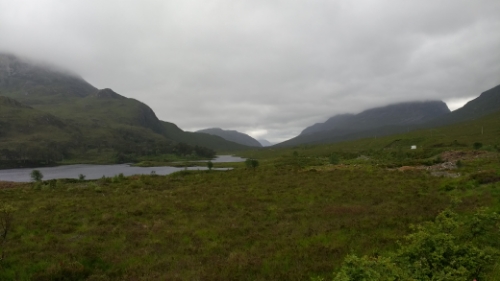 I'd been toying with the idea of staying in Torridon to do some off-roading but it was indeed full and the little cafe was heaving. It was raining and I was pretty wet so decided to stop and formulate a plan for the rest of the day over a nice cuppa. The youth hostel was full as I'd stopped off to check on the way and I didn't fancy pitching in the rain and listening to lots of people get up and ready for a 4am start for the race and so that basically made my mind up for me. I'd continue on the road west to Diabaig and try to get to Craig bothy. According to the books the route was well defined but it's always a bit different with a bike that weighs more than you do!

I should really learn by now that nice small winding roads on the map are never easy and this one was a corker. Up steep roads with sharp turns for 9 miles. Bealach Na Gioathe (pass of the winds) included one huge incline that I had to stop on twice to be able to reach the top but the view was definitely worth it. 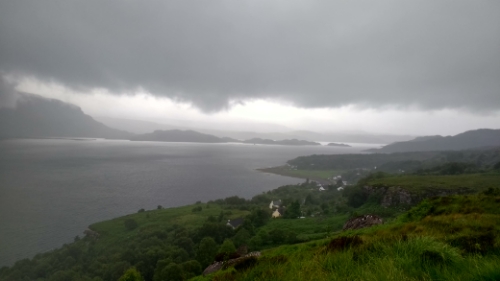 Then came the absolute gem of a road, steep, twisting and all downhill. I chuckled to myself and let the fun begin as I sped down laughing and smiling and losing all of the precious height that it took me so long to gain. The ups of today will become the downs of tomorrow and vice versa when I return from the bothy and so I enjoyed every last bit. 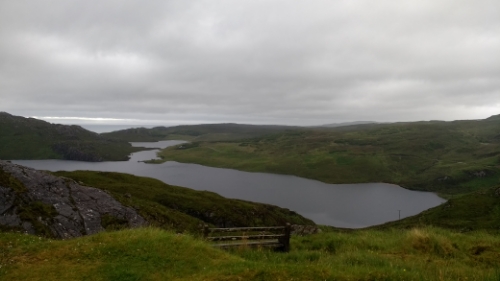 The road had taken a lot more effort than I had imagined and so I stopped for lunch before tackling the 2 mile track that would lead me to the bothy. It was still drizzling but as long as I was moving I was warm enough and so I was back on the bike before long. The track was a stony, rocky path and optimistically I actually started riding along it. Unfortunately though there were lots of large channels for drainage and I had to keep getting off to lift the bike over and so in the end just decided to push the bike. 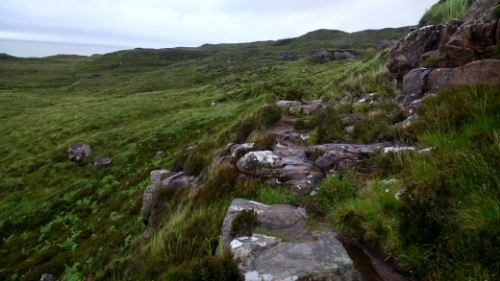 What started out as a fairly flat path soon changed into an up and down rockfest. Hauling the bike over wet and slippery rocks was hot and heavy work but I wanted to get to the bothy and this was the challenge. 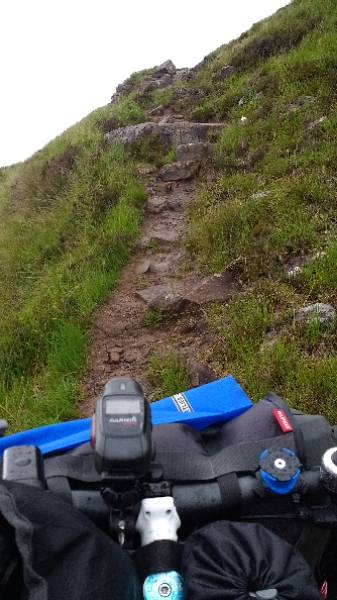 Twice I slipped, once the bike took a small dive off a rocky section and then as usual I ended up losing my foot in a stinking boggy puddle, haha. 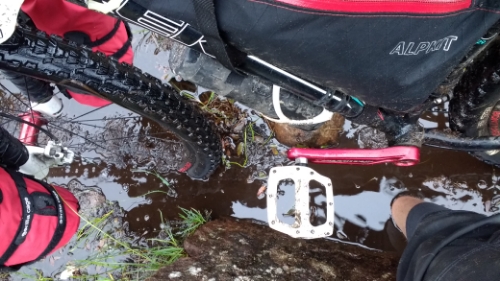 It took me just over an hour and a half of backbreaking effort before I crested the bay and got my first glimpse of Craig bothy. The end was in sight and I'd made it! 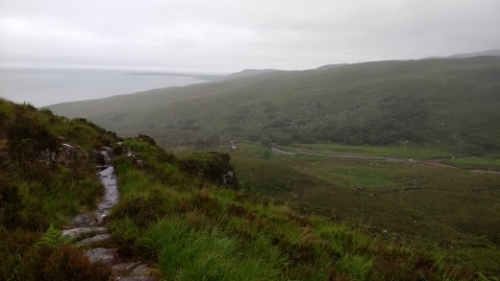 Tackling the last downhill section I was really hoping that there would be some other people here and my wish was granted. Finally, my first bothy that had other people here, yay! I met Ina, Robin and Carol and claimed a bed, yes a real bed with a mattress on it! This bothy was a previous youth hostel that is now maintained by the MBA and it was really homely. Three bedrooms upstairs, a small kitchen area and a large communal area with a fire - it was so worth the slog to get out here. I felt truly happy to arrive. 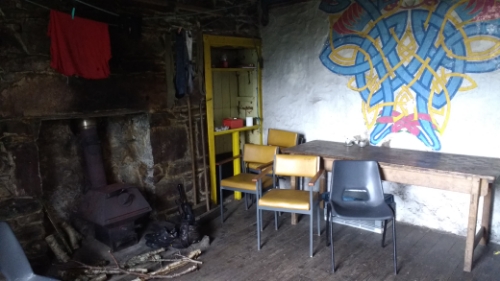 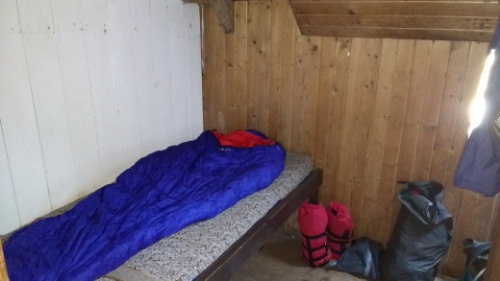 I was feeling rather grotty and so took myself off to the nearby stream with a bar of soap and a towel and had myself a nice refreshing wash, although the midges were out and so I was sporting some bites in rather interesting places by the end of it! 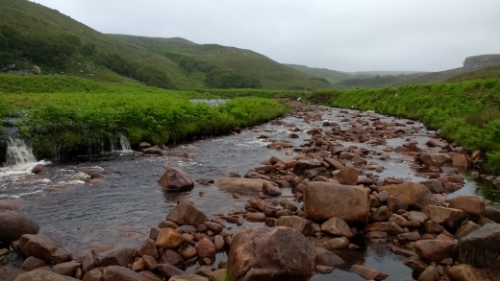 The evening was spent chatting and relaxing and swapping stories of places to see and things to do in Scotland. I had already decided that I would stay here for 2 nights and have a rest day tomorrow to explore a bit around the bothy. Hopefully the weather would improve a bit and then it might be a bit quieter in Torridon when I returned on Sunday.

Today has been a great day. The whole concept of the trip has been realised in one day. A nice ride, a challenging hike-a-bike to a fantastic bothy and the pièce de résistance which is the little whiskey miniature I managed to buy in Torridon at the shop. Bikes, Bothies and Booze -cheers 😀 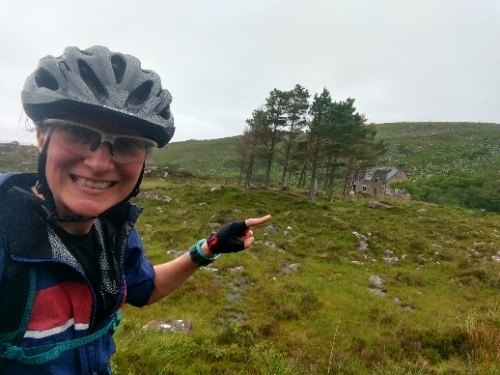