Back in January I decided that the way I was going to get back to fitness was to walk – simple as that. I'd had a few lower back problems in the previous 18 months and was sick of feeling like I couldn't do anything for fear of hurting my back again so I bit the bullet and started to walk. At the time I worked locally and so I started to log my walking to and from work and went out for the odd Sunday stroll and was nicely surprised at the end of the month to see that I'd walked 57 miles. It was at this point that I came across the Cancer Research Shine night walk and I signed up there and then. Not only would I be raising money for a fantastic charity but by signing up for the full marathon I would be ensuring that the next 8 months would have to include a lot of training and walking in order to ensure that I could complete it.

Fast forward 8 months and on Saturday night I was glow-sticked up to the nines and lined up with hundreds, if not thousands of other participants waiting for the Shine marathon to start. I'd done a lot of preparation and training for this walk but was still rather nervous as we all shuffled our way to the start line. Not long after 9pm the countdown began and that was it, we were off, cheering and screaming and walking our way out of Southwark Park to start the 26.2 mile trek around central London. The first few miles were rather difficult simply due to the sheer amount of people crammed onto the pavement and the difficulty of crossing busy London roads and so it took well over an hour to get to the 3 mile mark. Now I'm not going to lie, for me this marathon was about doing my bit for charity but it was also a personal challenge and one which I wanted to complete in under 8 hours so I was hoping that people would thin out a bit over the next few miles to make walking at my own pace a little easier. The route saw us cross Tower Bridge and pass the Gherkin, St. Pauls Cathedral, the BT Tower and the Cancer Research Institute where a group of workers in their white coats stood outside cheering and high-fiving us as we passed. It was really nice to have people spurring you on and the event volunteers who stood on street corners for hours waving their glowing wands and encouraging every walker who went past were amazing, in fact I would find it harder to do their job than to walk the marathon!

As the halfway point came and went the crowd had started to thin out a lot and mostly it was just passing people or being passed rather than bustling along with a bunch of other walkers. I had been drinking plenty and had eaten a fair amount so I didn't feel too bad at halfway. It was at mile 20 though that I started to have some rather frustrating problems with my right knee, particularly as the week previous it was my left knee that was giving me reason to be worried, but I've had this pain before so at least it was nothing new although it was troubling as I was 6 miles from the finish. The solution to the knee problem – ibuprofen, co-codamol and some energising tunes on the MP3 player which included 'Eye of the Tiger', 'Nothings gonna stop us now' and the Journey classic 'Dont' Stop Believing'. Honestly those last few miles seemed like they took ages when realistically I was walking 15 minutes miles which is very good. Finally reaching London Bridge on the home straight just after 4am was a relief and I actually took the time to enjoy the view of Tower Bridge lit up in all it's glory. The last stretch round to Old Billingsgate saw me hyped up and checking the watch to see what time I would make before I finally got there to the mad cheering of two events volunteers and a smattering of people waiting for their friends/family to finish. It was a bit odd to realise that the finish line was in fact inside a building but I walked the red carpet entrance to find the finish line and the incredibly enthusiastic commentator cheering me through the last few steps with a huge smile beaming all over my face. That was it, I'd done it – I'd actually walked my first marathon and thank God it was all over!

Overall, I have to say that the whole thing was a success. I completed the marathon, I did it in 7 hours and 14 minutes, smashing my target of 8 hours and I am very happy to say that I have raised (to date) £270 for Cancer Research. On a more personal level, it's very difficult to sum-up the event because as soon as you finish and head home then your perspective changes. At the bus stop I text my boyfriend to say that I'd finished and that the last 6 miles were hell and that he had to stop me from doing it again next year – yet 2 days later and I've almost forgotten the pain (until I try to walk) and find that my memory focuses on the euphoria of finishing rather than struggles of the last 6 miles. I can most positively say that the event itself was very good, it was incredibly well organised and the many volunteers completely made it for me, so I'd recommend it to anyone who wants to do a walking marathon.

Most importantly I'd like to thank all of those people who sponsored and supported me, it's greatly appreciated and for a great cause! 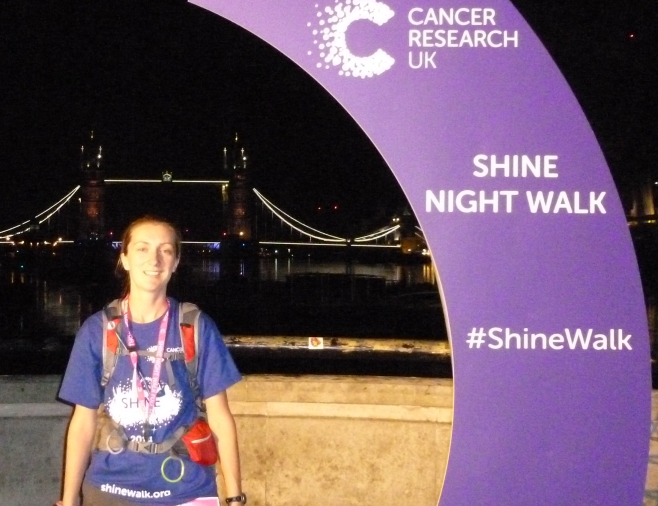