It's 7:30pm on a Saturday night and London Fields is full to overflowing. Everywhere you look there are people and bikes of all shapes and sizes. I'm at the starting point of the Dunwich Dynamo, a 120 mile (200km) overnight ride from Hackney to Dunwich, Suffolk. It started in 1993 and in 1999 became an unofficial event with people simply gathering on a nominated night to ride, with volunteers setting up food and drinks stations along the route. I saw it on Twitter and decided that having ridden my longest ride of about 65 miles during the day, that 120 miles overnight was a good challenge and I certainly wasn't to be disappointed. 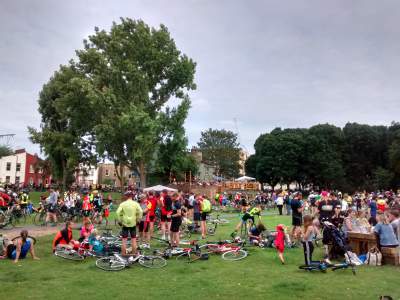 Just before 8pm people started to make their way to the road. I'd paid £1 for an A4 sheet of directions that would get me to Dunwich beach and with an excited and somewhat nervous energy setting in I joined the flow and hit the streets of London. The first few miles around the streets were hectic to say the least. Swarms of bikers weaving in and out of traffic and no-one wanting to get stuck at a red light as they'd lose the route finders paving the way ahead. Car drivers and people in the street were looking around trying to figure out what was happening and it was hard not to feel a part of something rather exciting.

I was riding solo but it didn't feel like it as people spoke to you when they passed and it was a feeling of community as we were all in this crazy ride together. Some people had decorated their bikes with multi-coloured spoke lights and fairy lights and one group of 4 had actually built a 4 person bike and were hoping to make it all of the way to Dunwich.

As the light started to fade the roads became a sea of blinking and flashing red lights and the reality that we would be riding throughout the night started to set in. 60 miles in at Sudbury fire station there would be an organised pit stop serving food and drinks so my aim was to ride until there where I'd take my first break. With directions to follow, scenery to look at and traffic to contend with, those first miles ticked over rather easily. Pubs along the route were laden with riders spilling out onto the street, drinking refreshing pints and topping up water bottles.

The ability to enjoy the scenery disappeared as darkness set in and this was when I started to realise just what I'd taken on. I was going to be riding until the sun came up again and even the halfway point seemed a very long way ahead. I really wasn't feeling it from about miles 40 - 60 and I questioned what I was doing and why. I couldn't explain why I was even feeling like this but I seriously considered just stopping and trying to find a train station where I could spend the night to get a train home in the morning. At this point it was pitch black and we were travelling by our lights through country roads - all you could see was the odd red light ahead and the spot of light illuminating your front wheel and beyond on the road. I realised that this was the mental challenge of the ride, to cope with the monotony of mile upon mile of darkness with just your own thoughts for company.

I reached the pit stop at Sudbury fire station around 12:30 and sat and ate my bagel on the grass outside whilst people queued to get burgers and sausages from the BBQ. Feeling sleepy once I'd stopped I quickly got back on my bike and headed out once again into the night. Along the dark country roads it was sometimes possible to see the scenery lit up by the moon and it was wonderfully serene. Although there were riders around I was riding solo and there were stretches where I didn't see another rider through the winding country lanes. The only company I had then was my thoughts and the odd bat swooping down along the roadside. It was quiet and peaceful and this was when I found my rhythmn, simply turning the pedals and flying through the night.

Needham was my next aim at around 80 miles along the route. There was a pit stop setup there and I was looking forward to a quick rest as I was feeling rather tired at that point. I saw a small opening with some riders ahead and figured that this must be the stop so I pulled over, grabbed a coffee, some water and a snickers bar - sorted. It was now 3:45am and I was surprised at how the last few miles had seemed to fly by. There were only 40 miles left to Dunwich and it all started to seem rather possible that I'd make it to the end.

It's funny but the daylight seemed to creep up on me. I'd hardly realised that it was getting light until I saw the sun rising over the crop fields. It can't have been much after 4am and I was riding and chatting with a guy called Phil - again I'm not really sure when and how it all came about either, tiredness was obviously playing it's part at this point. As daylight truly surfaced the scenery was beautiful, rolling fields and quaint villages and country lanes, at times it was like I'd been transported back in time. With about 10 miles to go I started to see people heading towards us in the opposite direction. I'd heard that some hardcore people get to Dunwich and simply turn around and head the 120 miles home but it's another thing to actually see it. The last 10 miles seemed to drag on, maybe it's because you know you're nearly there and your body starts to think about when it can stop pedalling and start sleeping but I'm glad I had someone to chat to on those miles as it really helped take my mind off the fact that we were so close but not yet there.

All of a sudden Dunwich was upon us and Phil led us down through the village to the stony beach that was to be the end of my journey. 120 miles, the longest I'd ever cycled before by at least 40 miles, and I'd managed it in a remarkable 9 hours, again 3 hours quicker than I'd thought I would make it. It was 5am, the sun was low on the horizon and it was a wonderful feeling to finally make it. 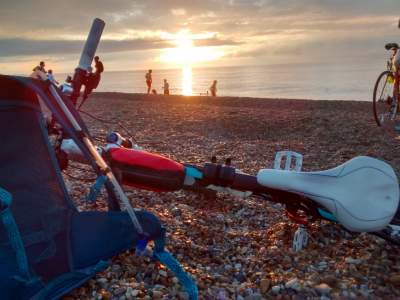 Finding a spot amongst the other riders, I decided to follow suit and take a morning swim to ease my weary muscles and wake up my weary mind. The water was fairly cool but rather refreshing after a surprisingly warm and sweaty ride tjhrough the night. Swim complete I spent some time chilling on the beach watching people arrive and celebrate before making a move towards the cafe for a nice cup of tea. It all seemed a bit surreal to have stopped riding but the elation and a shared sense of achievement amongst the riders made for a lovely atmosphere and instead of tea I celebrated with an ice cold can of lager at 6am for breakfast. 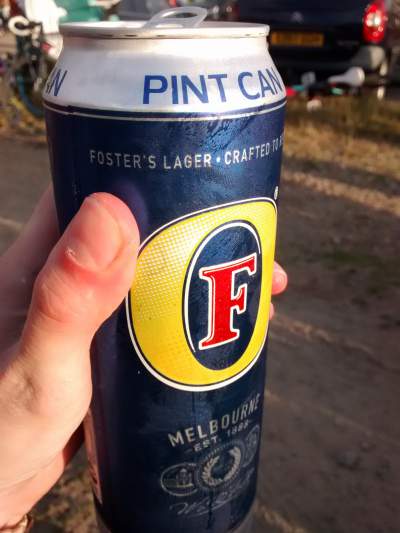