Back in October last year I set off on an adventure to ride the whole of the South Downs Way which ended rather prematurely 30 miles in with a dislocated thumb. Although very disappointed it certainly didn't put me off the challenge and after buying a new mountain bike in January I found myself in Winchester at 8am on Good Friday kitted out and ready for another shot at the SDW. I guess it was a combination of naivety, optimism and the thrill of a big challenge that meant that I was attempting to cycle to Eastbourne and back within 3 days - something planned without taking the Great British weather into account! 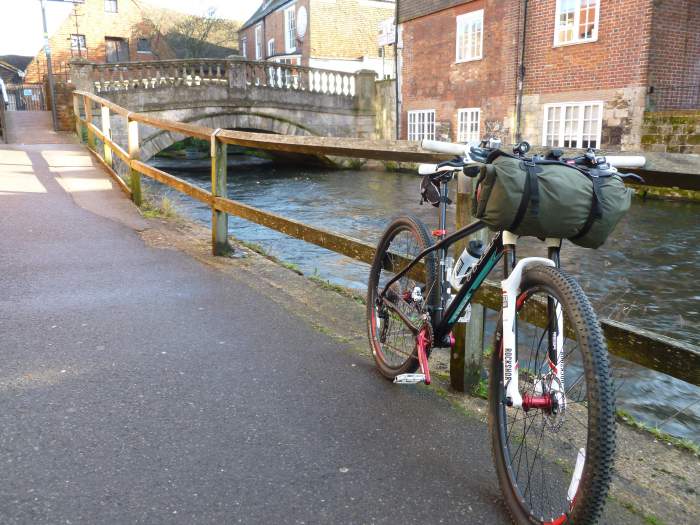 I set off under blue skies with my bike loaded with 2 nights worth of kit, testing out my new Alpkit Airlock Dual 13 litre Drybag with the Joey handlebar harness. The plan was to cycle the 63 miles to Truleigh Hill Youth Hostel on day 1, then the 70 mile return journey to Eastbourne and back to the Youth Hostel on day 2 and finally the 63 miles back to Winchester on day 3 - simples ey??!!

The first 20 miles seemed to go by in a blur, the trail quite familiar to me and the hills proving as difficult as usual given that all of my riding this year has been on flat roads. The weather was beautiful, sunshine and blue skies and a fantastic day for cycling. I'm not sure how I managed it but I got lost in Queen Elizabeth Country Park, mistakenly going up a particularly steep red mountain bike trail before having to descend again on the road to find the SDW route, but by early afternoon I had passed the 30 mile marker where I'd previously had to bail out and I celebrated with a brief stop on Harting Down for a breather. One of the things I enjoy about hiking is that walkers always say hello to you along the trail and it seems that this trait is one also shared by cyclists. I'd literally just hopped off my bike at Harting Down before the cyclist next to me came over for a chat. His name was Jason and we chatted about plans and rides for a good 10 minutes before he headed off to continue his route whilst mentioning that I could catch him on Strava. It was nice to chat with a fellow biker but time was cracking on and I had another 33 miles to go so it was back on the pedals towards Cocking. 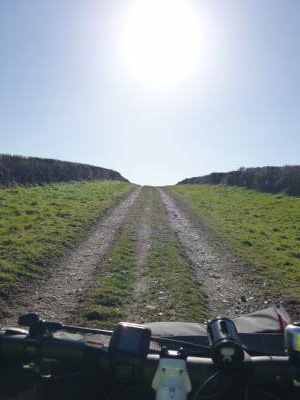 The afternoon miles were very pleasant, the sun continued to shine, the trail was challenging and thrilling, each breath-sucking hill followed by a hair raising downhill that tested my nerve, brakes and suspension - what more could a girl want! I had hoped to arrive at the Youth Hostel at around 6pm so that I could get a shower before dinner at 7pm but that started to look rather unlikely when I somehow took a wrong turn and ended up at a dead end by a farm around 6pm with only a few miles left to go. It had been a long day and I'd obviously just taken my eye off the signs so I retraced my steps to a crossroads where I took another route only to find I still wasn't on track. I got my phone out to look at Google maps when another mountain biker appeared who thankfully knew the area well and pointed me in the right direction up a road to find the trail again. At this point I knew there were only a few miles left including the slog up Truleigh Hill to the youth hostel but it was hard going and time was plodding on. I finally pulled up to the youth hostel just after 6:30pm having watched the sunset on my way up the hill, it was a beautiful end to a hard days cycling. 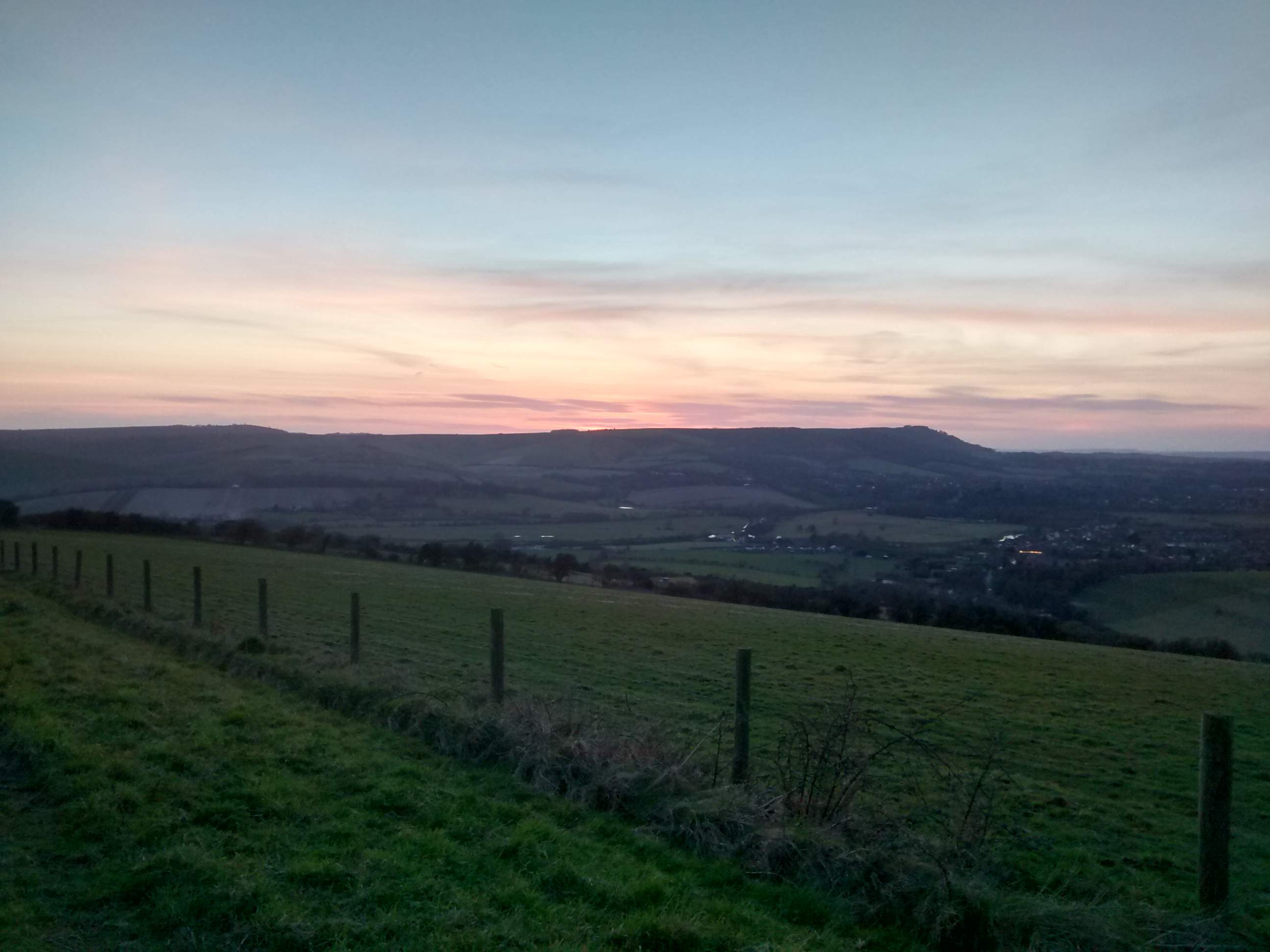 With no time left before dinner to do anything but dump my stuff to claim a bed in the dormitory I sat down with 4 others, apologised for my mud splattered and slightly smelly appearance and tucked into a feast of pizza, pasta, salad and lemon sponge with custard. Talking with the others around the table there was a mix of walkers and cyclists and it was really enjoyable to sit and chat with like minded people, a lovely way to end a tiring but successful day on the bike.

I awoke early on Easter Sunday to the wind whistling through the windows and the sound of storm Katie gathering outside. I'm not really one for checking the weather forecast and so when I'd planned this trip I hadn't thought much about the weather until the news about the anticipated storm had surfaced. Taking a quick look outside I knew that my plans would have to change and that just getting the 34 miles to Eastbourne was going to be a real challenge in itself, never mind another 34 miles to return to the hostel. Being able to admit this and adapt my plans to simply get the train back to London from Eastbourne was crucial and I knew that attempting anything else would be both unrealistic and unsafe.

I ate breakfast with Rebecca who I'd chatted to and eaten with the previous evening, the weather being the predominant topic of the morning. I overheard many conversations of people changing plans and heading home early because of the storm but I knew that this would be the making of me - this trip was meant to be a challenge to push myself to my limits to see just what I was made of. Any trepidation that I had was pushed away as Rebecca assured me that I could do it and so I packed up and headed out into the mist full of a good English fry up and a bucket-load of adrenalin. 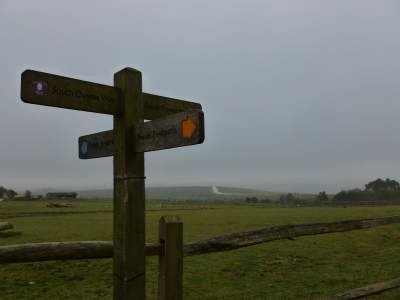 As soon as I set foot outside I felt the power of the wind. If cycling has a nemesis then it's most definitely the wind and this was my battle of the day, me and my bike versus nature. Devils Dyke and Ditchling Beacon were the first landmarks of the day and given the weather there were a surprising number of walkers out. Mile after mile I plodded on, the wind growing stronger throughout the day - I had lost count of the number of times I had been blown off the bike, the monotony of the wind on the right side of my face a constant struggle and a mental challenge. I found myself riding at a 45 degree angle into the wind, always a headwind and never a tailwind and it was when the down-hills became just a hard as the up-hills that I finally cracked and shouted out, 'screw you wind!'.

Every rotation of the pedals was hard and I found myself asking why I was doing this, this is not fun. That was it - the point that I'd searched for, near breaking point. This is where you dig deep, just keep pedalling, just keep going and wait for the descent to get away from the exposed high ground. Hours passed until I finally reached Alfriston, the last notable place before Eastbourne. Unfortunately at some point in the ride, the wind had opened by backpack and my packed lunch had been lost along the way so here I fuelled up on the last of my rations, a Dairy Milk and two oat bars. From here I knew that the finish was in sight, that it was one last hard push to achieve my goal. Up and over a never-ending hill it started to drizzle until finally there was an amazing sight - Eastbourne in all it's glory! 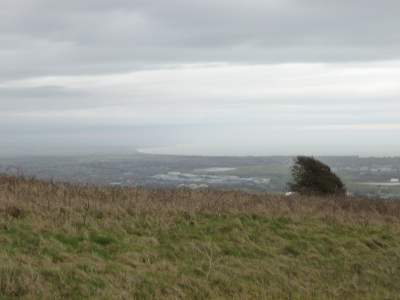 I rode past a golf course and five minutes later I was at the Eastbourne trig point, knowing that I was within reach of the end of my journey. It's hard to describe the feelings that come when you know that you're going to achieve something that you've worked so hard for. I stopped and took a photograph, a lasting memory to the relief of being so close to the end. 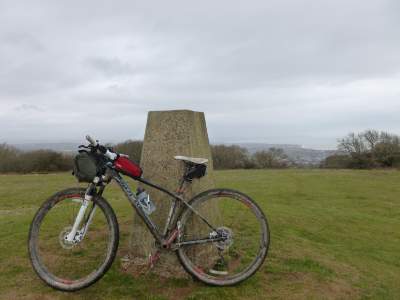 Ten minutes later and I was at the end of the bridleway meeting a main road. Unlike the start/end point for the walkers there was no signpost saying Winchester 100 miles and although rather disheartening I knew that I had achieved something special and that this was a journey that would stay with me for years to come. At a point in my life where I was questioning everything about myself and the future, I had managed to achieve what I had set out to accomplish - the 100 miles from Winchester to Eastbourne on my own, just me and my bike - and what an adventure it was!