I woke early to an already hot tent and looked outside to see blue sky and sunshine, summer is here I think! It was so hot that I had to get up and was on the trail heading the 4 miles back to the Boathouse by 9am. 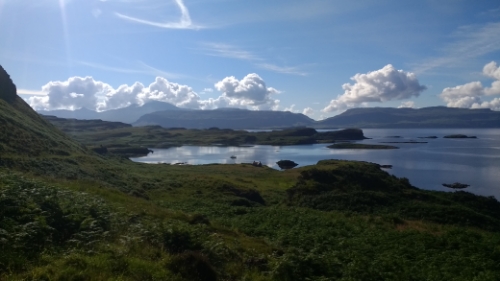 The ride back was quicker than I expected and before long I was sat with a big pot of tea and my second breakfast outside the Boathouse. Taking my time I got the ferry back to the mainland and started pedalling around 11am. Today's mission was to follow the road around Loch Na'Keal going over the pass south to Killiemore and then out west to Burgh where there is a fossil of a tree in the cliffs.

The sun was hot and the miles ticked by as I rode around the loch. My legs felt good and I was in a happy place tootling along nicely, passing the edge of the Ben Mor estate. 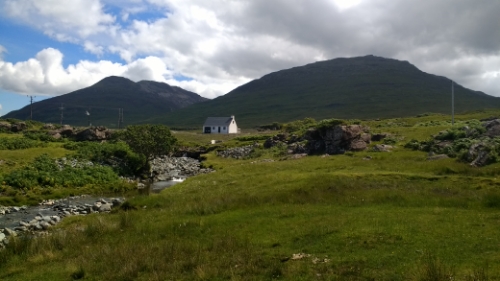 The miles were passing by and it wasn't long before I was up and heading over the pass. 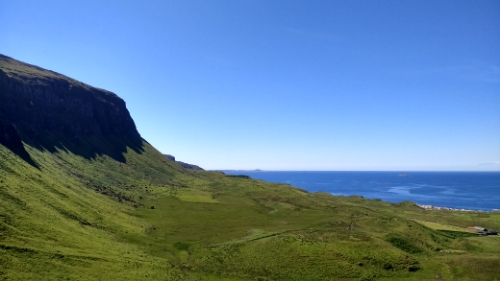 After a short lunch stop at the bottom I continued on towards Burgh. There was a cafe and I sat in the shade with an ice cold can of Coke to cool down and top up on sugar. Asking the owner about the fossil tree she said it was a good 5 or 6 miles - I had hoped it would be less but I had plenty of time.

The going was tough with a long uphill but I could see the track ahead promising a nice route. 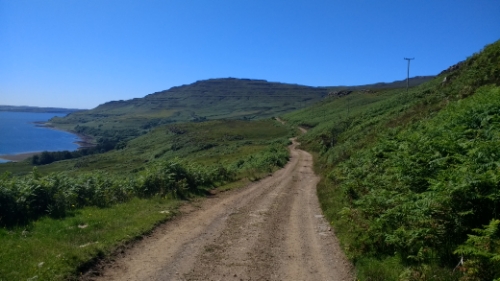 Riding past Burgh bothy I was nearing the point where I would have to leave The Beast and head out on foot. The bothy is owned by the National Trust and so you can't just turn up and stay there which is a shame as it looked rather cute. 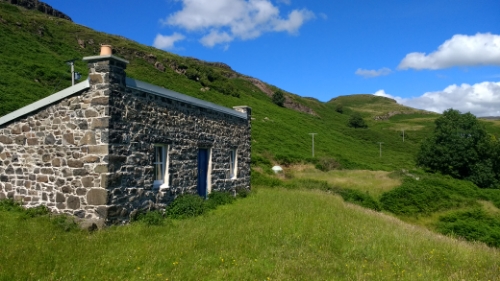 Setting off down the steep coastal path on foot the sea was a beautiful shade of light blue and the water was twinkling in the sunlight. There was only me and the sheep and the path soon became a rocky narrow track. A sign at the last gate had said that it was 2 miles to the tree but the walk just seemed to go on forever. It was rough on my ankle and I'd slipped on it a few times and wasn't too happy. Crossing stony beaches and then climbing up the track again I really did wonder if I was on the right path and was beginning to feel the heat. Just as I considered turning back I saw a ladder down to the beach. 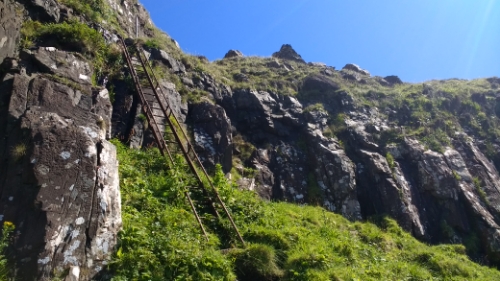 Now to find the fossil tree, there was only one problem, I had no idea whether to go left or right! Whilst walking along the top path I'd seen a few people down below and so I headed left to where they had gone. There were lots of interesting rock formations to be seen but they weren't easy to navigate. 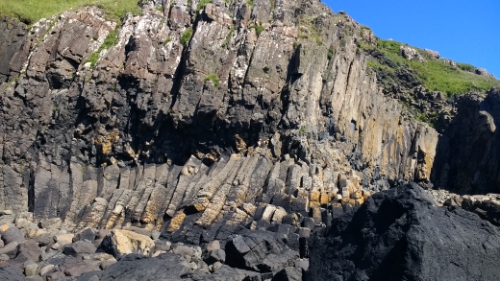 I even found a jellyfish in a rock pool.

No fossil tree though!☹️ I headed back to the ladder and started to walk the other way. Twice I went over on my ankle and pain shot through me. This was silly, I was starting to get a little bit cheesed off and was worried about injuring myself again. I could see two waterfalls and so headed over towards them. The cliffs looked different here but I couldn't see anything that resembled a tree. There wasn't a soul around to even ask and I felt rather stupid not to be able to see it. The heat of the sun was scorching and there was no shade to be found and so I made the decision to turn back. I still had to walk back on my ankle and then ride the 4 miles back to the road and so I gave up on the fossil tree. The waterfall on the cliffs would have to suffice. 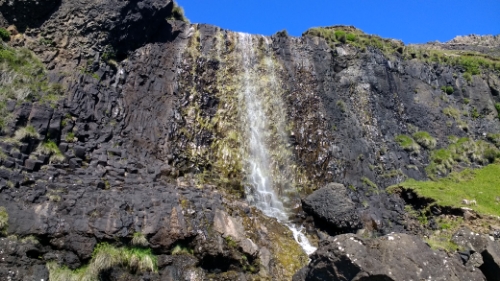 It was strange to think I'd come all of this way for nothing and I'd had enough of walking the rocky twisting ankle-killing path. All I wanted to do was get back on my bike.I came across two walkers that I'd seen earlier and they asked me if I'd seen the tree. I sheepishly told them that I couldn't find it and they said that another woman had passed them and she hadn't seen it either so I immediately felt better.

Finally back with The Beast I was relieved not to have to walk anymore. Back to the pedals where my ankle didn't hurt. 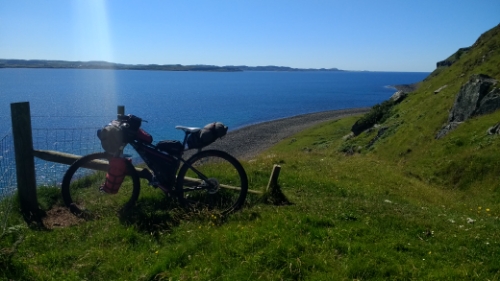 Riding back the heat was searing. I had been drinking enough water and applying sun lotion but I knew that I was probably bright red. I am certainly not complaining about the weather, more of my inability to tolerate it for hours - a little bit more shade would have been a good thing.

Reaching the road again I was happy to just ride the smooth tarmac. I had ridden 40 miles today and my ankle needed a rest and so when I came to a nice stream not far from the road I would take tomorrow I setup camp for the night. 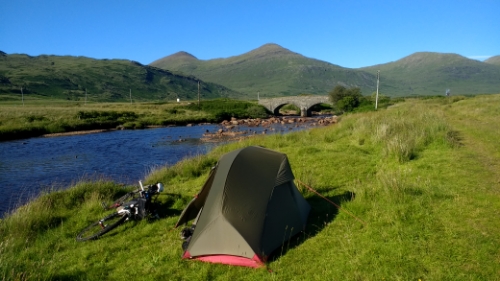 A bit of strange day in all, I think I've felt a bit alone today as I haven't really seen or spoken to many people. Never mind, time to get my ankle rested and ready for tomorrows adventures!