With the light nights in abundance and a recent bout of good weather I suggested to a friend that instead of catching up over our usual beer-fuelled bar crawl that we should make the most of the evening and head out for a nice long walk. It was decided that we would meet at Wimbledon station and aim to reach Richmond Hill for about 8:30pm to enjoy a sneaky pint outside The Roebuck where we could watch the sun go down.

The route is one that I've taken many times before when I used to walk to my previous workplace - up Wimbledon Hill to The Village, through Wimbledon Common to Richmond Park (via the Robin Hood Gate entrance) heading north past Spankers Hill Wood, down through the Pen Ponds and then up to Sawyers Hill to the Richmond Gate entrance.

We met at 7pm and I couldn't believe my eyes - Tim didn't have his shorts on! In our previous Year of Microadventures last year he wore shorts when I thought it was freezing and today with the temperature nearing 20 degrees he was wearing trousers, was this a moment of madness or foresight to a chilly post sunset walk home - we were to find out later....

I love Wimbledon Common and I always find it hard to believe that I'm still only a few miles from civilization and the bustle of London when I'm walking there. It's pretty large and I have been known in the past to go slightly astray trying to navigate my way around but I know the route that cuts through to Richmond Park like the back of my hand. The evening sunlight filtered through the tree canopy covering the bridleway and warmed our faces as we listened to the birds chirping and chatted about what we'd been up to lately.

Approaching the Pen Ponds in Richmond Park was a beautiful sight as the sun dipped lower in the sky and cast a golden glow across the water. 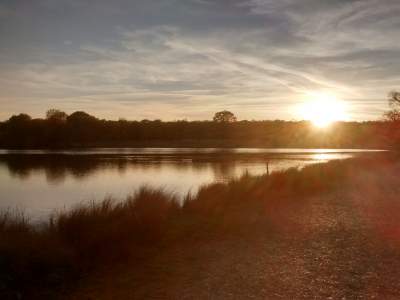 With time running short before sunset we made a swift walk up the hill towards Richmond Gate and claimed a bench overlooking the Terrace Gardens across from the Roebuck pub. The sun was slowly disappearing and we'd managed to make it in time to enjoy the last of the days light. Unwrapping our 'packed lunch' evening meal Tim brought out a couple of Hogs Back Chocolate Lager's for us to enjoy - you can't get much better than that in my opinion, beer and chocolate are two of my favourite things in life! 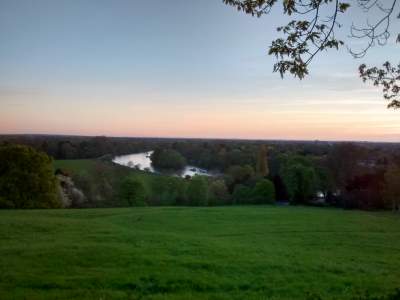 It was much cooler now and I was feeling rather underdressed in my shorts so we headed indoors for a quick pint before the walk back to Wimbledon. Not suprisingly it was now rather dark as we left the pub and I was feeling the chill as we headed through Richmond Park. There was no moon on display but we managed without a headtorch and it was a nice peaceful walk back to Wimbledon via the Fox & Grapes for a nightcap.

What a lovely way to spend an evening - fresh air, exercise, beautiful views and a couple of pints.....roll on the rest of the summer!