It was very windy last night on Loch Lomond so I was awake and bleary-eyed just after 6. On the road by 9am today I was headed south for Glasgow and beyond. 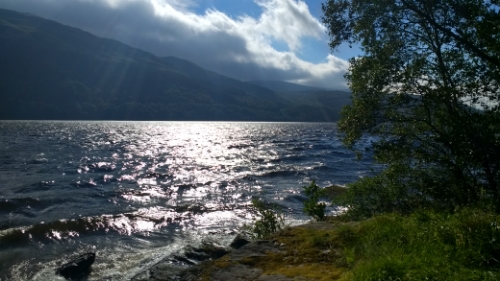 The ride along the loch was windy but pretty scenic and as I arrived in Balloch around noon I was making good progress. 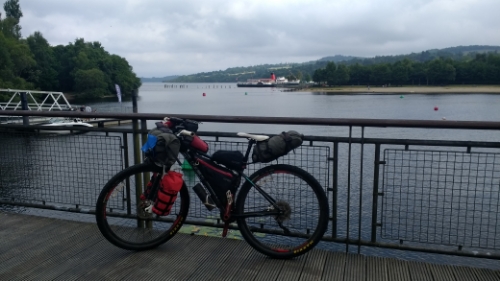 Riding along the canal to Dumbarton was lovely. It was bright and dry and I was happy just spinning the pedals. The great thing about canals is that they're flat and so I was cruising along at a nice speed and eating away at the miles. 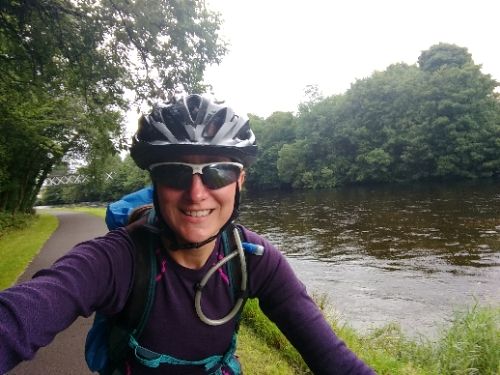 Connecting with a stretch of the Forth & Clyde canal Lock 27 proved rather handy with a lovely pub. I left The Beast outside and headed in to grab a beverage and returned outside to see The Beast on the floor and my helmet floating a foot out into the canal by the reeds. These things can only happen to me I'm sure as I hit the deck commando style to retrieve a soggy helmet and gloves! Needless to say I needed my pint after that, haha. 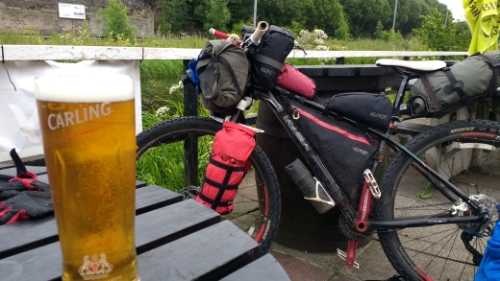 Arriving in Spiers Wharf in Glasgow was like deja vu as I'd come into Glasgow 11 weeks earlier on this path. A lot has happened since then and it was strange to be back in the same spot as a different person - changed by the experiences of my time away. 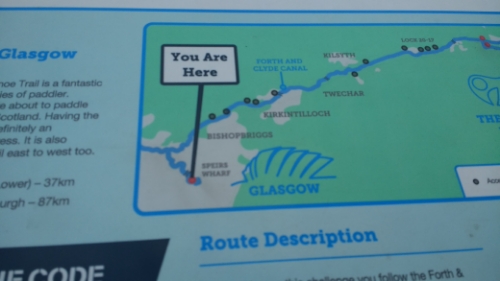 This was the part that I had been dreading all day, cycling through Glasgow. Todays riding had seen me inching my way towards civilisation and this was the greatest hurdle. It has been odd to see lots of houses, cars and people and the noises of a city. I can no longer see green fields and hear the birds and it's all rather a lot to take in.

Luckily I remembered my way through the streets and down to the Clyde. From here I could pick up a national cycle route to take me south and east towards Hamilton where I hoped to be far enough from the city to find somewhere to camp. The ride was a mixed bag of nice river paths to badly signposted routes through housing estates where I was looked at like a lunatic. I really felt out of my comfort zone and was willing to be back on country roads soon without the gaze of onlookers, the pointing of fingers and the sniggering.

As I rode into the Chatelheralt Country Park I stopped in the familiar green surroundings and had a breather. 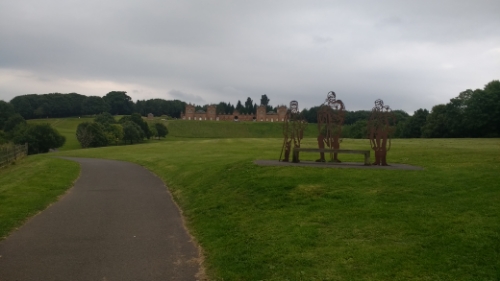 I was pretty tired and starting to look at the map to see where I could possibly camp for the night when I realised that I was in Lanarkshire. Back in May when I met David and Jean when getting the ferry over to Gigha, Jean had given me their address and telephone number in case I was ever passing by and they lived in South Lanarkshire. Out of curiosity I looked it up and it was about 8 miles south of where I was. I hummed and hahed about ringing them but then I figured that they wouldn't have offered if they didn't mean it and so I rang the number. David answered and I explained who I was and thankfully he remembered me! I asked if they would mind if I camped in their garden for the evening if they were in and immediately David offered me a bed instead. I said the garden would be fine and that I would be with them in about an hour.

Arriving just as the rain started it was lovely to see Jean again. We chatted like old friends and I backed down and accepted the offer of a bed. After a hot shower I heated up my dinner and was plied with tea and biscuits. David then arrived home from Church and then their eldest daughter Ruth popped in. It was a lovely evening and so nice to see them again, we were like old friends.

After a whopping 67 miles of riding today, my longest of the trip so far I was glad to sink into a comfy bed. I never imagined this morning that I'd be here, that's the glory of this trip, you never quite know what each day will bring! 😀