Well my decision to sleep on an incline wasn't the best as I spent most of the night sliding off my sleeping mat, however that wasn't the only problem. At 2am I was wide awake and couldn't get back to sleep. At 3am I was hungry and so I gave in and ate the last bread bun from last nights dinner hoping it would do the trick. I didn't want to get up at 8:30am and so lay in my cosy bag until 9:30am. It had rained during the night and there had been heavy showers this morning but at least there was sunshine in between the showers. The wind was very strong again today and it looked like it could be a grim day.

I was just finishing packing away the tent when the rain came and so I was rather wet as I pulled up to Dunvegan Castle cafe and in need of a steaming pot of tea. I was in two minds whether to pay to go into the castle and gardens because it was £13 and to be honest I hadn't read or heard much about it. Even the lady in the cafe didn't sound very convincing when I asked if I should bother going and so I decided to give it a miss.

I was headed for a ride around the Duirinish peninsula today which would take me to the most westerly point of Skye, Niest Point. It was hard going right from the off as the wind was coming from the west. A quick second breakfast stop at Skye's oldest bakery would help, surely? 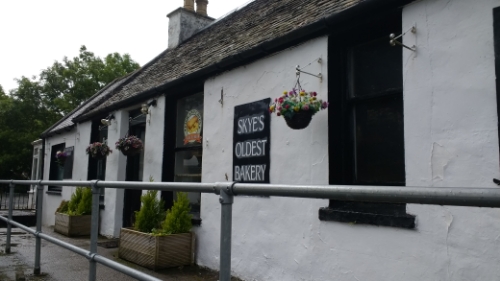 I went for the healthy option of a blueberry muffin (one of my 5 a day!) and it was divine. Soft, light and delicious - I could have eaten more than one! Slightly heavier but happier I made my way out of Dunvegan and onto the road to Glendale.

Singletrack roads with less traffic and a whole world of scenery to take in, lovely. The headwind however was not so pleasant but the route is a dead end road and so I hoped that on the way back I'd be rewarded with a nice tailwind. 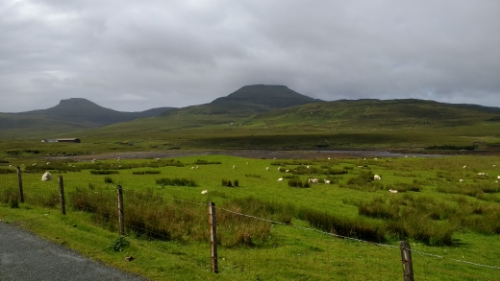 There were 3 road cyclists out for a ride and I'm pleased to say that on the 16% incline the skinniest one got off and pushed and I just kept on pedalling straight past them as they took a breather halfway up the hill - amateurs, haha!

The downhill reward into Glendale was beautiful. 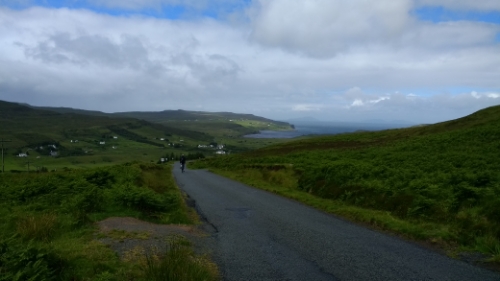 It had been hard going and I was already feeling it in the knees so decided to have a stop at the cafe as it was the only one on the route today. Plus it would be nice not to have the wind screaming in my ears for a while.

Suitably refreshed I headed on a scenic detour through Milovaig to see the dramatic cliffs of Biod an Athair. The sun even made an appearance! 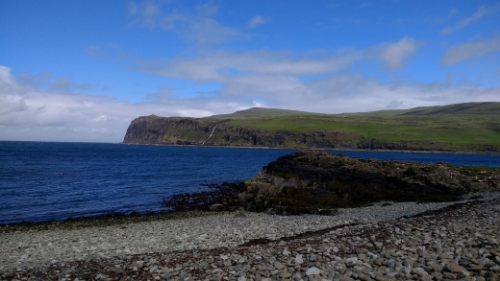 The next few miles out to Niest Point were pretty brutal. The wind was so strong it blew me off course twice and off the bike once. The hills were made twice as hard by the headwind and I really was hoping that I could just hurry up as I was sick of the constant pounding of the wind. Finally approaching the hoards of cars I couldn't see the lighthouse that is meant to be there but I could see a long path down. 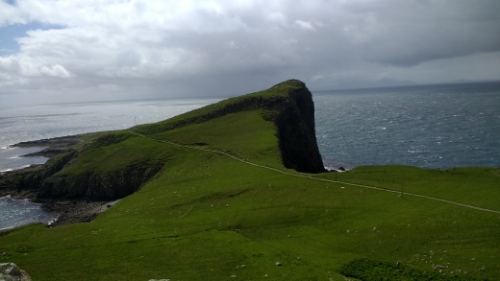 Leaving the Beast and my heavy backpack I headed for the track down. I'm glad I didn't try and bring the bike down as it was really steep and some parts were particularly breezy. You could hear the wind whistling around the rocks but the views of the cliffs were sublime. It reminded me of Jurassic Park. 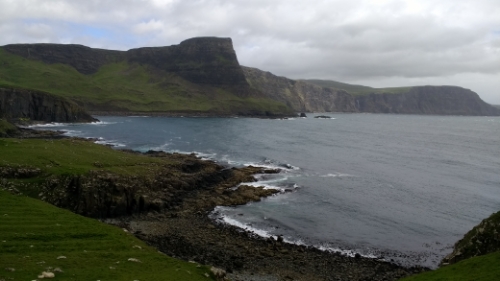 As I rounded the last corner I could see the lighthouse. It looked like it could do with a bit of TLC and a good lick of paint but I suppose it gets beaten with the weather out here. 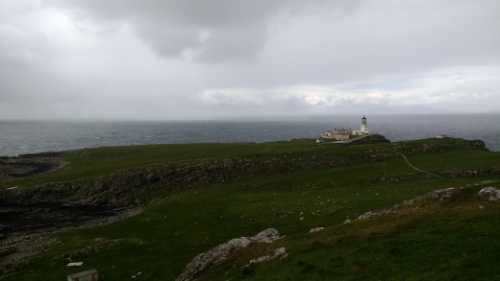 Most of it seemed abandoned and locked up but I had a wander around and after a heavy shower the sun came out again, yay. 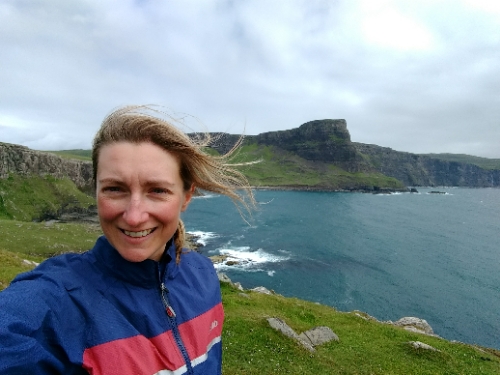 Heading back to the bike I had already decided that I wasn't doing the extra loop over the hill at Feriniquarrie as I was tired enough and didn't want to risk overloading my already creaking knees. Apart from the first hill I don't think I pedalled much at all in the next 10 minutes. I flew with a tailwind 3 miles back to the cafe and couldn't believe that it had taken me so much longer to get there. Another brew was required before heading back to Dunvegan and south.

I could have fallen asleep in the cafe, soothing music and hot tea and no wind attacking me. I dragged myself up and out again though with the jolly thought of the tailwind carrying me towards my bed for the night.

Riding past the folk museum at Colbost I passed a small red car and then heard shouting behind me. I thought I'd dropped something and then I recognised John. I couldn't believe it, it was Anne and John that I had met a week prior in Loch Ewe, amazing! I knew they were in Skye but what a fantastic coincidence that we bumped into each other again. We greeted each other like long lost friends and it put the biggest smile on my face to see them again. 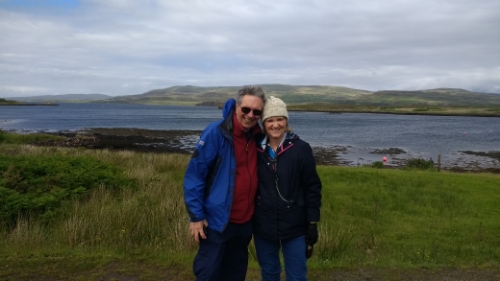 After a wonderful chat we went our separate ways again. What a boost to my day, they are such lovely people.

With the wind in my favour the riding was much easier as I turned south. The sunshine and showers were taking turns but the views just looked even better when the sun shone. 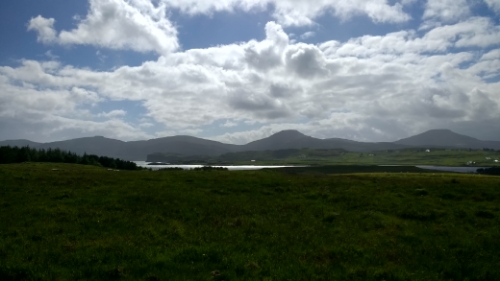 Rounding the headland at Loch Caroy I decided to camp for the night. All I can hear is the pounding of the waves on the rocks and the blowing of the wind rocking the tent. Ah, home for the night and time to relax. 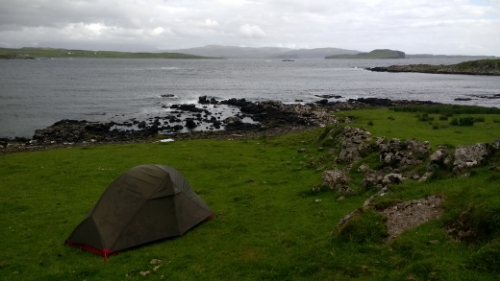