After a very enjoyable ride a few weeks back with the London Mountain Biking Club I jumped at the chance to sign up for their latest 40km cross country ride from Guildford.

We met at Guildford Station and it was nice to see a couple of familiar faces from the previous ride and meet a whole new bunch of riders all raring to go. The ride was led by Tim and as soon as we were all present and correct we were off and headed for the North Downs Way. Having walked the section up to St Martha's Hill before I knew that I was in for some sand and steep inclines and it wasn't long before I was puffing and panting up the hill towards the church at the top. A slight breather and a group photo later and we were ready to move on. 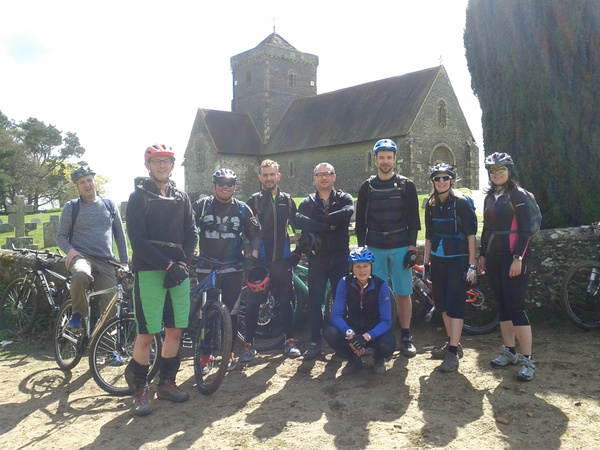 As a biker you always know that an uphill climb will eventually reward you with a downhill and I wasn't disappointed with out first adrenaline filled run leading us south towards Chilworth. Blue skies and sunshine filtered through the pine trees over Blackheath and the mix of terrain kept me challenged and excited as we rode towards our first snack stop at Bramley & Wonersh disused railway station. I was surprised to find that I recognised where we were as it's not an area I know well but the station is part of the Downs Link which runs from Guildford to Shoreham-on-sea and I rode it last year.

Back on the bikes again we rode through Bramley, I really do love to see these quaint country villages, it's so easy to get caught up in big city life in London and forget about the beauty of the English countryside. The next 7km was a mix of woodland, bridleway, gulleys, hard muddy molehills, soft clingy mud puddles and a lot of short uphills and thrilling downhills - not to mention the abundance of bright blue bells lining the sides of the trail. 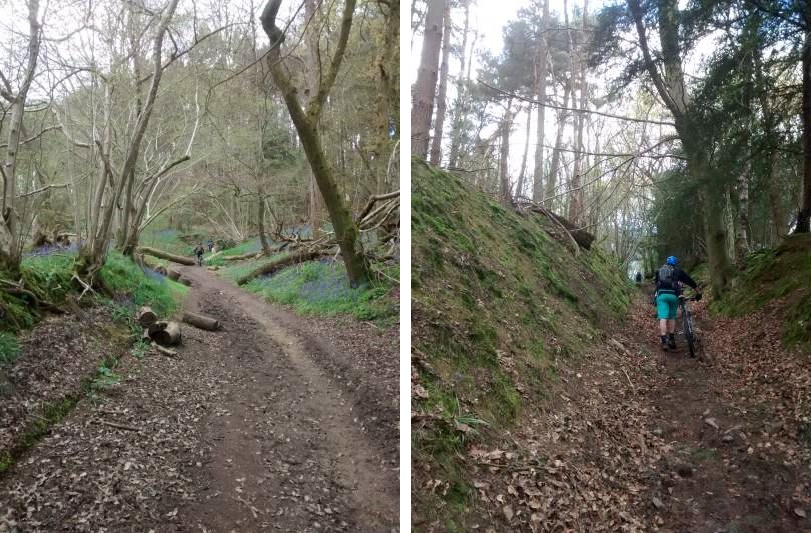 At the second highest point of our ride and not far from our designated lunch stop in Hascombe there was a beautiful view east towards Palmers Cross - we couldn't have asked for a better day for a ride! 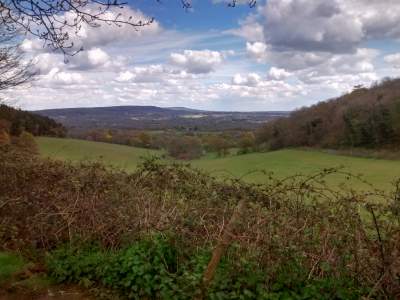 As we were nearing the halfway point in the ride and about to start the descent to Hascombe, Tim gave us an insight as to what to expect on the downhill, large rocks and a fast ride, so the message was to watch out and slow down. He certainly wasn't wrong as I hared down the track, the rocks were huge and a few times I thought I might catch a pedal or the chainring but luckily I managed it and joined the others at the bottom - that was certainly the most technical downhill section that I've ridden so far and the smile on my face afterwards said everything.

We stopped for lunch at The White Horse and sat outside in the sun. I pushed the boat out and had a lager shandy - it's against my religion to go to a pub and not have a drink but I thought I'd better take it easy given that we were only halfway through the ride. 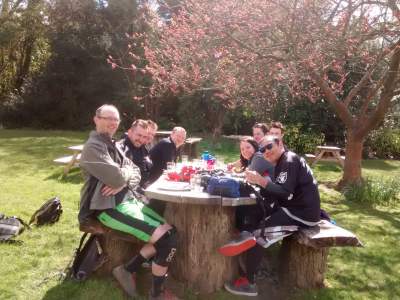 It wasn't long before we were setting off again and as is customary on these rides there was a rather long uphill section as soon as we started, getting the lungs burning and the legs pumping. The kilometres ticked by as we rode short climbs and fast descents one after another through The Hartwood, Hydon Heath and Busbridge Woods before a road section taking us past Winkworth Arboretum towards Munstead.

From Munstead was our final descent of the day back down to join the River Wey and it certainly didn't disappoint, I find that the adrenaline rush is addictive and always worth the pain of the climb that takes you there. Back onto lower ground it started to rain and the last few miles alongside the river were scenic and leisurely as there were plenty of dog walkers and day hikers to avoid. 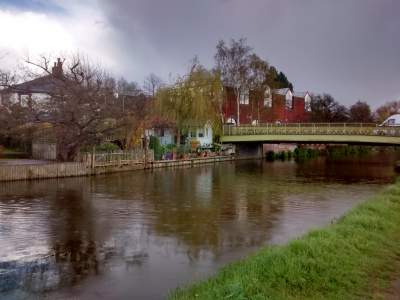 Arriving back into Guildford we stopped off at The Britannia for a post ride drink, sitting outside under cover from the rain to watch our bikes. Talks of bike parks, technical tips and discussions of bike mechanics flowed as easily as the beer and after two rather tasty pints of Spitfire Gold I checked my train times and rather hurriedly said my goodbyes and thanks to the group for a great day out. Having managed to make my train and be joined with a minute to spare by Alex and his bike, I was homeward bound. Another fantastic ride and social, I can't wait for the next one!