What a cracking day from start to finish! Waking up after a much better sleep to blue skies and sunshine is never a bad thing but then as I was cooking my porridge for breakfast I saw a little black and grey head bobbing up and down in the sea, I had a visitor, Mr Seal. Obviously it must be the same seal that I saw the previous evening and he'd now come to spy on me like I had been watching him. It was not even 9am and I was smiling like a sunbeam, an excellent start to the day. 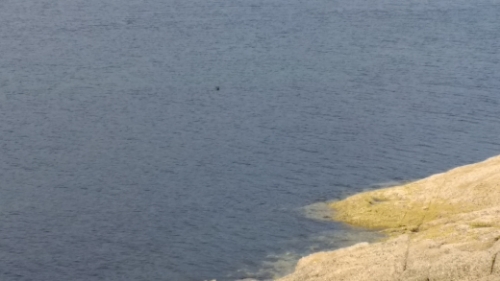 Today would be my last day on Bute as I needed to get a ferry from Rhubodach on the north east side of the island over to Colintraive in order to navigate some of the mainland lochs to make headway to my next island. 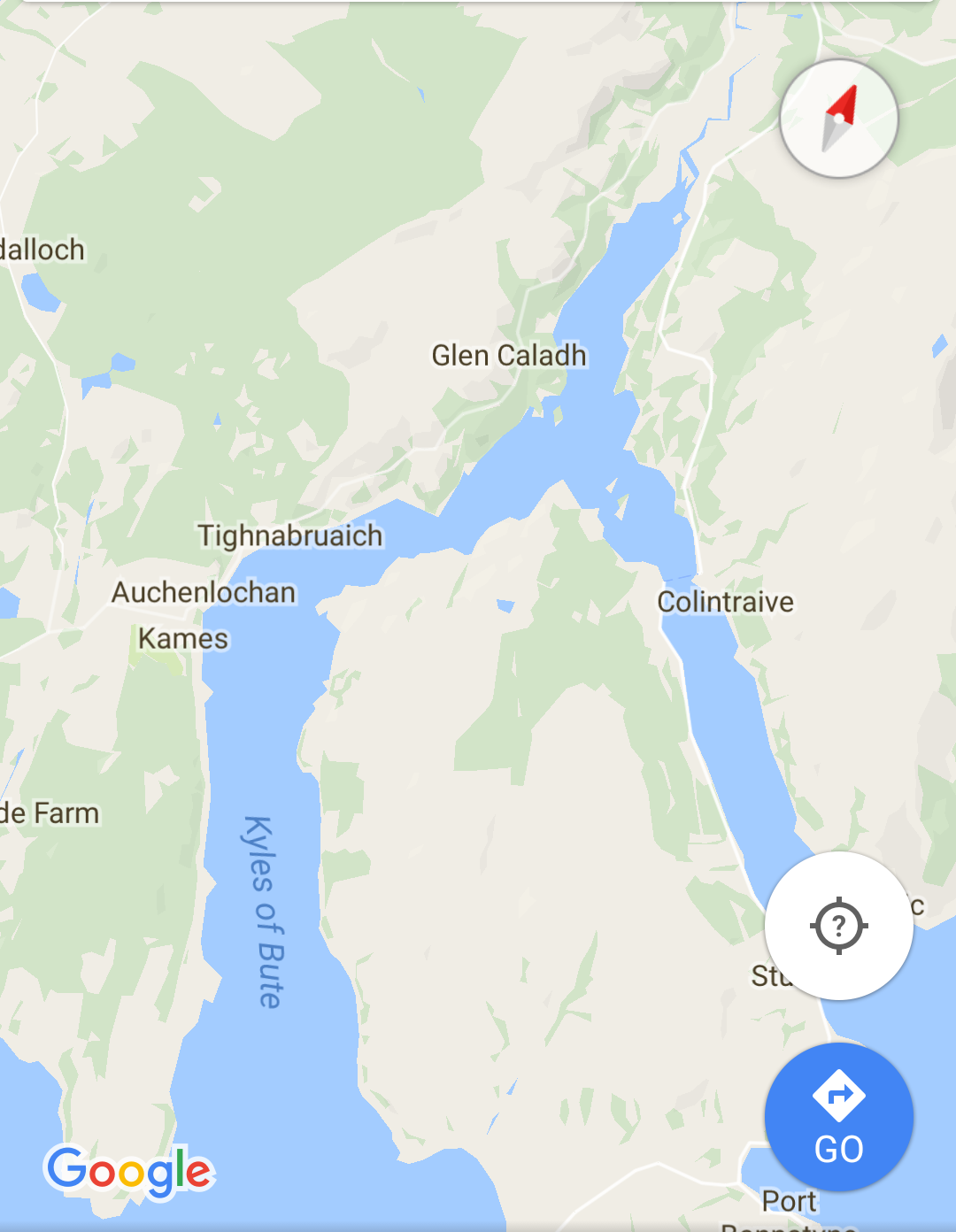 I made it to the ferry terminal with plenty of time for a snack before the ferry arrived. The crossing is one of Britains shortest sea crossings and for centuries cattle were expected to swim across. Thankfully bicycles are allowed to cross using the ferry these days. 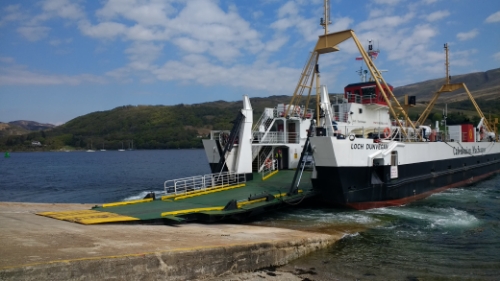 I headed north alongside Loch Ridden to Auchnagarron in order to cross the loch and then head south along the loch again to Tighnabruaiche. In my Cycling The Hebrides guidebook I'd already read that there was a rather long steep climb up and over to Tighnabruaiche but I was hoping that it wouldn't be too bad as I didn't fancy pushing a fully loaded Beast up a hill for miles.

This was my first real test of a long ascent and within minutes I was gasping and sweating in the hot sun, but before long I found my rhythm and was gaining height and had a nice view of the loch on my left. I always find that a bit of a view is great to take your mind off an endless uphill so that was indeed a bonus. Stopping frequently to regain my breath and take a drink I was feeling really happy. My legs were doing what they should, cranking out the miles uphill. Whether it was the haggis wrap I ate yesterday afternoon or the chocolate protein recovery drink I'm not sure but something had done the trick.

After a good 45 minutes I rounded a corner and could see the viewpoint, this was it, nearly there. The problem with seeing where you want to stop is that you still have to get there but sometimes your body says, ah there it is and decides to relax rather than finish the job in hand. The last few metres are always a struggle but I made it to the view point, propped my bike up and promptly plonked to the floor to recover.

A few minutes later I got up to see the view, wow! 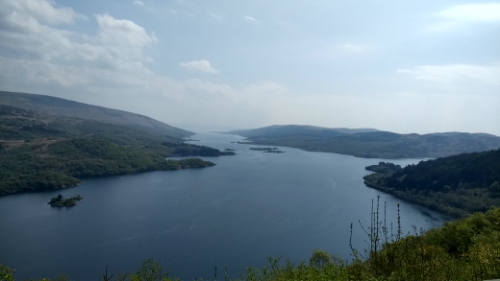 You could see all of the way down the Kyles of Bute to a very hazy Largs in the distance. I could see the ferry at Colintraive and it was such a feeling of achievement to get to the top. 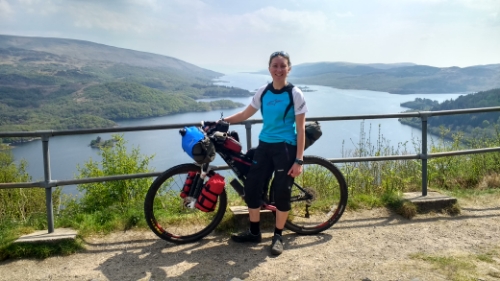 All of a sudden lots of cars pulled up and people got out to ooh and aah at the view. I sat down on the bench and got my lunch out, I was going to take a nice hour here so that I could enjoy the view I'd sweat for. There were two couples who'd arrived together in a car and I caught the eye of one of the guys and said hello. He was Canadian with a Scottish wife and they were with two of her family on a short break whilst they were over visiting. We chatted about the area and where we'd come from and were going to and they were in awe of my trip. It's amazing how many people react in this way, they say that they'd love to do something like that but... and there's the catch, there's always a but. I understand that not everyone can up sticks and leave on an adventure but I do believe that if you really want to do something then you'll find a way to do it somehow.

Anyhoo, I digress. It was fantastic to talk to people again and we said our goodbyes. I asked one of the motorbikers that were there if they'd take my picture and they did and then I said a quick hello to an older couple whilst packing up ready to head off again. You know what the best bit was? As I set off and started the fun freewheel down to Tighnabruaiche both the bikers and the couple waved at me as they went past. It's the little things in life that make you smile and today was just full of them.

I must say that the descent was delightful if not just for feeling the breeze as it really was hot without a cloud in the sky. Cycling onto Kames I stopped at the village store to grab a few more supplies. My plan was to cycle around the south of the island to find a wild camp spot for the evening but I had plenty of time and so stopped for a while to watch the world go by. 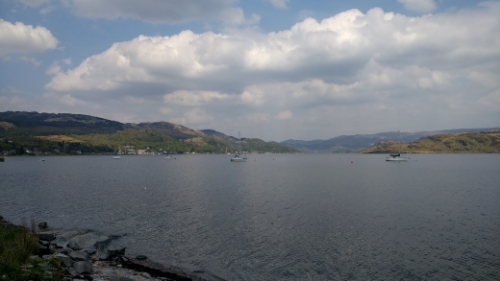 Riding down to Ardlamont Point there was a great spot for camping however on rounding the corner there were a herd of cows and so I continued on in the hope of finding somewhere near Kilbride Bay. The first path to take to the beach was fenced off and labelled private property and so I continued on to find the next farm where there should be an access road. Kilbride Farm was there on the left and rather wonderfully they had a cafe selling ice cream, boom, one more for the ice cream count!

It was a great setup, a large marquee in the garden with picnic tables selling everything - sandwiches, soup, ice cream, cake... there was only one thing on my mind though as I followed the printed instructions to go around the back of the house and shout hello to get served - ice cream.

What followed was a good half hour of enjoyable conversation with the lady whose name I never got round to asking. Her husband came home and joined in the chat and then her son arrived and it was really lovely. At one point I just had to open my pot of ice cream and dive in whilst we chatted because it was starting to melt. They asked where I was camping for the night and I said that I was going to scope out the beach and they kindly offered me a spot on their lawn if I changed my mind. Such a generous offer and one which I was tempted to accept but I had my heart set on the beach and so thanked them and said my goodbyes.

I'm now holed up in my little tent just behind the sand dunes of the most beautiful beach with views of the Isle of Arran. I had a little paddle earlier and just enjoyed having the whole place to myself, truly magical. 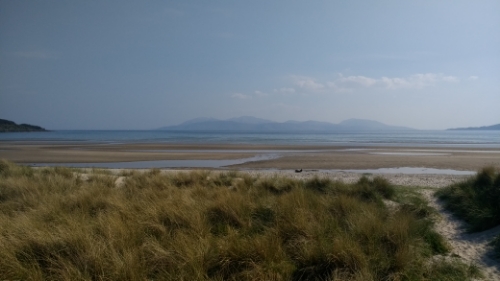 Another day gone and I'm happy to have experienced every minute of it. If I had a beer I'd toast to living evey day to the full but I don't so you'll just have to do it for me. Cheers. 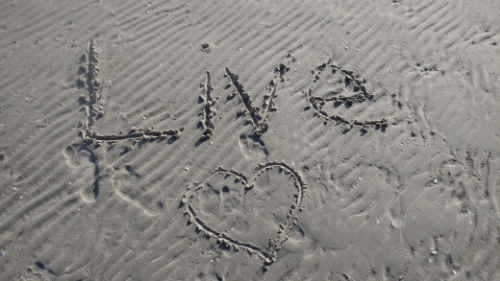