After a few rather long and heavy showers last night I was happy to feel the sun warming the tent this morning. I was up and ready to roll early and was glad of it as about 10 minutes into my ride the heavens opened and there was a heavy downpour, but at least it was just me that got wet and not the tent.

Todays plan was to ride from Scalpay back through Tarbert and along the road to Huisinis. It's a 14 mile stretch of road that goes to the west side of North Harris to a beautiful beach that has great views of Scarp island. According to my cycling book there was only one cafe at Aird Asaig and so I was going to get a cuppa there and top up my water. One thing I hadn't factored into my plans was that today was Sunday and I soon found out that nothing is open on a Sunday here, pretty old school right? Riding past the gallery cafe that is the only one in Aird Asaig I didn't quite know what to do. I could knock on somebody's door to ask for water but it was still early and it might not be the done thing on a Sunday either. Luckily a sign for a hotel caught my eye and I thought it was worth a shot to try my luck there for a brew. I wandered in to people still eating breakfast and asked for the owner. She appeared from the kitchen and I asked politely if she would serve me some tea even though I wasn't a guest at the hotel. She told me to go and wait in the conservatory and she'd bring it through. Ten minutes went by and to be honest I thought that she had forgotten but then she appeared with a big pot of tea and a slice of cake. 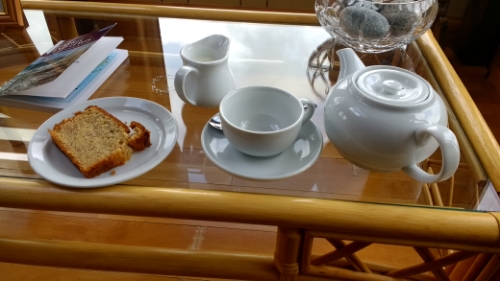 She asked me where I was headed and when I told her she explained that the road was very hilly. I told her that I knew and that I'd done the east coast ride from Leverburgh yesterday and she seemed to relax a little after that. Drinking my tea I managed to connect to the internet briefly and saw that there had been an attack on London the previous evening. I was shocked and saddened. Two attacks in two weeks whilst I'd been away, the world seems to be a dangerous place. I started to message my friends in London and luckily heard back from most of them. It's a strange feeling when you hear about something like this happening in your home city when you're away. You feel disconnected but at the same time worried for those you know that are there. Then the sadness of those that have been killed or hurt, truly awful.

I returned my teapot and cup and was allowed to fill my water up. Asking how much I owed her the owner refused to take payment saying that it was only tea and she was making some anyway. I explained that she'd given me cake too and she wouldn't take anything. What a lovely gesture and so I thanked her profusely and made my way out into the grey drizzle to start my ride. The cake was banana cake and was pretty darn tasty too!

I was looking forward to the ride today after the high of yesterdays ride and almost immediately I wasn't disappointed by the mammoth ascents that faced me. Yes it's tough going but mammoth ascents mean mammoth descents and I needed my hit of adrenaline. I turned a corner only to be faced with a grass tennis court right in the middle of nowhere, rather random... 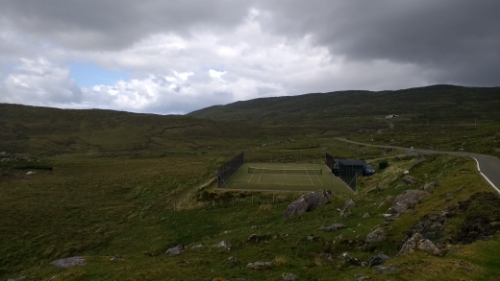 The ups and downs were similar to yesterday but my legs seemed to be managing although it was granny gear up every hill. The views were lovely and the sun appeared. 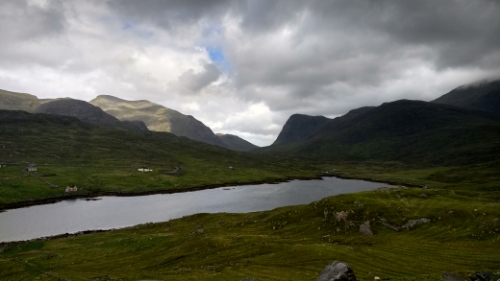 I have never been particularly fond of hills but this trip has definitely changed me. I feel the physical challenge quite addictive and it's so rewarding to finally crest the top and to see what is beyond. 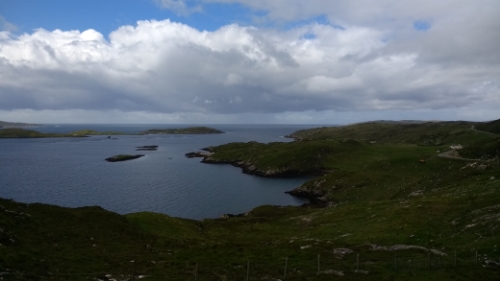 Before long I arrived at Amhuinnsuidhe Castle and the flash of colour from the pinky purple rhodedendrons was beautiful. The victorian castle looked sublime but it is privately owned and not open to visitors. 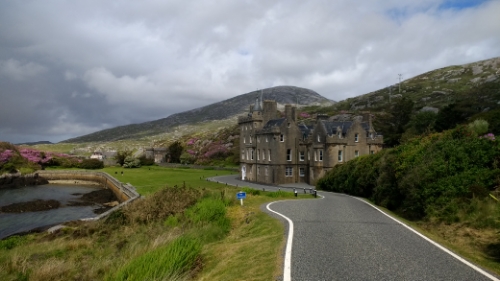 The sky was darkening again and it wasn't long before another heavy downpour. I could see the rain moving across the sky and decided to take a little breather to see the worst of it pass rather than riding into it. 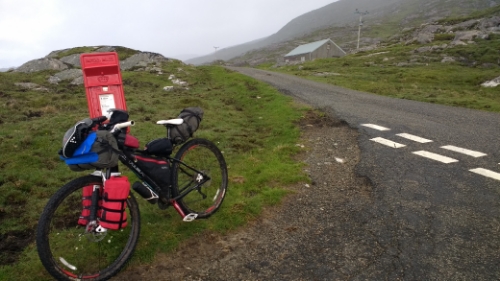 I knew I wasn't far now from the beach at Huisinis but like everything when you know it's coming, those last few hills were killers. Eventually I reached the top of the last hill and actually gasped when I saw the view. Turquoise seas and white sandy beaches again, wowzer, it gets me every time. Only a few highland cows to navigate and I'd be zooming my way to Traigh Huisinis beach. 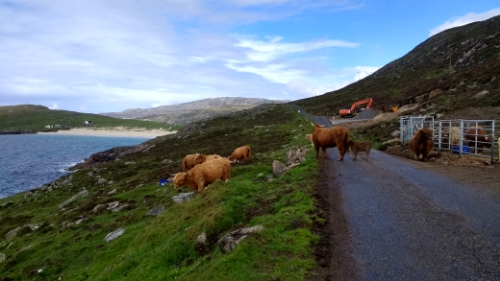 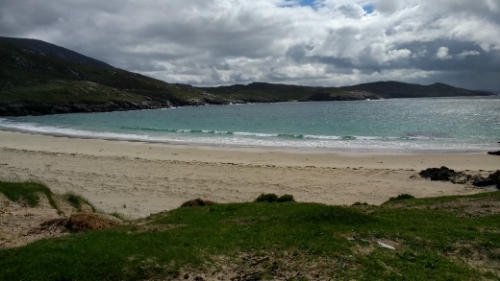 Following the signs to the car park took me along a sandy path. I stopped the bike and fiddled with my phone to take a picture but I was on a slope and couldn't stop the bike moving forward as I was off balance and so before I knew it the teeth of the front chainring had dug into the back of my calf and I couldn't stop it. Bugger! I could feel the blood trickling down my leg as I pushed the bike to a safer place to find the first aid kit. Sitting down I could see that it was worse than I thought. The teeth had punctured the skin and obviously they're not clean, they're covered in oil, grit and god knows what else. 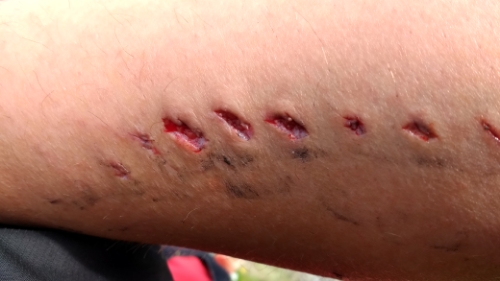 The wounds were dirty and so I tried as best I could to clean them with the antiseptic wipes but I couldn't get the deeper dirt out. Rummaging around in the first aid kit I couldn't find the large dressings that I thought I'd brought and so made do with some smaller dressings and a lot of tape. 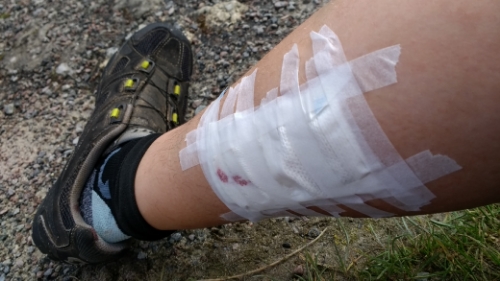 At least the view from the pier over to Scarp took my mind off it whilst I ate lunch. 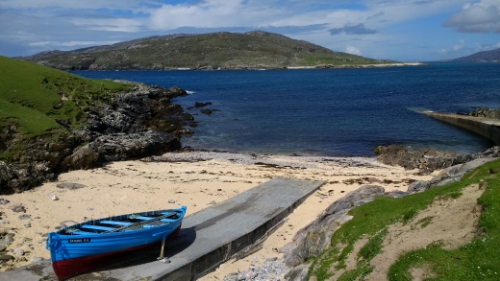 Medical bodge job done I had 14 miles back along this road and then maybe another 8 or so to the hostel in Rhenigadale where I could hopefully raid a larger first aid kit.

Starting the ride back I could see that the weather was turning and that it could be a wet afternoon. Also the wind had changed and so I was riding back into a headwind which coupled with the rain when it came was pretty harsh. 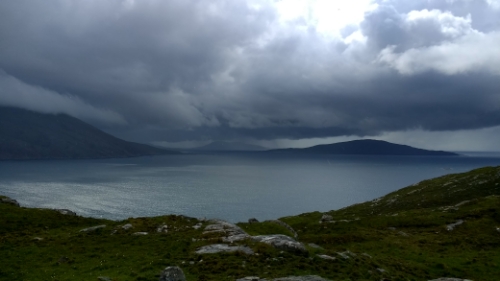 My leg was starting to sting a bit but it wasn't stopping me from riding, I think my legs were just tiring a bit and so the hills became harder. This was definitely a physical and mental challenge riding back the same route and knowing how far it was to where I started. I decided that a bit of music was all I needed and so hit play and sang along. I couldn't help but laugh when Eurythmics 'Here comes the rain again' song came on and the heavens opened. Then straight after that song was 'It's raining men' and I seriously lost it then. It was like the MP3 player knew something I didn't.

Finally reaching the end of the road I'd started at I was rather wet and looking forward to getting to the hostel. The road ahead was steep and long and for the next few miles I got wet and tired. I was so excited when I saw the turn off for Rhenigadale and a nice sweeping downhill. The sign said 6 km to the hostel, not too bad. Flying down the hill I could hardly see for the spray off the road and from being pelted in the face by the rain. It was like having small stones hitting your face! My joy turned to despair when I saw what was at the bottom, a huge hill. I was about to have a sense of humour failure and was soaked through and it was still raining. My legs seemed to have lost the will to pedal and all I was doing was going around 10 metres to the next rock to stop and then the next 10 metres. I had nearly had enough. 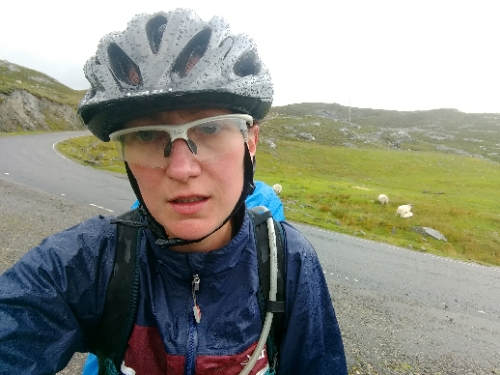 Those last few miles were long and torturous at times but you know how it ends. I got to the top of the hill and went down the other side in minutes, praying that the hostel was at the end of the road. Pulling up to the hostel, the sun came out and it was blue skies.... what the &*%$. 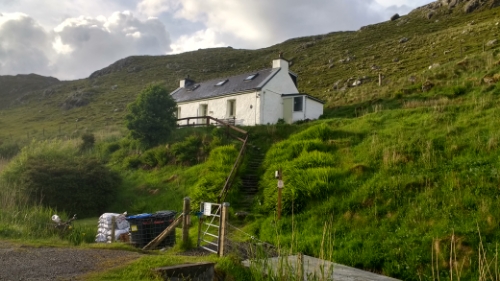 Walking in like a drowned rat a guy opened the door and said hello. He was the only one staying here and he knew the ropes. He started the stove so that I could dry my clothes and showed me how to use the shower and put a pot of tea on the go, amazing.

Till was from Germany and he comes here every year for a couple of weeks. Ben, a cyclist turned up a bit later and we had a lovely evening, made even better by a wee dram of 10 year old Talisker from Till. A testing day but alls well that ends well. Great company and dry clothes for the morning, life is good!