What an absolutely cracking day's cycling today. I'm sitting in the tent and it's chucking it down but even with a damp end to the day I'm still smiling!

Waking to blue skies after a long awaited good nights sleep I packed up and headed back to Leverburgh ferry terminal to grab a cuppa and get some water. The plan for the day was to tackle the east coast road to Tarbert which the cycling book warned was hilly and graded as hard. Ready for the challenge I hit the road and immediately faced a long climb up Gleann Shranndabhal. 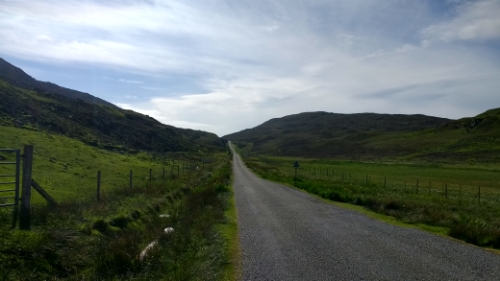 It'd been a while since my hill legs had been called upon and it was a nice way to warm up the knees. The 3 miles to Roghadal were just a peek of what was to come today and I stopped there to have a look inside St Clements Church. 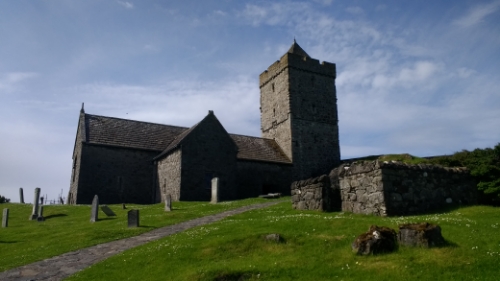 It was built in 1520 by the MacLeod clan chiefs as their burial place. The inside was simple with stone walls and floors and simple little windows, very nice. 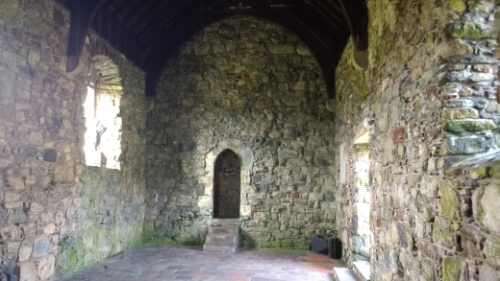 It also houses the tomb of Alasdair MacLeod which is covered in intricate carvings. 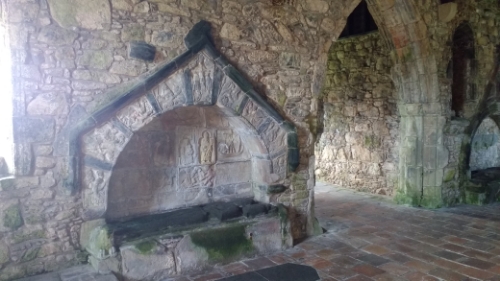 Culture done for the day I returned to my trusty steed and hit the road again. The next few hours were pure joy. Mountains and rocky hills as far as the eye could see on my left and to the right gorgeous rocky bays. 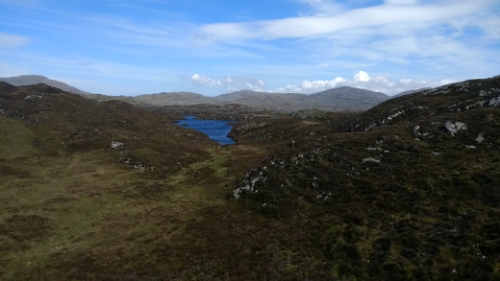 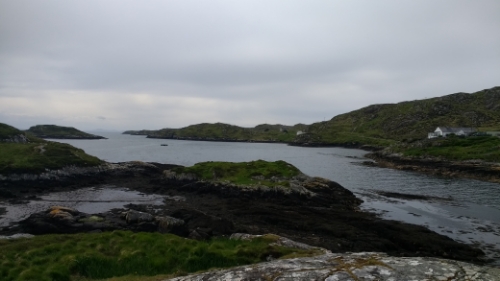 At the top of every hill it was a surprise as to what was next and those long winding descents were pure joy. Monkey who is now very firmly attached to the bike was headfirst on the handlebars, such an adrenaline monkey!

I love days like today. Days where you're challenged physically but rewarded by amazing scenery and sometimes it felt like I had the whole place to myself. I only saw 3 other cyclists in the whole 30 miles and not too many cars and campervans. I couldn't help but squeal riding down some of the hills, it was just so much fun. 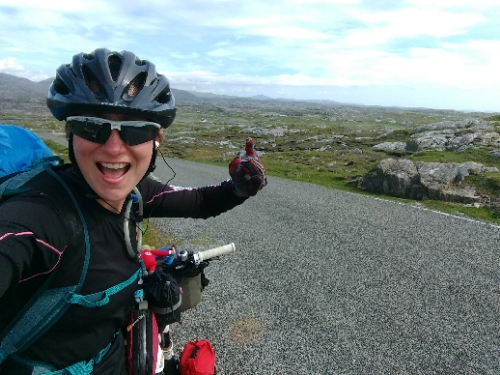 Finding an art gallery with a cafe at Geocrab I stopped for a well earned pot of tea. It's always hard getting started again after a break but I soon got back into the swing of it and continued north. I wasn't far from the section known as the Golden Road. I was reliably informed by the man in the Butty Bus this morning that the whole east coast road is often incorrectly referred to as the Golden Road when in fact it is only a small part around the north east coast that is the real Golden Road. It was named so because of the cost involved in building it in the 1930's.

I was happily pedalling along when all of a sudden there was no resistance on the chain.I figured that it had just slipped off the smallest cog but to my surprise when I looked down the chain had snapped. I've never had a chain snap on me before and had only put this one on a few days ago so maybe I hadn't pushed the pin far enough in and it had caught on something. 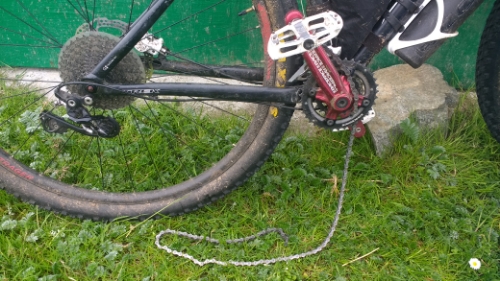 Time for my first test of mechanical knowledge. I had a quick link to fix it but to be honest I'd never used one before so I was fiddling around with it and trying to get it sorted when a man pulled up on a scooter asking if everything was ok. I explained that my chain had snapped and that I was trying to fit a quick link and he had a look at it and helped me to get it attached. I would have gotten there myself in the end but it was nice of him to stop and help. Maybe this whole damsel in distress thing could work quite well for me, haha! 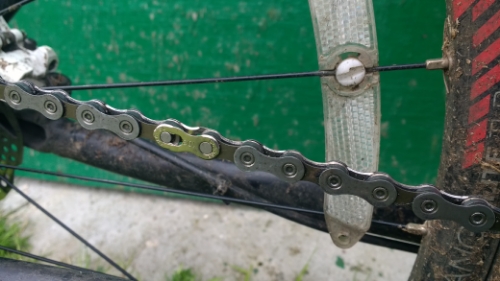 Chain fixed it was onward and upwards and back to enjoying the ride. I stopped at a little jetty for a choccy biccy (or 2) and just sat for a while listening to the swish and slosh of the water. So quiet and peaceful. 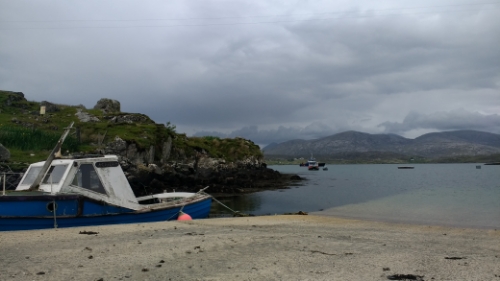 It wasn't long before I turned off onto the main road to Tarbert and could see the town below me. 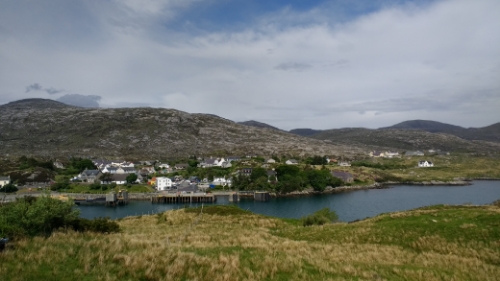 One last full speed freewheel down the hill and I cruised right up to the Hebridean Hotel. I was ready for a pint and boy did it taste good. 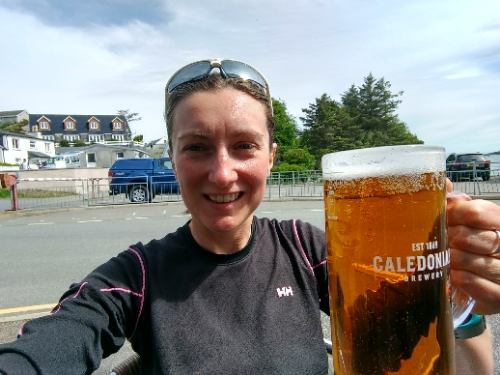 I sat chatting to another cyclist who had the same idea, he was 72 and was cycling up to Stornaway. I hope I'm still cycling at that age!

I could have sat and had another pint but I still had some miles to pedal to get to my destination for the day and so sadly left the pub and headed east for Scalpay. It is joined to the mainland by a bridge that replaced the ferry in 1996 and is full of sea lochs which are perfect for fishing.

It hadn't looked that far on the map but it was 7 miles of hills again and my little legs were screaming for a rest by the end. I resorted to shouting myself to the top of the hills and then freewheeling the downhills. Finally crossing the bridge and stopping at the only shop on the island I was ready to buy a couple of bottles of beer to go with my dinner and so was devastated when the shop didn't have any alcohol. I asked when the adjoining bistro would open so that I could get a drink in the bar and the lady in the shop informed me that they didn't sell alcohol either, it was bring your own bottle. I don't understand some of these islands, what on earth do people do without pubs and shops that sell beer??? The outer hebrides has been the hardest place to find a nice pint when you need it. In my desperation I convinced myself that two cans of Bass Shandy would be just as good as it was the only thing resembling alcohol and I headed off to find a camp spot for the night.

The sky had darkened and the clouds threatened rain as I scoped out a camp spot. Moving swiftly to get the tent up I had just finished and grabbed my bags when the heavens opened. I was now glad I hadn't stayed for another pint as I would've gotten soaked and have to put a tent up in the rain. Finally a bit of good timing! 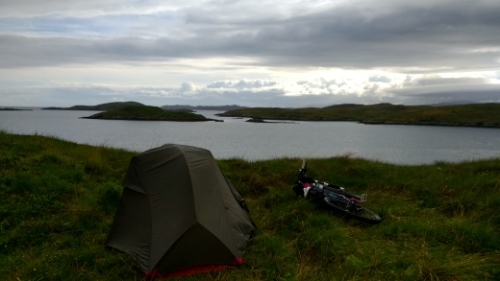 So all in all a fantastic day. Let's hope there are more to come!

PS. Shandy does not resemble anything like alcohol ☹️