Another week and another midweek adventure with a kayak up the canal courtesy of Secret Adventures. I met my mate Tim at Limehouse at 6:30pm and after a quick intro we were kitted out with lifejackets and headed down with another 20 people to get into the double kayaks and onto the canal. 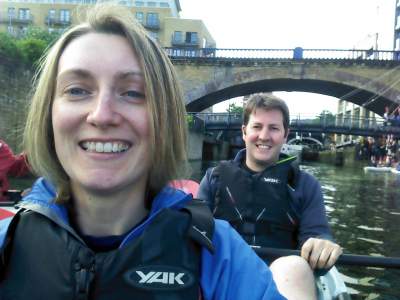 We headed off at our own pace and soon got into a rhythm of paddling as we cruised along the water. It was pretty soothing just slicing through the water and passing an array of different boats moored alongside the tow-path.

Chatting along the way we passed ducks, swans and moor hens with their nests and young on the waterside. It's a bloody good workout for the shoulders and we were both feeling our efforts after the first few kilometres. Being a massive cycling fan I find a lot of satisfaction in self powered transport and kayaking fits nicely into that category.

We were bound for Crate Brewery in Hackney and the scenery was pretty varied along the way from modern tower blocks to industrial buildings. We passed close to the 2012 Olympic area with a view of the Orbit. 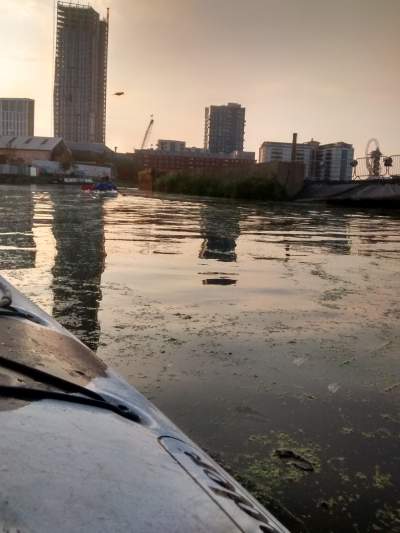 After close to 6km we came to a lock which was the last hurdle before our destination and we waited for the others to arrive.

I've been in a lock in a canal boat years ago but being in a kayak was a whole different ballgame and rather scary once the water really started flowing and rising. We all grasped the boats next to us to create one large floating kayak-fest however the water bubbling up was a bit too much for our position and typically myself and Tim ended up with the water flowing over the side of our kayak soaking us from the bottom up! Never mind, they did warn us to bring a change of clothes, can't believe that we were the only ones to get wet though...

After the lock it was a very short paddle to the brewery and we got out, changed into some dry clothes and headed for the boat to sample the beers and pizza. Between us we sampled the IPA, lager, golden ale, pale ale, stout and wheat beer plus a lamb pizza and a salami pizza - and all was very satisfactory!

Given the chance I'd definitely do it again - I mean who wants to sit on a sofa after work watching TV when you can be out in the fresh evening air getting a bit of exercise and sampling Hackney's finest craft beer?

Time to get online to find my next midweek mission....