Today has been the best and worst of days. At 9:30am I was at the Kilt Rock viewpoint enjoying the incredible rock formations along the cliffs. Not bad for a Monday morning! 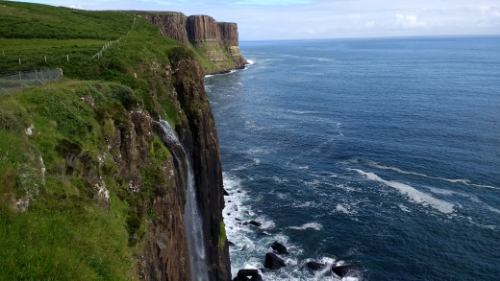 Heading into Staffin I resupplied at the shop and had my morning pot of tea in the Columba cafe. Todays mission was to head to the Quiraing, a distinctive landslip on the eastern face of Meall na Suiramach on the Trotternish peninsula. Having not read much about it I was determined not to make the same crazy mistake that I did riding up the track to the Old Man of Storr and so I asked the cafe staff if it was possible to ride along the Quiraing. The answer was a resounding no although slightly disappointed I felt a bit more prepared.

The climb started immediately after turning off the main road with a rather daunting incline in the distance. 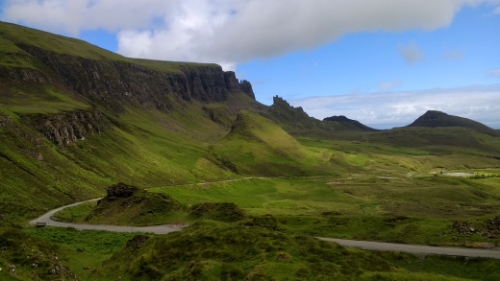 The views did at least focus my mind away from the pain of the ascent but it was a tough slog up to the car park. I parked The Beast and headed out along the track. It was a lovely day and the crisp green of the hillsides reminded me of the landscapes of Iceland. 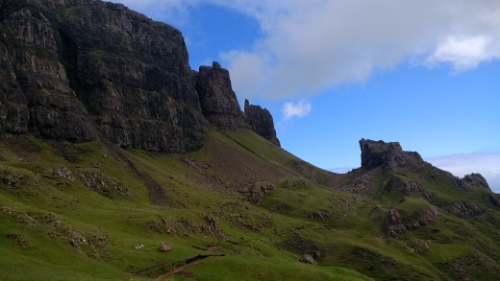 Walking along the narrow track I was happy to take in the amazing views. It was a refreshing change to hike and chatting to couple along the way they informed me that the walk was a 10km loop. On the OS map it was just one straight track but I'd started and so continued to enjoy the fantastic views and rocky vistas. 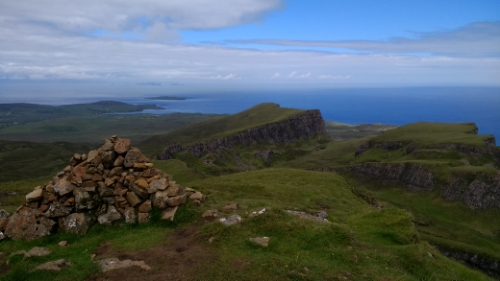 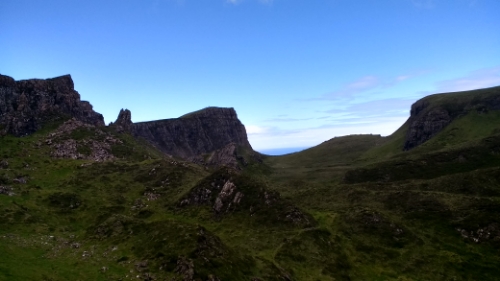 I was just totally in my element on the walk. Everything was so dramatic and green and reaching a fantastic viewpoint I was buzzing with excitement and just feeling happy to be outside and alive. 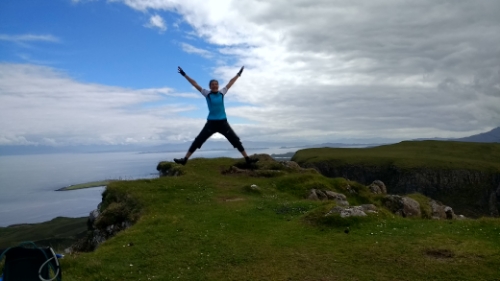 I sat and ate lunch before making my way up and over the top of the Quiraing. The track was rather non existant here and what started out as a bit of a muddy trail became a horrible boggy slippery mudfest on the way down the other side to the car park. Usually it wouldn't be a problem for me but the grip on my bike shoes wasn't great and so more than once I ended up on my bum in the mud.

Finally reaching the car park I was glad to be on terra firma again as the downhill had really been rough on the knees. The road back down to the main road was an exhilirating ride and I continued north around the coast towards the hotel at Flodigarry for a well earned pint. 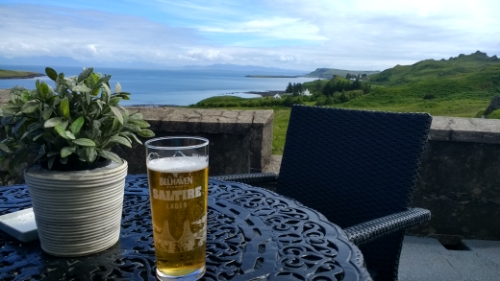 My destination for the night was the Lookout bothy at Rubha Hunnish. It is on the far north of the peninsula and used to be a coastguard watch station before being taken over by the MBA in 2006. There is no water there and so I stopped at the suggested art gallery on my way to fill up only to find it closed. I would have to ask at a house and so continued down the road to a large white house. Two people appeared from the other side of the house just as I pulled up and I asked if I could trouble them for some water. After a quick chat and water refill I was back on the road and turned off on the track for the bothy. 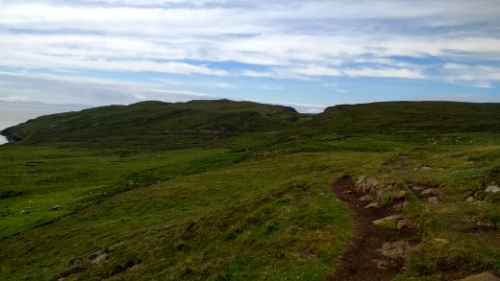 I could see the tiny little hut in the distance as I rode along the track and was looking forward to spending the evening watching out for whales and dolphins as it was a lovely clear night. Unluckily for me it wasn't to be as I managed to lose my balance along the trail and both me and the Beast toppled leftwards down a hill. Putting out my foot to try and break the fall I went right over on my ankle and rolled down the hill. The pain was immediate and intense and I knew that it was serious. Rolling around holding my ankle I waited for the searing pain to pass. Five minutes of cursing later I knew I had to try and move to get back to the path.

Putting weight on my ankle caused me to cry out and I knew then that this could be pretty serious. In a slight panic I realised that I still had phone signal and so rang my friend Barry for some advice. Explaining what I'd done I asked him what I should do. Just hearing someone elses opinion right then was all I needed to calm me down a bit. Hanging up I decided to try and get back to the road where I could freewheel back to the house I'd been to earlier for water so that I could ask them for some ice. Looking at my ankle I was alarmed to see a huge egg shaped lump had formed and this increased my worry that I'd really hurt myself. After a bit of hobbling I saw two people walking towards me and asked for their help. They were a belgian couple and they very kindly pushed my bike back to the easy part of the track just shy of the road for me and I insisted that they continue on their hike to the bothy.

Rolling down the hill to the house I hoped that the couple were still around. I saw the man in the shed stirring paint and explained that I'd come off my bike and would he have some ice please to help my ankle. He helped me to a bench and went inside to fetch some cold water for me to put my foot in and when I removed my shoe and sock he gasped at the size of the lump. Asking his wife for some ice packs we finally got round to some introductions. Andy and Janet were fixing up the coastguards cottages and had been painting all day when I had arrived and they were fantastic in helping me out. Janet gave me a cup of sweet tea and chocolate biscuits whilst Andy chatted to me and made sure that I had cold water for my ankle. I have to admit that it looked pretty nasty at this point but I have no photos as it was the last thing on my mind. After a while of chatting I asked them if they would mind me camping on their lawn so that I could rest my ankle and they immediately agreed. It was getting a bit cool and so they invited me into their home, moved my bike around the house, started a fire and gave me a cup of Talisker laced tea. I cannot begin to tell you how much I appreciated their help, kindness and generosity. The adrenaline had worn off now and the pain was surfacing. 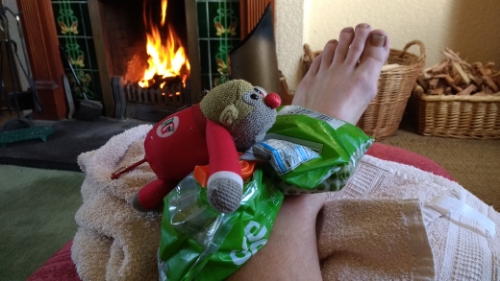 Having rested a while Janet came out to help me get the tent up and before I knew it I was offered a bed for the night. It was a difficult situation as I knew that these people had already been so kind and I didn't want to put them out but I also knew that my night would be much more comfortable in a bed and so gratefully accepted.

The evening went by in a blur. I was sat with my foot elevated and iced, ate a wonderful meal, was given a beer and more Talisker tea and was totally overcome with gratitude. Andy and Janet were lovely people and the conversation flowed easily. There are people in life who you just get on with and I felt as ease in their home. We talked until nearly midnight when we retired to bed.

Lying in a bed in what was effectively a strangers home I felt many emotions. Trying to process the last few hours of the day kept my mind whirring for a good hour or so. In the society I live in in London this would never have happened. Taking a stranger into your home just wouldn't happen as people have lost the ability to trust others. I felt so incredibly lucky to have come across such kind and genuine people. It is something that I will remember for the rest of my life and it is heart warming to know that there are people who are so willing to help others.

Nodding off to sleep I kept my fingers crossed that my ankle would look better in the morning.