I left the hostel this morning full of anticipation of a day of adventure. I was attempting to get to Uisinis bothy on the east coast of South Uist.

It was a lovely ride out to Loch Sgioport, the sun was out and there was only a light wind. 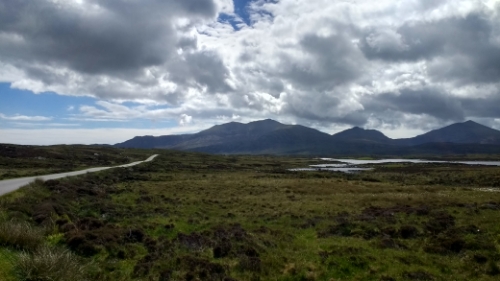 There was a gravel track to start with that led to some deserted buildings but after that I would be navigating across heather and bogland until I reached Rubha Roiseal. 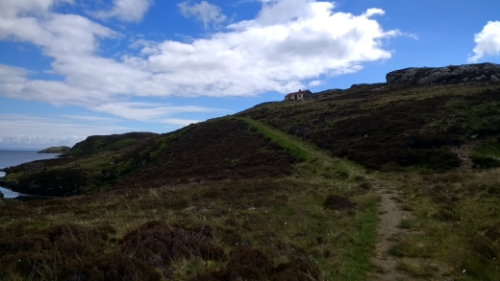 From there I would have to follow the coast south until reaching the path that goes out to the lighthouse and from there head south again across land to Bagh Uisinis where the bothy was. The Bothy Bible book had said it was challenging and would take 3-4 hours. I reckoned on around 6 hours with the bike and to be honest from what I'd head in the hostel last night it would be very likely that I wouldn't make it. You never know until you try though and I'm not one who is put off by these things so I was going to see how I got on, I could always turn back or wild camp somewhere if I couldn't make it to the bothy.

Immediately after the track ended it was hard going. Riding was impossible and pushing the bike through boggy grass was the way. The thing was that it looked like solid ground until you stepped on it and sunk. Ten minutes in and my feet were soaked but the views were beautiful. 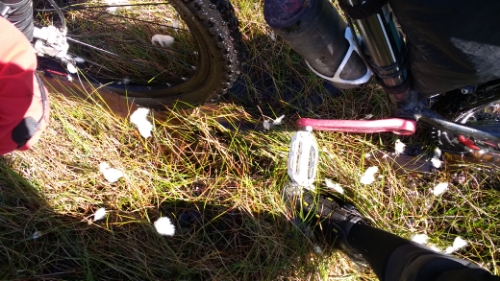 After passing Loch nam Faoileann and crossing a stream it was a push up to higher ground. I know my bike is heavy but man it was tough as this was steep. The heather was so thick it was difficult to get through. Reaching the top I wanted to check that I was heading in the right direction and so put my bike down and headed up to the summit in the distance. It turned out to be a false summit and so I kept walking towards the next summit as I expected that there would be a loch at the end of it and I didn't want to heave the bike all of the way up only to find that I wasn't going in the right direction. This turned out to be the biggest mistake because on reaching the edge and seeing the loch I turned around and tried to retrace my steps. You can probably guess what happened next, yes, I lost the bike. I knew as soon as I turned around that I'd made a fatal mistake. My first thought was remembering a story my friend Barry had told me about how him and his mate had left their bikes to check out the way only to lose them and spend an hour trying to find them again. Well I took 45 minutes and even asked a couple of walkers who'd come across the stream if they'd seen a bike - I think they thought I had a screw loose! 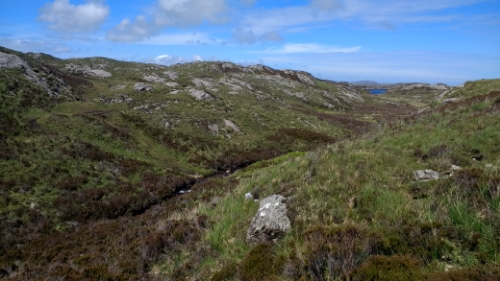 It was a tough lesson to learn but a vital one and I was kicking myself for being so stupid when every bit of heather and stone all looks the same. After a spot of lunch to refuel I checked the map and wasn't quite sure where the next loch was that I had to walk around. All I could see where mountains and I thought I had to skirt around them to the east but they looked rather steep. 30 minutes of hauling the bike later I stopped to take stock. I'd left the road at 11:30am and it was now 2pm. Yes I screwed up and had wasted time losing and finding my bike but this was just ridiculous, I would never make it to the bothy at this rate. The ground was just too rough and the wind had really picked up and so I was walking into a headwind. Hiking would be doable but pushing a very heavily laden bike wasn't going to work. I decided to turn back and to head north, at least I had tried and I still had to get back to the road so that might take another hour or so. 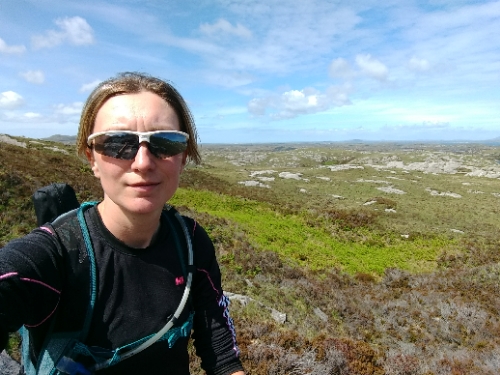 I managed to find the point where I crossed the stream and worked my way back from there. By this time my shoulders and arms were screaming from the effort of pushing the bike up hills. My relief at seeing the deserted buildings that I'd passed earlier was immense. However I decided rather stupidly to try and ride down some rocky hillside and ended up off the bike and in the heather. Nothing damaged but a silly thing to try at this point. Finally reaching the road again it was 3pm and I was just happy to be back on terra firma.

I wandered down to the pier with the intention of having a half hour break before continuing north and met a guy called Alan who had just been watching an otter down there. We chatted for a bit as he was staying at Howmore hostel this evening and I mentioned that I had been there last night. It turned out to be really quite chilly and windy on the pier and so I turned around and decided just to get back on the bike. It wasn't long before I caught up with Alan and we rode the 4 miles back to the main road together which was great, it was so nice to ride with someone else. 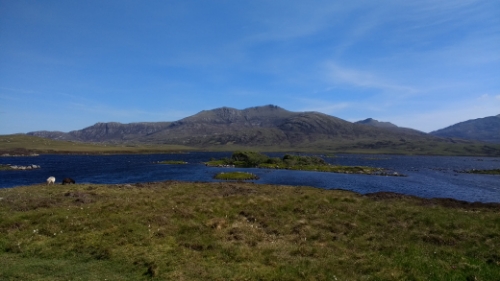 I've been finding myself feeling a bit off these last few days. I think the toll of being alone on my trip is starting to catch up with me. I'm used to being alone as I live alone but it's different to be by yourself for a whole month without seeing anyone that you know. The daily encounters with walkers and cyclists are great but I find myself craving the company of someone that I know and can have a conversation with that isn't about my trip.

Leaving Alan I headed north and decided to keep going until I reached Benbecula over the causeway. I'd had enough of South Uist and the remote strange scenery. Stopping to grab some supplies when I saw a local supermarket I was feeling rather positive about being in a new place soon. Stockpiling done I took my backpack off to try and find space for all of my new purchases and immediately I could see that Monkey wasn't there. My heart pounded and I panicked, ripping my jacket out of the front pouch to see if he had slipped down. No, he was gone! I felt like I'd been punched in the chest. I had my hands over my face saying, no, no, no. I couldn't have lost Monkey! I had because he wasn't in the bag. I had been checking for his red arm hanging out from the backpack but it turned out that what I'd seen was actually part of my jacket which was also red. Suddenly I thought about my fall from the bike, I'd landed on my backpack and maybe he had fallen out then. I had to go back, I couldn't just leave him, I didn't want to leave him, he was my only companion, my bestie and had been with me the whole way. Now most people might think that I'm an absolute loon for what I did next but if you were in my situation you might think differently.

I turned around and rode into the every increasing headwind. It was 9 miles back to Loch Siogport and from there I dumped the bike and walked the 2km back to the deserted buildings where I'd come off the bike. All the way I was muttering please, please, please let me find him. I reached the place where I fell and there was nothing. I kept expecting to see a flash of his red suit but it was just brown heather and nothing else. My heart sank, I really thought I'd find him. If he wasn't here then he could be anywhere from where I'd wandered since lunchtime as that was the last time I saw him when I took my backpack off. Feeling devastated I walked back through the piece of bog on the right hand side like I had with the bike and headed back down the hill. Red ,a flash of red! I ran squelching through the bog, oh my god it's Monkey, he's there, he's right there. I picked him up and hugged and kissed him and couldn't believe it. He was just off the rough track and I cannot describe how amazing that moment was to find him. From the reality that he was gone forever to finding him was about 30 seconds and the smile on my face couldn't have been bigger. 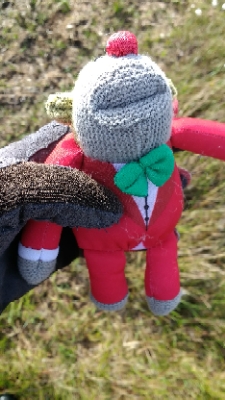 It was now 6pm and I was pretty exhausted. I decided to head back the few miles to Howmore to spend another night in the hostel and head north tomorrow. I zipped Monkey into the backpack and told him that it was only until we could find a way to make him more secure. Half an hour later I was back at the hostel. I never imagined I'd be back here 36 miles later when I left this morning but then that's the beauty of this trip, I don't have to be in any certain place at any time.

Today was a very testing day. Emotionally it was tough, first deciding to turn back from the trip to the bothy and then secondly to lose monkey, turn around and cycle 9 miles into a headwind to try and find him. Totally worth it though, I'd got my best pal back and I'm sat in a hostel with a wee dram of whisky from a man called Ian who was born here in South Uist. Purely medicinal of course to help soothe my aching muscles, haha.