After a nice sheltered night by the community centre I was up and packed just before 8am. Today is the day that I leave my final island and get the ferry back to Oban on the mainland and so to celebrate I have clean cycle shorts and a clean top! After a shower last night I feel like a new woman, woohooo!

The ferry leaves Coll at 9:30am and goes to Tiree then back to Coll and then over to Oban however a few of us decide to get the early ferry because the Tiree Music Festival finished yesterday and so a whole hoard of hungover youngsters will be bombarding the ferry at Tiree and this way we get a seat no problem. I'm met at the ferry by the two guys from the pub last night, Kenny and John I think are their names and then Hayley and Michael the two cyclists. One final photo of me, The Beast and Monkey and I say farewell to Coll. 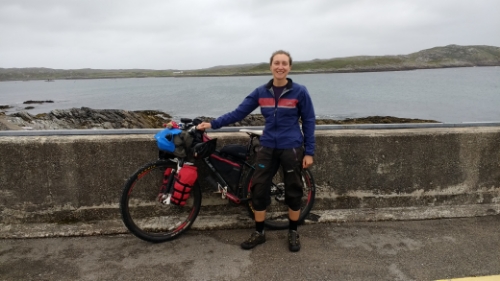 It will be a long day and so I treat myself to some real food - a bacon and sausage bap, oh how wonderful it tastes. I even splash out on a magazine to see my through until we're meant to arrive in Oban at 3:30pm. Time to sit back, relax and watch the sea.

I'm really glad to have gotten the early ferry as we dock in Tiree. The guy in the coffee cabin tells me that about 600 people are due to board and before long the boat is heaving with bleary eyed people who lie all over the floor trying to sleep.

Leaving slightly later than scheduled the rest of the afternoon ticks over slowly. The weather improves as we near the mainland and before long it's a blue sky and sunshine day. I start to get antsy and want to be out on the bike. It feels like a waste to be sitting on a ferry with such amazing weather outside. 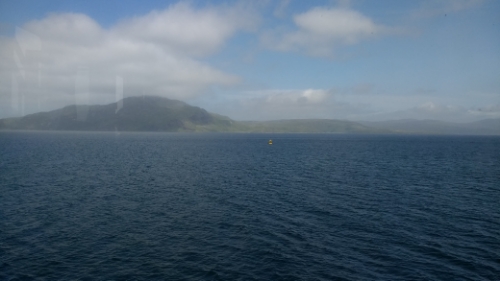 Arriving in Oban just after 4pm I say my goodbyes to Kenny and John and get a few bits and bobs from the shop. Time to get back on the road and start the next part of my adventure, the miles back to Sunderland.

Taking a quiet back road to Collen I'm confronted with my first hill but once I'm out of Oban the views start to appear. 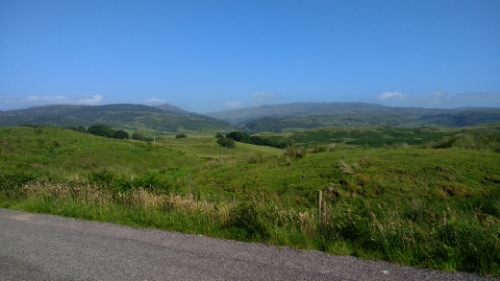 Mountains and sunshine, what a killer combo as I smile up the hills. I plan to go as far as I can towards Tyndrum today and joining the busy A85 at Collen it's a different type of riding. The views of the lochs are stunning but it's a busy road with fast traffic and so I have to concentrate and be aware constantly.

A brief stop for a cold drink is much appreciated in a petrol station reminiscent of something from America. 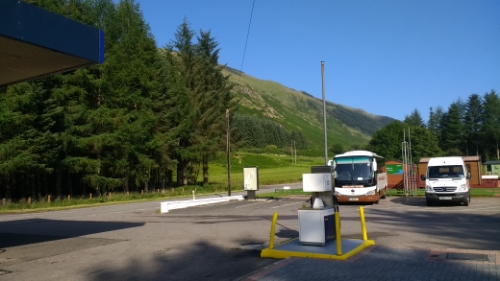 Chatting to the guy in the shop I ask him what there is at Dalmally. There's two hotels and that is good enough for me, I decide there an then to cycle there, have a pint and then camp for the night.

It's a glorious evening as I pull up to the Glenorchy Lodge bar and I savour the glorious taste of an ice cold pint of lager. 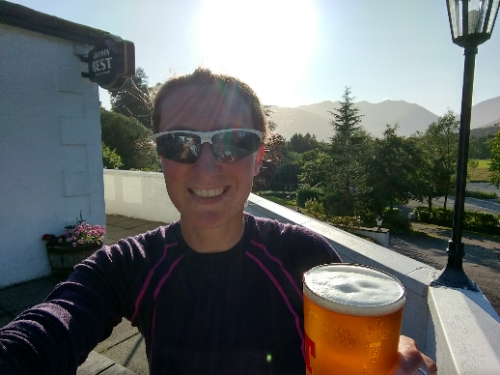 Not a bad view either and there is a guy practicing on the bagpipes as tomorrow is the highland games in Inverary and the barman tells me that the piper needs some last minute practice. In the last 12 weeks this is only the second piper I've heard and I truly feel like I'm back on the mainland now. I think bagpipes are a bit like marmite, you either love them or hate them and I'm definitely in the love camp!

A pint later and I buy a bottle to take out for dessert. Finding a nice spot just by the river I setup camp and am plagued by midges. 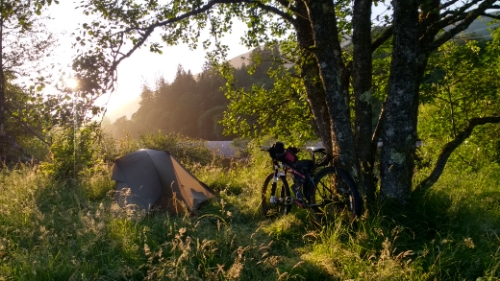 I don't care anymore. The sun is dipping behind the hills and it's a beautiful evening. Taking a deep breathe I sigh and close my eyes and smile - a happy cycling chappy I am!