It's Wednesday today and we were sat in a cafe just after 9am waking up with a big pot of tea. We're headed west from Liurbost to Mangersta today via Great Berneray and hoping that the wind is at least in our favour for some of the ride after yesterdays soul destroying 30 miles.

It's overcast and windy but not raining which is a positive as we mount the bikes and head west. 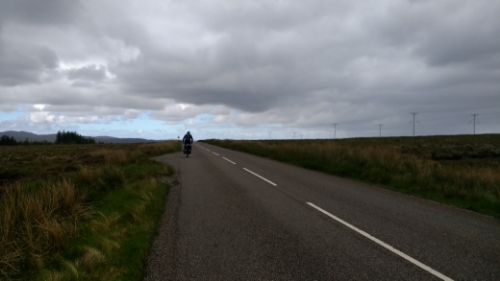 It's a busy main road that goes to the Callanish stones and so I'm glad when we turn off to go south. It's tough going and it seems that every mile is a long one. I've found it quite difficult to judge distances from the map on Lewis and today is no exception as the causeway to Great Berneray takes an absolute age to come into sight. On the plus side Ben has seen his first seal, woop! 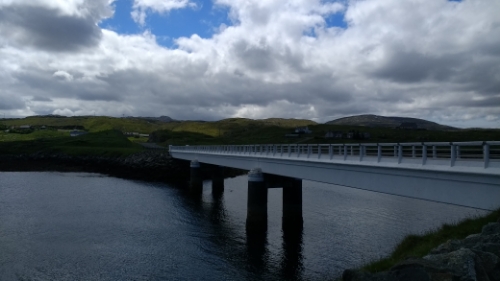 Crossing over to another island we check out the map to see where the cafe is as we're riding into a headwind again. It's only a few miles and before we know it we're sat eating cake and drinking tea and the sun is shining outside, a welcome stop! 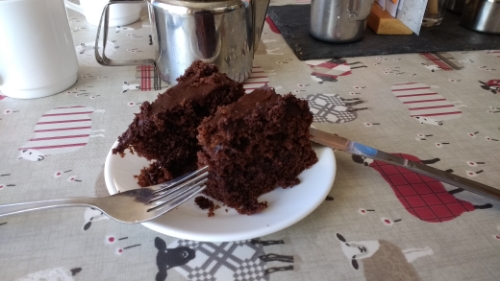 Refreshed and ready to conquer the last few miles to Bosta beach at the end of the island every corner seems to hide a hill. When the view of the beach comes into sight though all the pain and struggle slips away and is replaced with a whopping great big smile. 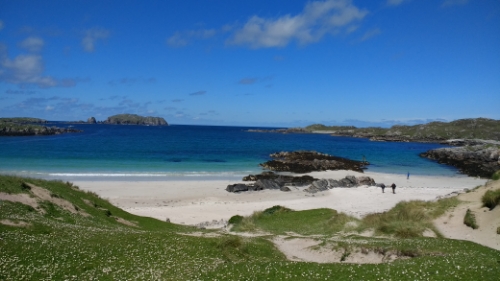 This is Bens first experience of such a glorious beach as he hasn't been along the west coast of the Outer Hebrides yet and he's stunned by the beauty of it. I'm glad we made the extra effort to come out here as it's another gorgeous place. 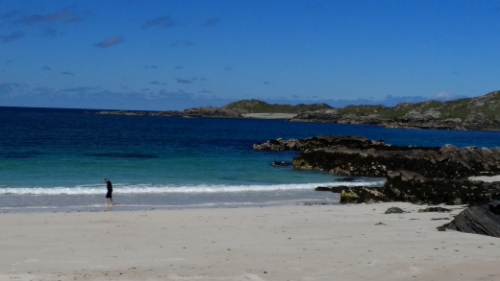 There is an old iron age village there too but it's not quite what it was advertised as and you have to pay to go in so we just admire it from the outside. It's built into the land and reminds me of a cross between a hobbit house and the telly tubby land. 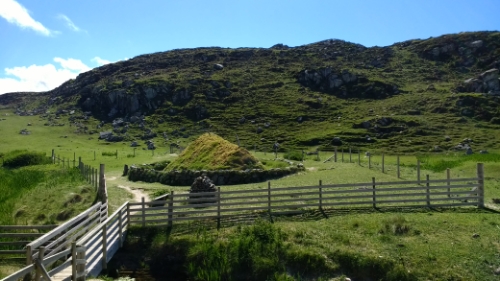 Tearing Ben away from the beach we finally get to ride with the wind behind us and boy is it a welcome break. We're back on the mainland in a quarter of the time it took to ride out there and hoping the wind will stay with us on the road to Mangersta. The sun is shining and the pedals keep turning and the hills keep coming. 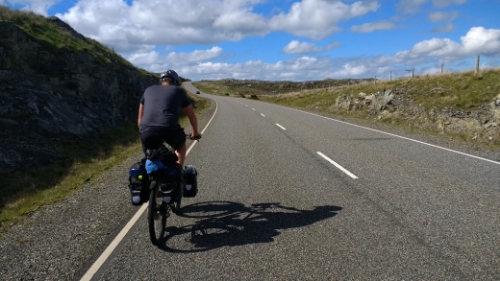 It's just after 5pm when we see a sign for a cafe/restaurant and I pop in to see if they serve beer but the owner informs me that they're not licensed but the shop in Timsgarry is and will close at 6pm. She tells me it's only a 20 minute journey and so I put on the speed to try and get there. We're headed for the bothy at Mangersta and it would be great to have a couple of beers to drink in the sun after a long days ride. I think this lady's means 20 minutes by car though and as the time ticks by the shop never appears. We're both struggling at this point as we started riding at 9:30 and the wind really does take it's toll. We have less than 15 minutes before 6pm when a sign appears and it's 1/4 mile to go, then seeing the shop appear on the left as we round a corner is a welcome sight. I'm off the bike and in there as soon as I stop so that we don't miss out! A couple of beers and ciders heavier we have a quick breather outside the shop where a german guy offers to take out picture - and why not. 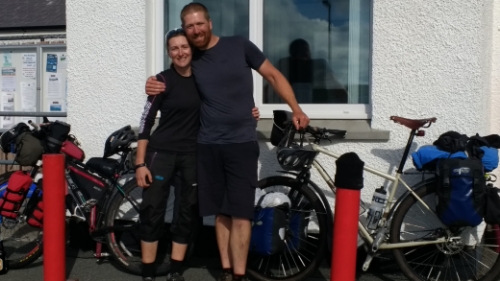 With only 6 miles to go until we reach Mangersta we were informed by the lady in the shop that there was only one hill on the way. Why people even bother to tell us such things is beyond me because we'd ridden two hills before the shop was even out of sight I think! The last few miles are always the toughest and I was really feeling it in my knees on the hills. We were in Mangersta looking out for number 3 when we flew down the last hill. Just before the bottom I saw Ben's front bar bag fall off and thought he'd put out an arm to catch it. He'd actually hit the breaks and I'd eventually stopped and turned around to see him picking up bits and pieces from the road, not a good sign. His iPad screen had taken a fall and smashed in a couple of corners, it still worked but it was such a crappy way to end the days ride.

Getting the lowdown from the owners of the bothy we made our way across the field towards the cliffs. Reaching the end there were a couple of climbers there packing up for the day and they pointed us towards the bothy. We left the bikes and I heard Ben ahead of me say that I need to see this first. I caught up with him and saw what we'd been riding towards all day, Mangersta bothy or the Eagle's Nest as some people know it. 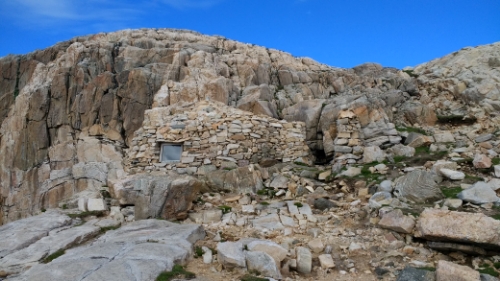 I think my first words were 'Oh my God', followed by 'Wow' and then the biggest smile you can imagine. We'd made it and this was our reward for the night, to stay in this most unique and beautiful place. 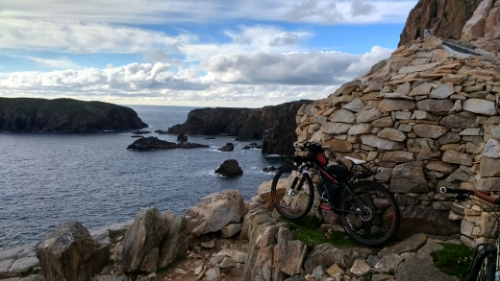 Inside there was a sleeping platform, a bench and a stove and that was all that we needed. Two windows with the most fantastic views and skylights that let the outside in. 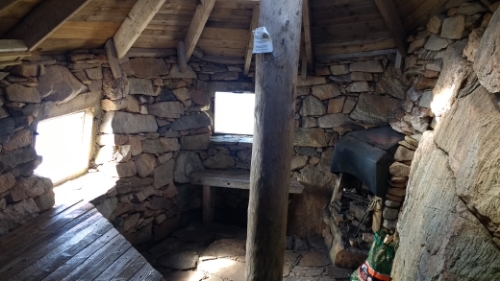 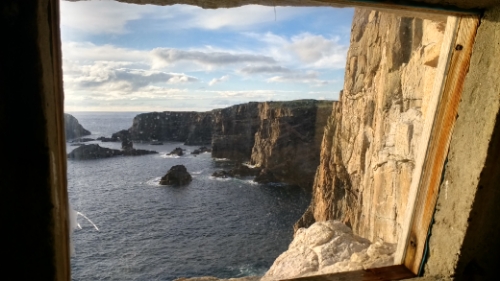 This is a magical place and we couldn't believe just how lucky we were to be here. Ben was giddy and and I was just speechless at the beauty of the bothy and how it was tucked into the cliffs surrounding it. 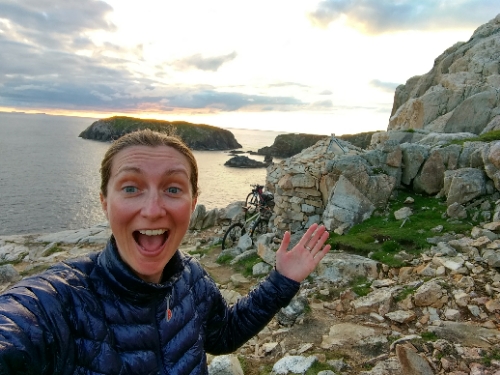 The views were something else as well! 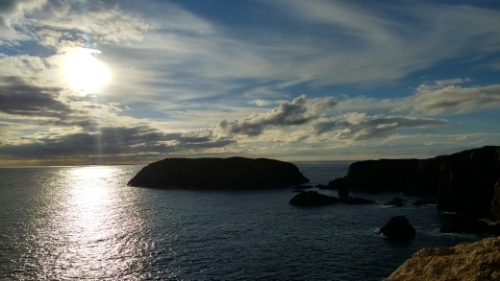 It was so nice to have someone else to share this amazing place with. Ben and I could chat like we'd known each other for ages and he was really great company and he appreciated this place like I did. We sat outside on the rocks and opened a beer to celebrate the day, smiling like cheshire cats and peacefully drinking in the atmosphere. Eating outside we watched the sun move and dip and the sky turn orange. It cast a golden glow over the cliffs and the bothy. 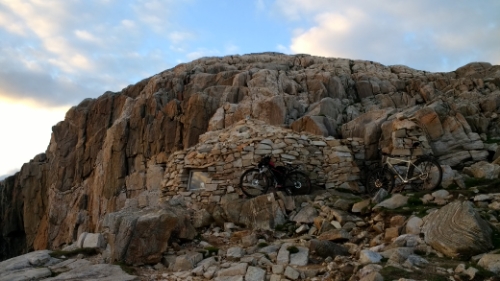 I think that this has to be the best place I've ever visited in my life and I have seen some beautiful places. It's difficult to feel like I've done the place justice in my writing and I know that the photos don't quite do it justice either when you've experienced it in person. It's the kind of place that makes you feel alive and yet at peace with the world, a truly special place. Watching the sunset over the sea and the colours was the perfect way to end a hard but fulfilling day. 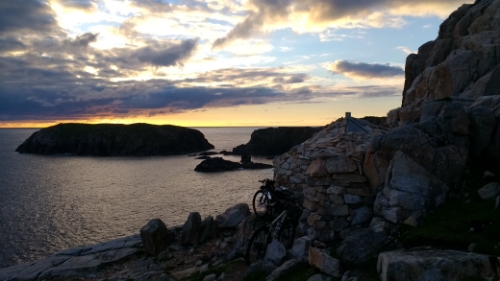 Snuggled up inside the bothy I could hear the waves crashing and the birds squawking as the final light of the day was fading away. This is a day that I will never forget and when I remember it I'll remember happiness, companionship and thankfulness. 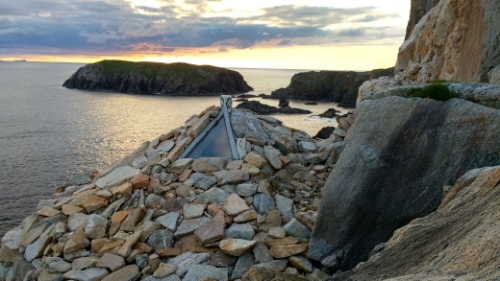