It looks like Scotland has taken it's toll after my 23rd day in the saddle. Whilst drying from the soaking I've had this afternoon in the hotel in Craighouse on Jura I went to the loo only to do a double take when I went to flush it because right there on the loo seat was a gel patch from my shorts that must've been stuck to my right butt cheek! My Endura gel pro cycling shorts are dead and in tatters. 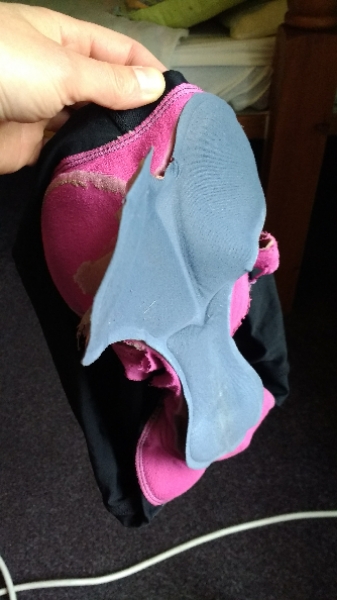 Now these weren't new for the trip but they were in tact when I put them on last and the toils of the Scottish landscape have well and truly beaten them into the ground. On a positive note I'm very glad it's the shorts that look like they do and not my behind and at least I'm headed for Oban tomorrow so can buy a new pair. Still, I'm pretty surprised at the state of them, haha!

Today started off rather well on a visit to Jura Distillery. It is the only distillery on the island and was built in 1810 by The Campbell family who owned the island at that point. 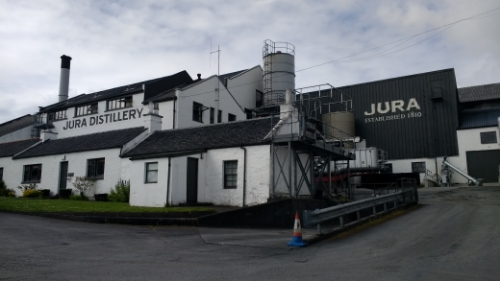 Our guide was Adam and it was just myself and a family of 4 on the tour and it was pretty standard stuff now after 4 distillery tours. The site is large but there are only 16 staff working there and the place is quite modern with stainless steel mash tuns and washbacks. 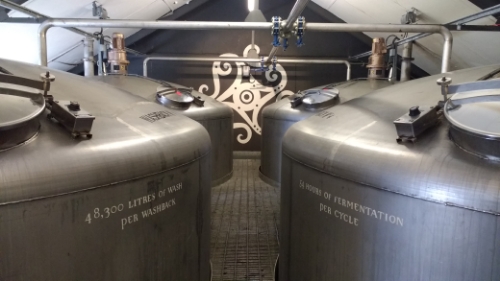 Now to the good stuff, the tasting. They create both peated and unpeated whisky on Jura and so I started off with a wee dram of the 10 year old Origin. I think that it's the best whisky I've tasted so far, quite light and really nice. 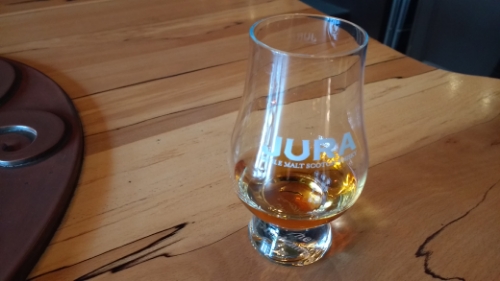 As there were only a few of us on the tour we got a second tasting and so I went for the lightly peated Superstition which was nice but not as enjoyable as the unpeated single malt. We were all happily chatting between ourselves about whisky and the islands and Adam asked if we were around for the upcoming whisky festival. Jura create a special festival whisky each year and he offered us a small taste of last years bottle as this years was top secret and no-one had seen it yet. It was a totally different taste, very fruity but nevertheless rather tasty. I was begining to feel rather jolly at this point having only had some porridge and a cheese scone for breakfast. Having had 3 times as many tastings as we should have and with an empty hip flask I decided to buy a miniature for my travels but wanted something other than what I'd tasted which led to another wee dram of the Duirachs' Own 16 year old unpeated single malt. Mmmm, absolutely lovely! With my miniature bought I was feeling rather tiddly and was going to sit and have some lunch before I got back on the bike. I would have forgotten my backpack if Adam hadn't reminded me - definitely in need of some sustenance I think.

So far so good, I was loving Jura and as I was munching the last of my lunch 2 guys stopped on bikes and one starting talking to me as if I'd met him before. Until he took his woolly hat off I didn't recognise him but it was the father that I'd met on Colonsay with his two sons. He had another son with him today as the others had left but we had a great chat about his hike up the Paps of Jura and him and his son cycled along the road with me for a bit telling me some of the best places to visit along the coast. It really is nice when you meet people for a second time and I felt sad leaving them but there was much to be explored!

There is only one road on Jura that goes along the east coast of the island up to Ardlussa where it turns into a track that leads north up to Barnhill where George Orwell lived and wrote his legendary novel, 1984.

It didn't take long for the rain to arrive and before long the misty drizzle had settled in for the day. I wasn't too worried and continued riding, taking a detour off the road to Knocknome to Lowlandman's Bay as suggested by my friends earlier. 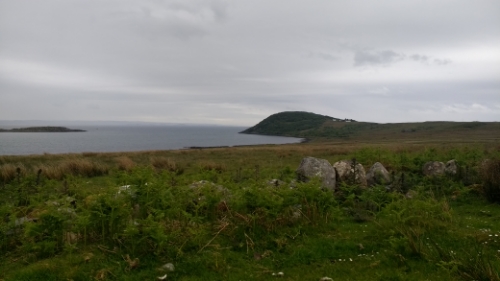 The hills were pretty relentless but I clicked down into granny gear and spun those pedals, each turn one teeny bit closer to the top of the hill, which was usually a fake summit and just hid a further incline. I decided to ride for an hour or so to see if the rain stopped before turning back but due to the weather there really wasn't much to see at all. 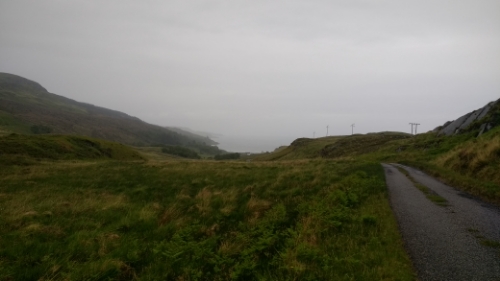 Finally after a rather nice long downhill stretch I saw a sign to see that I was at Tarbert where there was a bay and a standing stone. 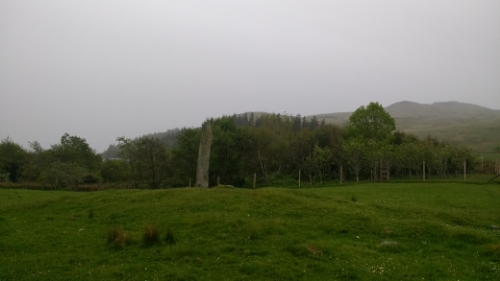 Rather wet now and having ridden 25 miles today I felt it was time to head back to Craighouse to dry out a bit. I knew from previous accounts that there really wasn't much further north and in this weather I wouldn't see anything of much interest anyway. A lot of the last few miles were rather drab as deforestation was underway and it looked rather desolate.

The downs now became ups and vice versa as I retraced the miles back to Craighouse. The midges were out for blood and although it was raining it wasn't cold so I had my sleeves rolled up until I realised that I was covered in the little blighters.

Finally soaked through I arrived back to Craighouse and made a beeline for the hotel bar for a pot of tea and to try and dry out - I looked like a drowned rat!

Connecting to the WiFi in the bar I read the news about the Manchester arena bombing. Being away and with limited access to internet I usually adopt the premise that ignorance is bliss when not being able to read the news. I felt so sad reading the reports of devastation, it certainly puts life into context when these terrible events happen and my thoughts were with those affected.

Hiding out in the bar was all well and good but the rain hadn't stopped and probably wouldn't for the night and I was still 7 miles away from where I was planning to camp near the ferry terminal and so I donned my midge headnet and saddled up a rather soggy looking Beast to take on the hills again. There's nothing quite as demoralising when you know that you're going to get soaked again and put up a tent in the rain.

I think I was probably about 3 miles in when the cracks began to show. I was riding into a headwind again and was dripping wet and sweating from the exertion of the hills when I started to feel my mood deteriorate. Whether it was because I knew that I would be having a few days rest in Oban starting from tomorrow or whether it was just a bit of a mental blip, I had my first mini meltdown of the trip. To be honest I'm surprised it hasn't happened before now but bad weather can bring out the worst in a person and so I shouted to the world. I raved about the wind and the rain, I screamed about the hills - luckily there wasn't a soul around, just some deer that scarpered when they heard me coming but I must've looked like a mad woman! I asked for a deal with the island just to give up with the rain so that I didn't have to put up a tent in the wet, keep the wind in my face but just stop the rain, please. Believe it or not shortly after the rain eased to only a fine drip and I was so thankful that I dared not moan about the wind now in order to keep my end of the bargain.

As the sight of the south coast approached from the crest of the last big hill I was so relieved. Picking a spot just off the road by a stream I quickly pitched the tent without any rain and changed out of my soaking cycling kit into warm, dry clothes. There is nothing better than being in dry clothes after hours of soggy ones and there was only one thing to do, toast Jura on her excellent whisky! 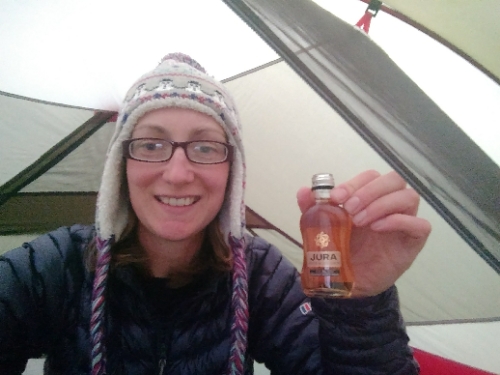