Two days ago I would have thought that today I'd be waking up full of the joys of success, with the feelings of 'good' muscle pain induced by 100 miles on the bike. Instead, I'm waking up with a battered and bruised body and facing the fact that I failed to complete my challenge.

This adventure was a double whammy for me, a chance to get on my mountain bike and ride the 100 miles of the South Downs Way from Winchester to Eastbourne (which I'd talked about doing many times in the last year) and it was also a chance to overcome my fear and wild camp by myself. My plan was to start from Winchester around 3pm on Friday, do about 30 miles on the bike, camp out and then complete the remaining 70 miles of the route on Saturday, jumping on the 19:31 train from Eastbourne back to Clapham Junction on Saturday night - great!

So nicely running ahead of schedule I said goodbye to my better half in the car park at Winchester and set off past the City Mill to find the trail. Thankfully having walked the route in 2012 I remembered that the start wasn't easily signposted so I'd had the foresight to print off a Google map of the area and within 5 minutes I was where I should be at the beginning of the cycle route. 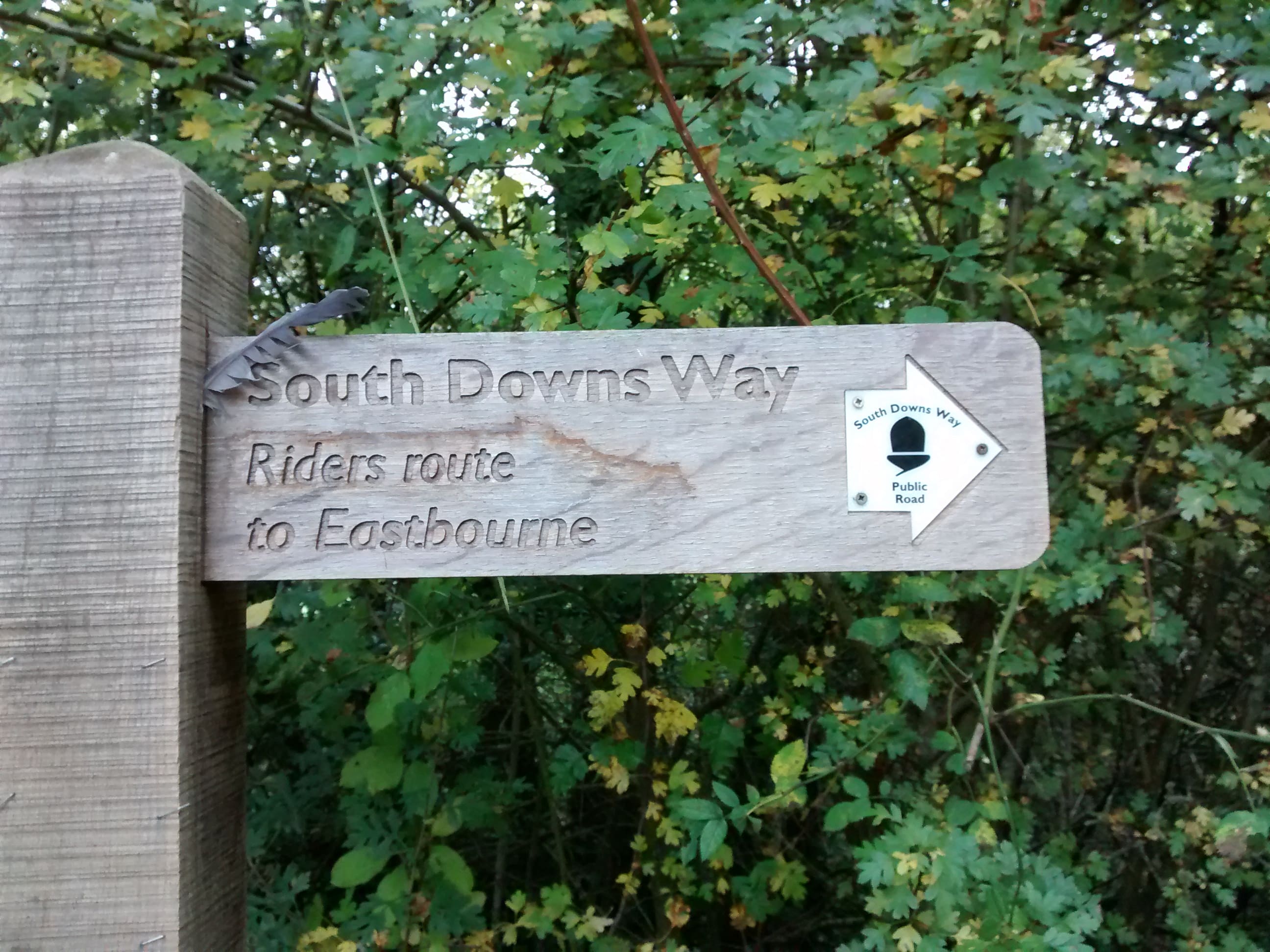 Now this is where the real work starts - out on the open trail! I'd been both excited and nervous for this trip and now I was finally doing it I felt the adrenaline start to kick in. A few miles into the ride and I encountered my first challenge - my seat post bag didn't have enough clearance from the rear wheel and was rubbing because of the bumpy trail so I stopped and attempted to fix it, taking the straps off and re-jigging everything until it seemed happy. Kit wise, being new to bikepacking I didn't want to spend much money so I'd gone for the cheaper option of the Alpkit Airlock Tapered Dry Bag rather than the Koala Seat Bag because of the £50 price difference and I'd read that the dry bag would suffice for most trips.

The ride was quite tough, the hills were a killer as the bike was heavy with kit and I'd forgotten just how bumpy the terrain was, but I knew this was going to be challenging and that's exactly why I was doing it. The miles passed by and the scenery was lovely but I continued to struggle with the seat bag... so much so that by the bottom of a particularly long downhill section I was horrified to find that the rear wheel had worn through the seat bag, leaving a hole about the size of a 5 pence piece - uh oh, not good! I stopped and tried to think what I could do, the straps were all in place, I'd already heightened the seat post twice....good thing I brought some extra bungee cords - 5 minutes later and I was bungeed up and looking much better - fingers crossed it lasts!

I stopped briefly at Beacon Hill trig point to survey my first view of the day - not bad... 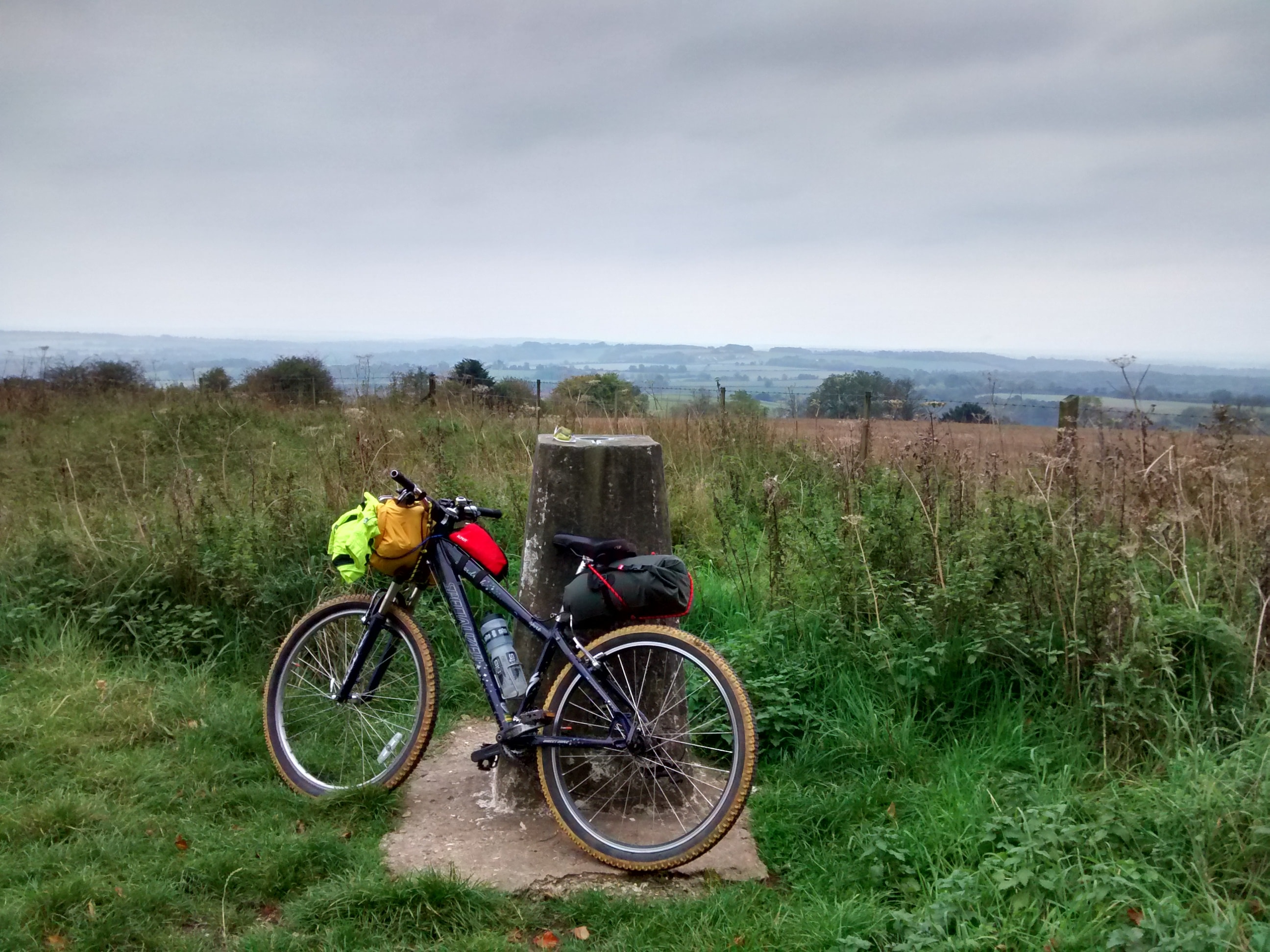 A few hours in and I was slightly worried about how slow I was, I'd hoped to get to Queen Elizabeth Country Park before dark but it really didn't look like it would happen now as daylight was starting to fade, but a few fast downhill sections later and I was about 23 miles in and at the top of a hill overlooking the A3 and the other side of the park. Daylight abandoned me at this point and I gave myself a talking to, turned my new bike light on and ventured into the cover of darkness in the park. Now usually I'm a stickler for preparation before a trip but as you can tell by my previous luggage issues, nothing on this trip had been tested and this included my bike light. I'd bought the Magicshine MJ-858 1000 lumen light a few weeks back and to be honest it hadn't been dark enough on my cycle commute home to really test it out, would it be good enough? Much to my sheer joy, the forest was lit up and I could see - happy days!

I've never ridden a bike in the true darkness of a forest before and I must say it's not as easy as you'd think, especially on the downhill sections as I found out the hard way when I braked too hard, the back wheel slid on the slippery chalk and I hit the ground pretty hard with the bike falling on top of me. To be honest it was inevitable that I'd come off the bike at some point but in the last 8 months of cycling to work I'd never fallen off. Luckily I was more shocked than hurt, there'd be a few good bruises in the morning but no blood and nothing broken so I got back on and plodded along, albeit a bit slower this time.

I'd been on the bike for a good 4-5 hours at this point and was making fair progress towards my 30 mile goal so decided to stop and eat some dinner. I found a nice clearing in the trees, got my headtorch out and munched on some sausages, cheese and salad - very gourmet! I text my boyfriend to let him know how I was getting on and told him that my plan was to continue onto Harting Down where I'd look for a spot to camp and text him again when I was settled in and ready for bed.

Off I set again and I was looking forward to stopping for the night now, the gears had been giving me quite a few problems in the last 4 miles or so and now I couldn't get into the lowest gears so any uphill sections were a killer and I'd had to walk some of the steepest sections pushing the bike which is a hell of a lot harder than just cycling the bike given it's weight and the added weight of my kit. I was just shy of the road between South Harting and Harting Down and climbing up a hill desperate to get into a lower gear when disaster struck - the gear lever was so hard to move and I put so much pressure on it to try and get into a lower gear that something was bound to give and unfortunately that something was my thumb. A shot of heat and pain went through my right thumb as it bent back at the knuckle and then popped back in - holy crap that hurt! Down the bike went as I hopped around holding my thumb and swearing, I couldn't believe I'd just done that, how stupid, is my thumb ok or not? 5 minutes and a few tears later I got back on the bike, gripped the handlebars and touched the gear lever - hot pain shot through my thumb and I knew then that it was all over...

One phonecall later and I was freewheeling downhill on the road to South Harting to wait by the pub for my boyfriend to come and rescue me, so annoyed with myself and frustrated at having to bail out. I had 30 minutes to wait and a few tears came and went but by the time my knight in shining armour had arrived I'd accepted what had happened and felt mostly disappointed, pained and was trying to put a positive spin on things.

It is hard to fail, but it is worse never to have tried to succeed.
- Theodore Roosevelt

I had tried, I went out there and gave it my best shot and next time I'll succeed! All in all I got what I went for to a certain degree...adventure!