Today has been a struggle. After a really good sleep last night I woke still tired from yesterdays off-road ramblings. I figured maybe I'd had too much sleep and forced myself up and to the cafe for my morning cuppa.

The day was dry and bright and without any excuses to stay I hit the road south towards Applecross. The fact that I looked at my watch 3 or 4 times in the first hour of riding showed that I was feeling lethargic. I just didn't feel like there was anything in my legs to get me up the hills and it wasn't due to nutrition as I'd eaten well last night and this morning. The miles ticked over slowly until I finally turned west for the Applecross coast road. 24 miles to go.

The coastal views were beautiful as usual but the ups and downs were taking their toll and I was finding it difficult to enjoy the views as I felt so sluggish. Rounding a corner I saw a spot to rest for a while and lay down on a rock. It's only the second time I think I've felt so exhausted and it's frustrating as I really wanted to just enjoy myself. Finding myself nearly falling asleep I got up and pushed on. 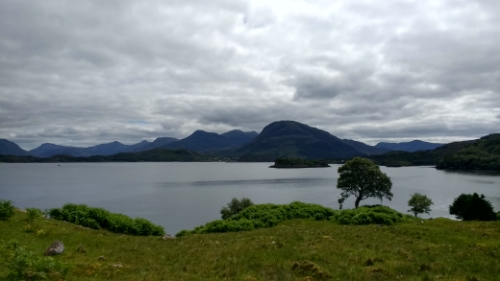 At the bottom of a rather large hill I decided to see if my MP3 player might be working to give me a boost for the uphills. It had died a death a good few weeks ago on the day I'd mashed my leg because I'd been listening in the rain. No joy unfortunately, it was still dead as a dodo and so I told Monkey he had to serenade me up the hills or get off and push!

Monkey's singing abilities were rather non existant as was his effort at pushing and so I plodded on in silence muttering, 'just keep pedalling' - a bit like Dory in Finding Nemo with her 'just keep swimming' annonyingness. I then met another cyclist who was out for the day. He stopped to chat and he was doing a loop from Applecross, had been over the pass at B? na Bar?? and was heading back round the coast. When we set off riding it was nice to have someone ahead of me, it felt like I had something to aim for and it was comforting in a way to see someone else battle with the demons of the inclines. 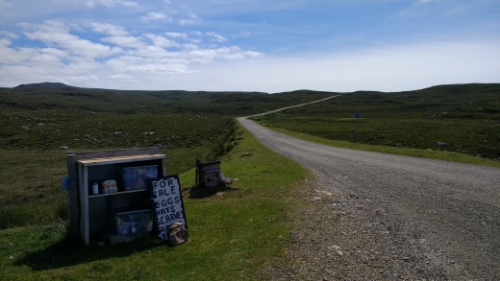 We played leapfrog for the next few miles as I overtook him whilst he was admiring the views and when he stopped for lunch I continued. I wasn't particularly hungry but after another few miles I really needed a rest and so decided to tuck into some cheese and oatcakes and lie back in the sun. 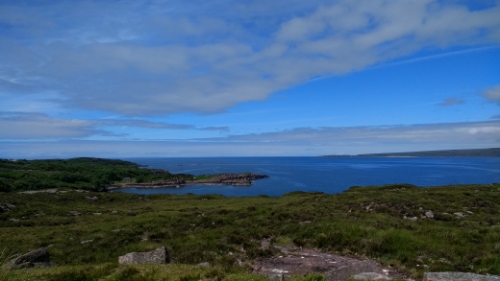 Dragging myself back onto the bike at least I knew I was halfway to my destination. The one thing that really made it easier was the wonderful weather, it has been a long time since I've had such glorious sunshine and blue skies. It wasn't long before I started to feel a bit better and the hills didn't seem so demanding. Rounding the top of the coast was a bit of a mental milestone and before long I was smiling and enjoying the ride as much as I had wanted to this morning. 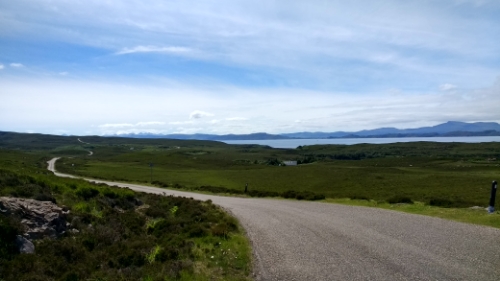 At the crest of a hill I came to a parking spot and was mesmorised by the view. My first close glimpse of the Isle of Skye and it was rather breathtaking. 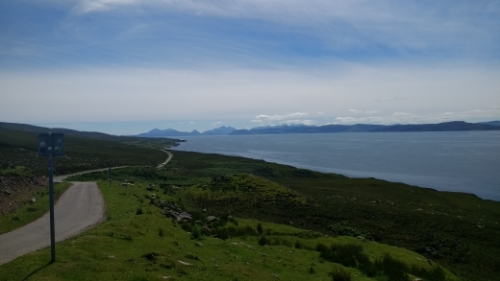 That was where I was headed in a few days and it certainly looked amazing. Buoyed by the sunshine and views I coasted along the next few miles, thoroughly enjoying myself. I even managed to dodge a true Scottish traffic jam, courtesy of the Highland Cow, haha. 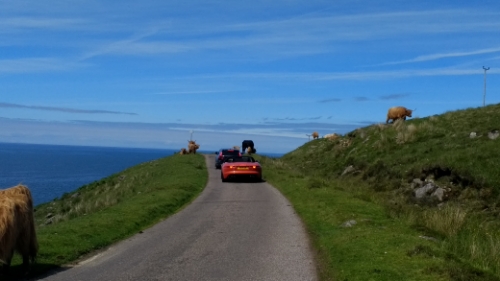 Another corner and another hidden gem of a beach to marvel at!

I knew that Applecross was only just a few miles around the corner from here and it was a relief knowing that I would make it in time to go to the shop a mile south in order to refuel. I was out of main meals and at one point in the day was worried I wouldn't make it to the shop in time.

One shop stop later and I pulled up outside the Applecross Inn. My battery pack that I charge my phone from every night was dead and I really needed to stay somewhere to charge it but riding along the coast I'd seen lots of lovely wild camp spots and so asked at the bar if I could charge my battery whilst I had a pint. It's a hard life but three pints later my battery pack was charged enough for a few nights charge and so I retraced my steps back to the bay to find a spot for the night.

Lying back in the grass and resting my weary legs I'm hopeful that tomorrow I'll feel back on form and ready to roll. The therapy of the gorgeous views soothe my woes and calm my mind. Roll on tomorrow! 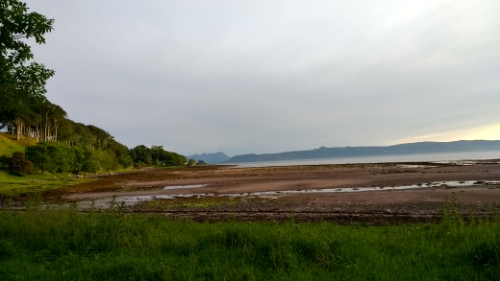