If you're into mountain biking and live in the London area then at some point like me you'll be told to go riding in the Surrey Hills. I usually ride alone, more from lack of mountain bike buddies than any other reason so finding the London Mountain Biking Group on meetup last Friday afternoon I decided to pluck up the courage to join a group ride on Sunday in the Surrey Hills.

I arrived at Westhumble station just after 11am and waited nervously for signs of other mountain bikers. It wasn't long before a lady approached me and asked if I was waiting for the meetup ride, her name was Petra. Other riders soon appeared and started chatting, thankfully I wasn't the only one who hadn't been before and whilst we waited for our leader Rob to make his way around the carpark that is the M25 there was plenty of conversation amongst the growing group. My nerves were unfounded as everyone was very pleasant and obviously we all shared a common interest of biking which is a bonus when trying to make coversation with strangers. Now I only had to be worried about being the person at the back of the group, struggling up the hills!

Slightly later than planned Rob arrived and led us out of the station and out into the hills beyond - adrenalin was pumping and the sun was shining. A few miles in and I was beginning to get the hang of being amongst a group of riders, sometimes singlefile and other times chatting alongside another rider. The pace was fairly easy going and the scenery was beautiful, the blue bells were starting to bloom and some parts of the woods were a carpet of bright blue and purple giving a feeling that spring had truly sprung.

The riding was rather varied, part singletrack and part bridleway/byway and given the recent rain during the previous week there was plenty of mud and puddles - I'm sure my bike is happier when it's coated in mud rather than the dust and pollution of the daily commute through London.

We encountered a fair few downhill sections and I have to admit that although I love the thrill that comes with hairing down a muddy, rocky trail it's a bit harder when surrounded by other riders and my brakes certainly got a thorough test when Susan who was riding in front of me, came off in a slippery chalky section - thankfully I managed to stop in time and she was lucky not to have done any major damage, just bruising.

I needn't have worried about my biking abilities for this ride, Rob was very good at ensuring that we stayed together and re-grouped regularly so as not to leave anyone behind and to catch our breath after some of the harder sections. One of the reasons I'd joined the ride was to become acqainted with the trails and it was very nice just to follow someone who knew where they were going rather than having to navigate every junction myself as I'm not known for my navigational abilities at the best of times, never mind on a bike whilst trying to appreciate the surrounding countryside. 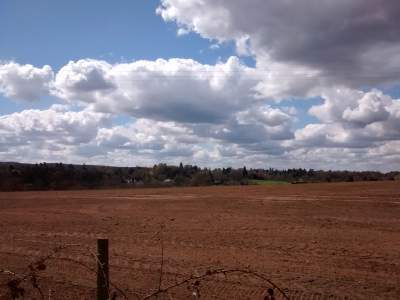 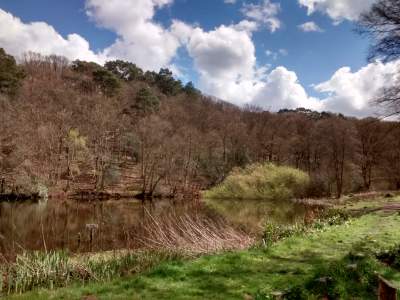 We ticked off the miles through some very picturesque scenery, the sun continuing to shine in the blue skies above, the happiness coursing through my body like a drug - it doesn't get better than this surely? 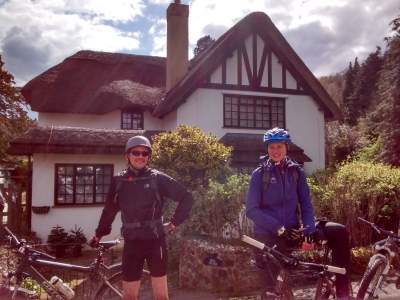 Having stopped for a late lunch not far from Leith Hill when we resumed it was a steep uphill to start and not long afterwards there was a killer climb up past some of the grape vines near the Denbies vineyard. I ploughed on, pedals turning and my legs on fire, leading the group with two guys on my back wheel, stubborn enough never to give up and feeling rather pleased when the guy behind me declined my invitation for him to pass me if he wanted to - it's always nice to know that you're not the only one suffering! At the top we had a good breather as we waited for everyone to catch up and then it was the final slog through a very muddy North Downs Way track before a thrilling descent adjacent to the vineyard before finally arriving back at Westhumble Station.

Ride done it was time for a thirst quenching beverage and before Rob had finished suggesting the pub down the road I was on my bike and headed for the beer garden. A few people headed home but there were at least five of us sitting in the sunshine enjoying a nice post ride drink and chat. Two ciders later and myself and Alex were finishing up our drinks and it was time to head for the train station home. I can only say that my first experience in the Surrey Hills was beyond all of my expectations, both ride-wise and the social aspect. Thank you to the London Mountain Biking group for a fantastic day and to Rob for organising and leading a great ride - I will no doubt be joining you on another adventure soon! 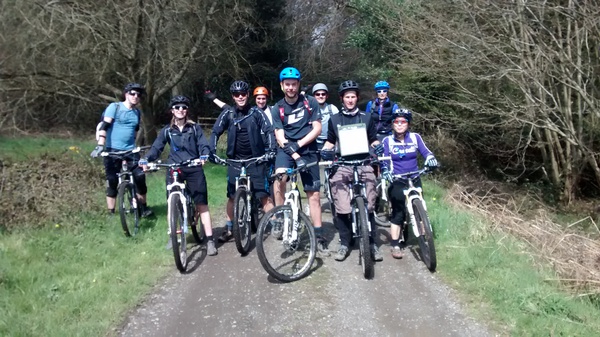