My roll mat definitely has a slow leak in it somewhere as twice in the night I woke on the ground and had to blow it up again. I slept well though and was packed and eating breakfast by the gift shop just after 9am. My plan for today was to ride the 6 miles back to Kilchoan and get the ferry over to Tobermory on Mull.

Checking the ferry times I decided to be leisurely and aim for the 11:45am one. I set off back along the road I'd ridden yesterday and it was lovely and quiet. It certainly wasn't as tough a ride going back as it had been coming out yesterday and as I neared the coast I could see the 10:15am ferry coming in. It was 10am and I didn't think I could make it but God loves a trier and I love a good challenge and so put on a spurt to try and catch it. Every little hill slowed me down but I gunned it on the flats and the downhills whilst checking my watch. 10:05am and I could see the turn back onto the main road. 10:07am and I was sure I wouldn't catch it now but I couldn't give up. My legs were pumping like mad and I made the final turn onto the road to the ferry terminal. I heard a car speeding behind me, another person hoping for a last minute dash to the ferry too but they had an engine! Rounding a corner I could see the last cars driving off the ferry and the others starting to drive on. Come on legs, keep going! I couldn't believe it, I pulled up just as the foot passengers started to board and I was gasping for breath but I'd made it, wooohooo! Challenge completed!

The crossing to Tobermory was only 40 minutes and by the time I'd recovered from my epic efforts we had arrived. I rode along the main street past each brightly painted building, what a lovely little place.

Important things first I headed for the distillery and luckily there was a tour starting in 5 minutes. The distillery wasn't actually producing, they are on an 18-24 month break because they are going to be starting a major overhaul of the equipment. The distillery dates back to 1798 and the current mash tun, washbacks and stills are around 45 years old and so need replacing. 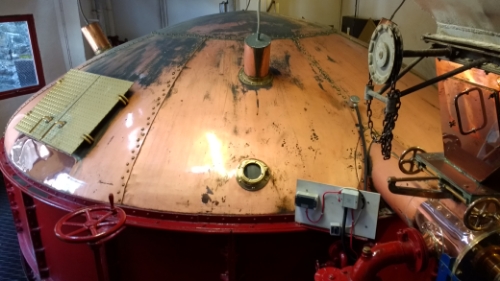 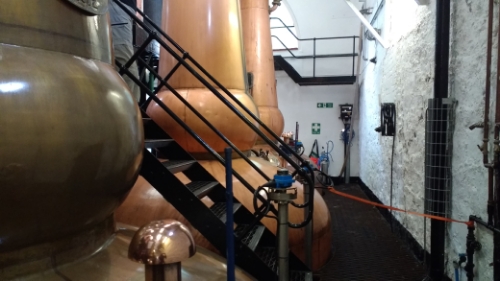 Tour over it was time for the good part, the tasting. Tobermory produces both an unpeated and a peated whisky and so we tried both. I found the peated whisky Ledaig was too smoky for me and added quite a bit of water to try and make it pallatable but the unpeated one definitely hit the spot. 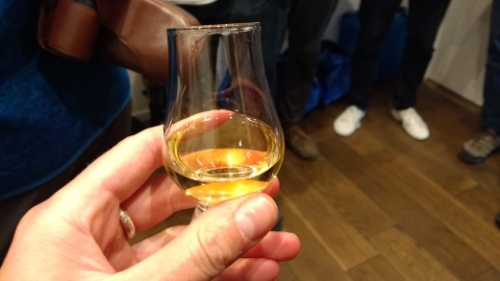 It was only noon and I felt half cut coming out of the tour and so sat down to have some lunch. Riding back along the main street to find the youth hostel I was hoping to find a package waiting for me that my Mam had sent, some new contact lenses. On asking the lady she told me that there was no post today and she was rather abrupt and not very helpful. I asked when the postman usually arrived and she just repeated the fact that there was no post and didn't even ask my name. Not quite what I'd hoped for, it meant that I'd have to hang around here to see if they turned up tomorrow.

With a bit of downtime I decided to do a well overdue bit of maintenance on The Beast and so rode over to a bench by the harbour, took all of the bags off and replaced both the front and rear brake pads. They had been needing it for the last week but somehow I never managed to find the right time to do it. Brake pads changed I was feeling thirsty and had to decide what to do for tonight and so had a pint of the local Mull brewery ale by the harbour.

I was thinking that if I decided to stay in the hostel for the night then the lady there might be a bit more helpful as I really needed my contact lenses, I really don't like riding with glasses. I went back to the hostel and found that it was closed until 5pm and having decided to take the hit to the budget and stay the night I had an hour and a half to kill so did what I do best when I have some downtime, booooooooze! I popped into the Co Op and bought two bottles of the Mull brewery ale and sat on a bench by the harbour watching the world go by and slowly feeling the relaxing buzz of the alcohol. The booze part of the trip was really going well today! 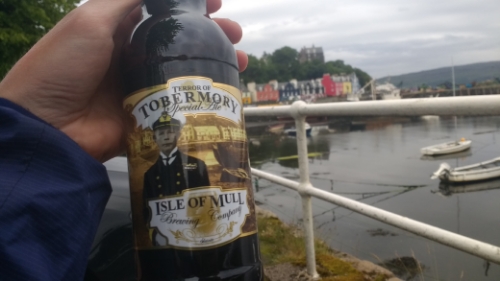 At 5pm I checked into the hostel and settled down in the common room with a beer and the tennis on the TV. It's strange how my plans can change so suddenly and although I would have liked to have picked up my package and moved on today I was also happy to just chill with a beer, maybe it was the beer talking!

Getting rather quietly inebriated as the night went on I got chatting to two fellow cyclists. I love chatting to other cyclists, it's great to find out their travel plans and kit and it's like some secret group that you belong to where everyone is friends. I had a big bar of chocolate and so shared it around and also shared my beers. I've been on the receiving end of kindness a lot during this trip and so it's nice to pass a bit of that on.

Here's to hoping that tomorrow my contact lenses will arrive and my hangover won't be too bad, haha!