Waking in a strange place it took me a few minutes to realise where I was. It was 8am and I'd slept pretty well even with a painful ankle. I had a good look at it and decided it wasn't too bad, some of the bruising had started to appear but it wasn't too swollen. 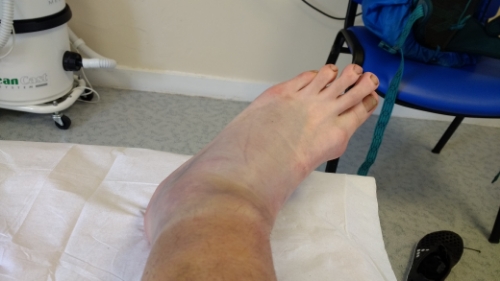 I'd already decided that I should go and get it checked over at the hospital just to be on the safe side. I was able to walk on my toes and I guessed that it wasn't broken but I don't want to make it worse or damage it further. Knowledge is power and I wanted to know what was what.

I went downstairs and made myself a cup of tea and soon after Andy appeared. We chatted over a brew and he asked what I thought I would do today and I explained that I wanted to get my ankle checked over. He agreed that it was the sensible thing to do and told me that he would put the Beast in the back of his van and drive me to Broadford where I would be able to get it x-rayed. Again I was profusely thankful and grateful as I knew that both him and Janet were very busy and were going out of their way to help me.

Driving along the west coast past Uig where I should have been riding today was a strange feeling. I am guessing it was about a 30 mile drive to Broadford and the three of us chatted happily on the journey.

Arriving at the hospital it was time to go our separate ways and I felt that my thank-you's seemed incredibly insignificant in relation to the genuine and amazing help that Andy and Janet had offered me. Declining any payment for help or even the petrol all I could do was tell them how wonderful they were and how grateful I was for all that they had done for me.

It was a small hospital but I was sent for an x-ray within 2 hours. The doctor wasn't sure if there was a small fracture and so I was nervous but the radiologist said that at first glance he couldn't see anything obviously broken which helped me to relax a bit whilst waiting to hear back from the doctor. He confirmed that there was no break but that there was likely damage to the ligament that connects the leg bone to the foot bone. It would continue to swell for another 48 hours and I should just take some ibuprofen, ice it and keep it elevated. The relief was palpable, this wouldn't be the end of my adventures!

My timing of injuring myself couldn't have been worse in a way as my friend Barry was due to meet me tomorrow to ride with me on Skye for a week but I was just trying to focus on the positive news that I wouldn't be put in a cast and have to end my journey early.

Hobbling a few hundred metres down the road with my bike to the Broadford backpackers hostel I was glad to find that they had space for me and I was settled into my room in no time. One more outing for the day and I could finally rest my ankle. The Spar wasn't far at the end of the road and so I stocked up on recovery essentials - chocolate, custard creams, lager and wine to drown ones sorrows; yoghurt, fruit and nuts for a healthy breakfast and milk to ensure suitable hydration with countless cups of tea! Ooh and frozen peas for my ankle.

The rest of the evening was spent chatting and messaging family and friends to share the news and assure them that I was fine and that I would rest and not do anything silly like trying to ride my bike too soon. Peas on my ankle I had everything I needed within reach, alcohol, chocolate and a book I'd borrowed from the bookcase. Not a terrible way to spend an evening at all! 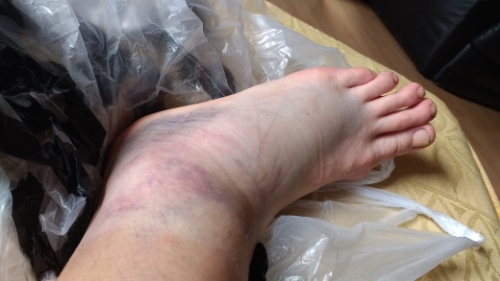