What a first week! So much to tell and I'm not sure where to start really. Just this morning I was talking with a guy called Tomas from the Czech Republic who arrived late last night and bivvied in the corner of the field. It turns out he's been training for some sailing qualification here and is now walking back to Glasgow with a very heavy load of bags. He had also quit his job to come here and as I wished him good luck and waved him goodbye it was my first smile of the day.

Today is my first rest day on what is day 8 of my trip. My last post was on Wednesday when I was camping just outside Dunbar next to a group of Duke of Edinburgh award students.

From there I rode to Edinburgh via the beautiful if not windy and rather cold coast of North Berwick. Having reached the capital I sat in the park looking up at Edinburgh Castle and had a celebratory ice cream in the sun. 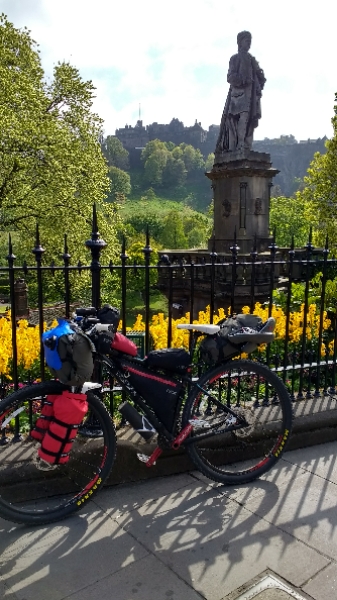 I hadn't planned where to go from here but a few people had recommended the Pentland Hills and I had enough hours of daylight left so I said my farewells to the hustle and bustle of the streets of Edinburgh and headed along route 75 on the Union Canal. At Balerno I followed the signs for Harlow and finally reached the gateway to the hills in the early evening and what a sight they were. An hour or so before I'd been surrounded by people, traffic and buildings and now I was looking at a vastness of beautiful yellow and green hills and breathing in the fresh air. I knew immediately that I'd made the right choice to come out here and as I started the slow pedal up the hill over towards Grosvenor Reservoir the size of my smile grew with the incline of the trail! 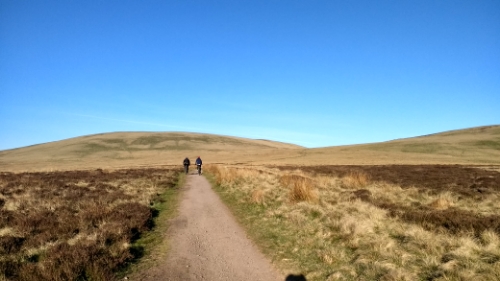 Reaching the top of the hill I stopped to chat with a couple of other mountain bikers who were curious of the load on my bike. I let them go ahead before following them pdown the rocky trail. The wind in my hair, sun on my face and a fast ride to the bottom and it was all over, man I just love a good bit of off-road riding, it makes you feel alive! 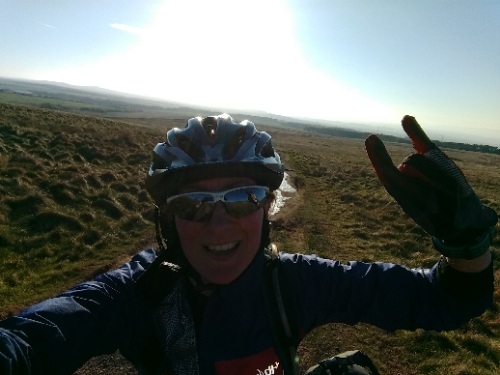 Riding around the reservoir I saw a tandem propped up against the wall and heard voices. Maybe they had the same idea as me of sneaking some water for a wild camp... but no, when I got closer I could see that there was a couple all kitted out in wetsuits and enjoying an evening wild swim, awesome :-)

After a long 60 mile day I setup camp and cooked dinner just as the sun was setting over the hills. My first wild camp of the trip, just me and the sheep - this is what it's all about. 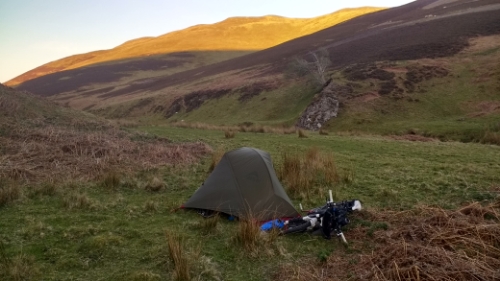 As morning broke I lazily refused to emerge from my snuggly cocoon and finally packed up and started pedalling around 11am. The sun was still shining and I thought that I might ride a few trails in the hills and camp out again. My plan was shortlived though after attempting to ride up a rather steep track. I'd only gone a few metres before my front wheel struck a large rock and with the weight of my bike there was only one way that this was going and that was down! It's one of those moments when you know you have to try and get off the bike before it lands on you and I managed it most ungracefully, hopping back on one leg before landing on my back and rolling down the hill. Feeling pretty stupid as a nearby walker turned back to see me hit the dirt I swiftly decided to change my plan for the day. Poor monkey was thrown from my backpack and had a face full of dirt too but neither of us were hurt and so we said goodbye to the Pentland Hills and headed back to Balerno to pickup the Union Canal towards Glasgow. 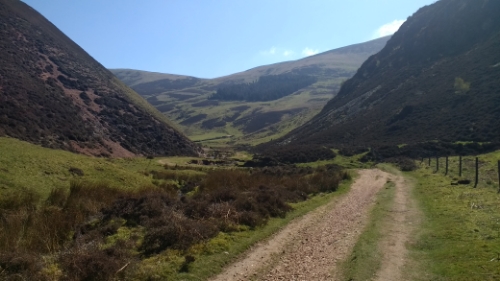 The next two days were full of peaceful flat towpaths as I took the Union Canal to Falkirk and then the Forth and Clyde Canal to Glasgow. Swans, ducks, herons, anglers, cyclists, runners, dog walkers - you name it. Every hello or nod of the head was a little boost and an acknowledgement that I wasn't alone on my trip. 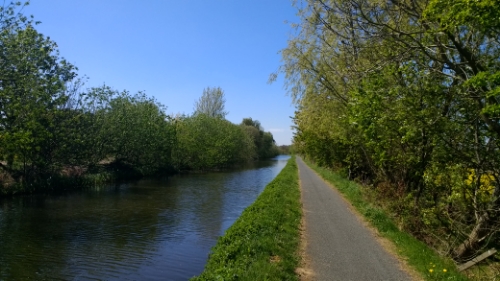 At Falkirk I got to see the Falkirk Wheel in action. A marvel of modern day engineering it is the worlds first and only rotating boat lift, allowing boats to travel from the Union Canal to the Forth and Clyde Canal without the numerous old steps of locks that preceded it. It was really impressive and I hadn't even heard of it before - how's that for a bit of exploring, haha. 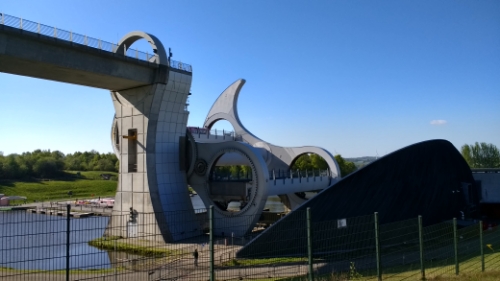 I arrived in sunny Glasgow around lunchtime on Saturday and was immediately thrown back into London commute mode with 3 or 4 lanes of traffic flowing through the city centre. Similarly to my time in Edinburgh I wasn't really interested in spending any time here but enjoyed a nice break by the River Clyde to eat my lunch. 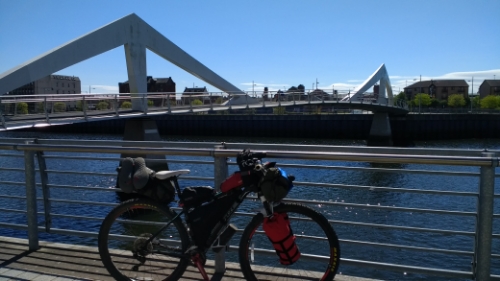 Finding cycle route 7 I rode south west to Paisley where I joined the Paisley to Kilbirnie Railway Path bound for Lochwinnock. For most of the miles that followed myself and a 70 odd year old man played cycle leapfrog. We chatted at times and he advised me on the route as I passed him and then checked to see if I was ok when he passed me. He was riding at a good rate with some small rear panniers and the only way I could pass him was on the hills. I hope I'm still cycling when I'm that age.

Reaching Lochwinnock late afternoon I decided to head to the Clyde Muirshiel Regional Park for my second night of wild camping. The road was a serious test of mental strength. Long winding steep inclines where at some points it was easier to get off and push than to try and steer the heavy load at such a low speed. Telling myself to just get to the telegraph pole or to the gritting box, sweating profusely with screaming calf muscles in the hope that the map was correct and there was a track at the end of the road to take me into the park. Thankfully after asking a guy in the last house along the road, there was a track and I went off-road and into the land of sheep again. My first mission was to find water and the further I rode I began to realise that this could be a problem. The nice little blue lines on the map were stagnant trickles of green slimy water. It hadn't rained for a while and if I couldn't find water then I would have to retreat back to Lochwinnock to ask in a pub there - and there was no way I would be cycling back up the monster hill again which meant I'd have to find somewhere else to sleep. Nevertheless I gave myself another hour of riding to try and find something and if not then I'd have to change tactics. The land was full of tussocks and boggy patches but in the evening sunshine it was lovely to feel lost somewhere in nature. Luck was on my side as I found a small flowing stream and with that sorted I soon settled down for my second night of wild camping. 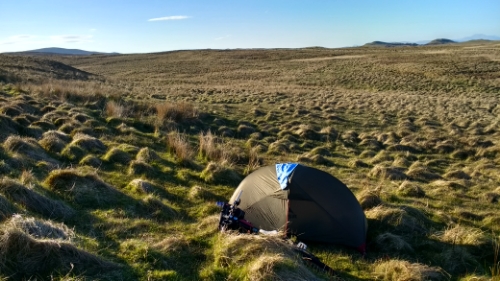 The solo wild camping was something that I'd been nervous of before this trip and yet on both nights this week I'd never felt scared as I knew there wasn't anyone around but the wildlife. I'd like to say I slept soundly but it was Saturday night after all and the grouse were out on the pull, seemingly right outside of my tent. The calls of both the male and females went on for hours until I seriously hoped they'd just hurry up and get it on so that I could go to sleep. First world problems eh? ;-)

There really is nothing better than waking up in the middle of nowhere with the sun blazing and blue skies overhead. Packed up and back on the road down to Lochwinnock I got to enjoy the fast descent that had taken me so long to climb up the previous evening. From here it was 3 miles to Kilbirnie along the cycle path and then 10 miles on road across to my destination for the day, Largs. Feeling rather tired and with wobbly legs I tackled the ups and downs of those 10 road miles in the sweltering heat as the wind was nowhere to be found. At one point the only way I could keep myself going was to chant 'ice cream, ice cream, ice cream' to myself knowing that it was going to be the best taste ever once I got to the seaside. I was not disappointed by the large cone with strawberry sauce and a flake when I arrived in Largs and sat by the ferry terminal watching it come and go to Great Cumbrae Island. I'd done it, gone from east coast to west coast and arrived at the gateway to the Islands, woooohooooo! 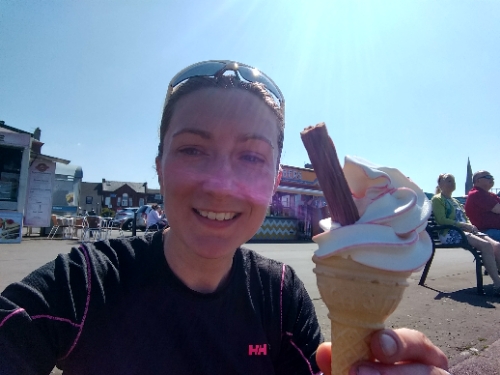 It's only been 7 days of cycling but already it feels like I've been away for a lot longer. Then on the other hand it seems like this is just the beginning now that I've arrived on the west coast as this week I begin the real adventures of the Islands. Arriving into Largs yesterday I could see different islands for miles around and each one is ready to be explored, so exciting.

With my washing drying on my super amazing clothes line (thanks Barry, totally wicked gift!) all that is left for me to do today is to grab a few food supplies and decide where to go tomorrow.... 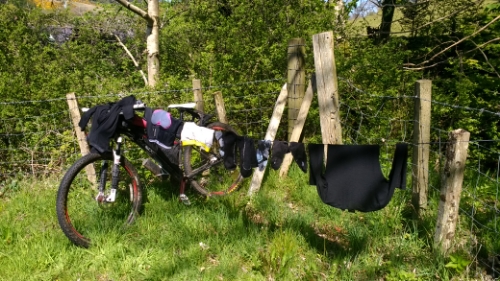