It absolutely lashed it down all night last night and I woke this morning to a tent filled with puddles and a porch under water. 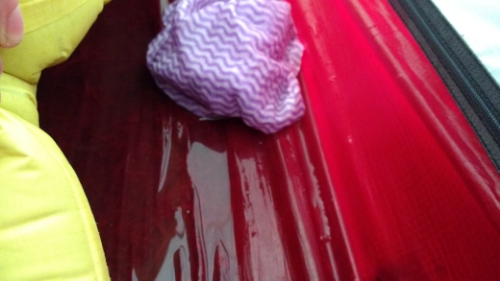 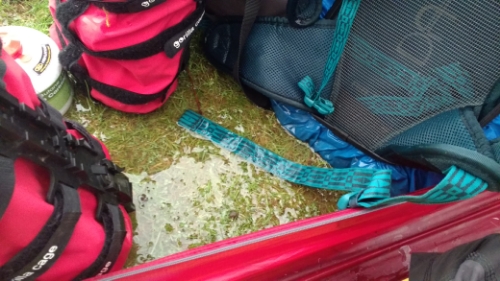 The sheer amount of rain had caused a nice puddle to form under my tent and that had seeped up through the groundsheet. My rollmat was soaked, everything in the porch was soaked but luckily my clothes and sleeping bag were pretty dry. There's nothing I could do about it but try to pack away, get on the road and hope that it stopped raining later to try and dry everything.

I could literally wring the tent out it was that soaked and it was still raining as I started the long climb out of Carsaig. It would be a lovely place in the sunshine I'm sure. Inching my way up the steep road the little waterfall that I passed yesterday was a raging torrent today, splashing over the road and roaring like Niagra Falls.

The incline was steep but I put my head down and before I knew it I was cruising into Pennyghael. The local shop was open thankfully and did teas and coffees and so I entered like a drowned rat apologising for the mess I would make. The lady was lovely and didn't mind at all. We chatted over a cuppa and it turns out that she was from Newcastle and moved here 10 years ago after falling in love with Mull. I love to hear stories like this and my favourite thing that she said was, 'it's just weather, you'll only get as wet as your skin'. Wise words - I was already wet to the skin!

It was about 18 miles to Craignure where I would catch the ferry back to Oban and it was a little bit damp to say the least. Most importantly it wasn't cold and I managed to stay warm but wet. I was wearing my fetching green poncho, it does manage to keep your core dryer than just a waterproof and I was glad of it today as it was the kind of rain that is quite light but totally soaks you.

With only 6 miles left to Craignure I was willing the road to disappear. I had nearly had my fill of the rain and just wanted a break and to be in some kind of shelter. Those last few miles were long and I was so pleased when I arrived at the ferry terminal. Through sheer luck the ferry was there and waiting and within 15 minutes I was onboard and had shed my outer wet layer. Heading straight for a nice hot brew it was nice not to be sprayed in the face with water constantly. 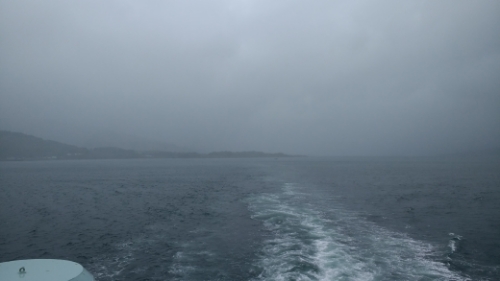 Forty minutes later I arrived in a very wet Oban - apparently the whole of the west coast is covered in this rainy front today. At the ferry terminal I asked about my options for visiting Coll and Tiree as I knew that there was a music festival on Tiree and that the ferry times might be different. I was told that I could get on the ferry to Tiree in 15 minutes and buy a hopscotch ticket to go to Coll and back to Oban whenever I wanted to. From my original plan of sitting in the local pub all aftenoon in Oban I decided to hedge my bets and go straight out to Tiree, it could only be raining there too!

The 3 hour crossing was lovely. I was sat in a comfy seat with WiFi and watching the womens singles final at Wimbledon. Two young lads had sat next to me to watch the tennis and I warned them that I stunk because I'd been cycling and they said it didn't matter but after an hour I could see the lad next to me holding his nose, hahahahahaaaaa!

As we got closer to Coll and Tiree the rain had stopped and I could see sunshine. Earlier when the guy in the cafe had asked what I'd like I had asked him for a tea and some sunshine in Tiree and he had laughed but it looked like he might have pulled some strings, and only for £1.50!

Disembarking the sun was shining and I was ecstatic. All I had to do now was to cycle down to a nice beach and dry out my tent. 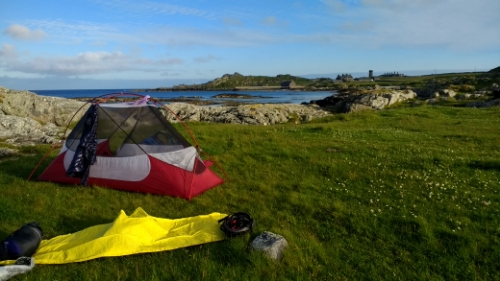 With my kit out drying I went to wash my feet in the sea and cracked open a beer that I'd bought at the Co Op on the way. Such a difference to this morning and being soaked through and now I was sat on a rock in the sun with a beer thanking the weather Gods for their kindness. It just goes to show that you never know what's around the corner and right now in this gorgeous camp spot I'm happy just to sit and be. Happy days! 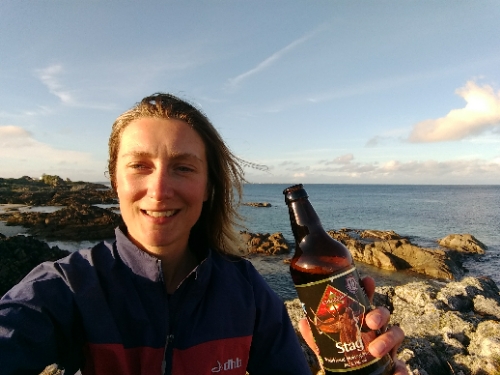 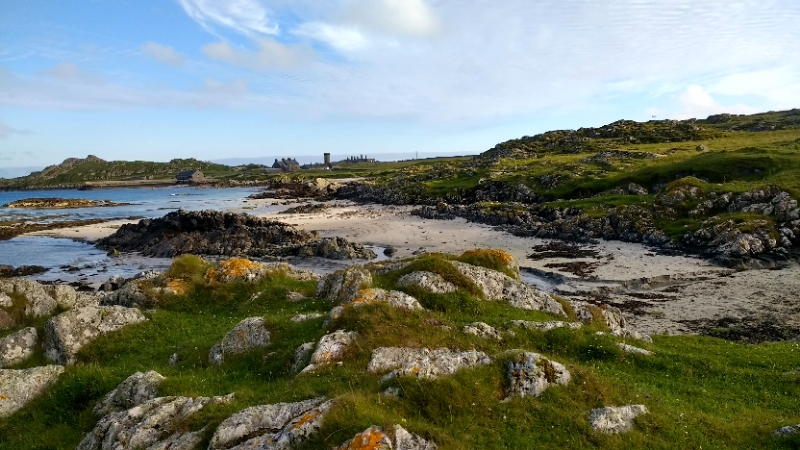