There's something special about a midweek microadventure, the thrill of sleeping out in the elements and heading back to work in the morning feeling like you've been on holiday, there's nothing quite like it.

I'm ashamed to say that I haven't done any microadventures since my Year of Microadventures ended in December 2015 but since the opportunity arose to join a Yes Tribe campout this week I decided it would be a good way to meet some cool like-minded adventurers and to try out my shiny new Rab Neutrino 400 Endurance sleeping bag.

The plan was to meet at Oxshott train station and since I'm working from home this week I decided to make the campout a mini bikepacking adventure and ride the 12 miles from my flat to Surrey. I arrived early but met a guy with a backpack who asked me if I was Yes Tribe and told me that there was a map on Facebook for us to follow to meet up with Dave (who is the founder of Say Yes More and the Yes Tribe). Both myself and Chris were newbies to the Yes Tribe campouts so it felt like first challenge and the initiation into the group was to find Dave! 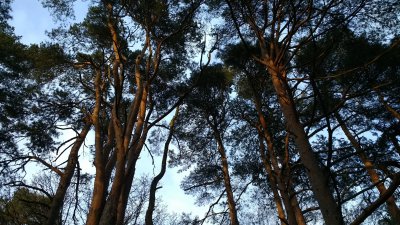 I'd like to say we trundled off on the heath and used our superb navigational skills to locate Dave in a jiffy but in reality it was Google maps to the rescue and a bit of a leisurely wander before we finally found him and his cool new Tentstile setup in a clearing playing frisbee. 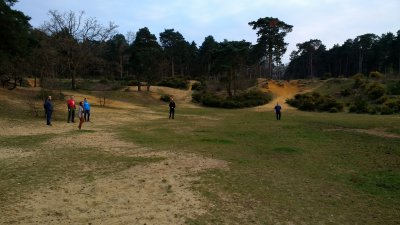 People arrived over the next hour and there were a lot of introductions. The second challenge of the evening - remembering everyone's names! Daylight was fading as we set off to find a camp for the evening and as we walked I found myself chatting to a few people. I love the fact that everyone has something in common with each other as we're all there because we love adventures and the outdoors, it makes the conversation flow so easily and it's fantastic to feel part of a group so quickly.

Once we'd found camp it was time to grab a spot and setup for the night. Everyone was busy and once unpacked people started to forage for branches to start a campfire. I decided on a flat patch by a tree and the plan was to try and rig my tarp up to the bike to make a shelter. It wasn't forecast to rain but if my year of microadventures taught me anything it was to be prepared for rain. Plus I've had this tarp for well over a year and have never used it so it's always fun to play with new kit. A bit of faffing later and I had my home for the night - pretty darn good if I do say so myself! 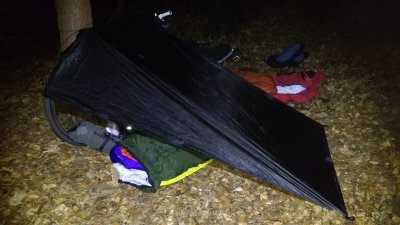 I wandered over to the others and found the guys starting a fire. A natural circle of people gathered around it and we all started to tuck into some food and chat. As the fire crackled away we did a quick 30 second introduction about ourselves to the group including who we were, what we'd brought for dinner and what we'd been up to since October (when Yestival was). 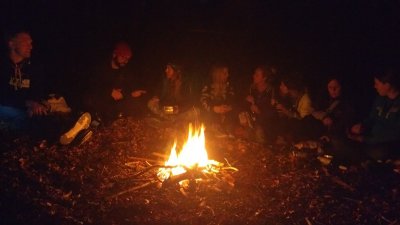 There were about 20 of us so it took some time but it was amazing to hear what people had been doing over the last 6 months. Even more interesting was hearing their plans for the rest of the year as most people had upcoming trips and adventures.

Taking a moment to just stare into the fire I realised just how happy I was to be there. It's difficult in life sometimes to feel like you're a little bit different and to always have to justify and explain to people your reasons for camping in the woods or going on a bike packing mission alone. Here everyone shared the same passions and wanted to grab life and experience it and do what makes them happy and being surrounded by people like that is so refreshing and inspiring that it made me feel so grateful and happy to be there in the moment.

The hours slipped by, food and drink was shared, everyone chatting and laughing and exchanging tips about gear or books or places to visit. Soon we noticed that it had started to rain, just a light drizzle but enough to prompt a quick reshuffle of bed spaces. Tarps went up and bivi's were shifted but we were soon back to the fire and the festivities.

It was after 12 when I decided to hit the hay and crawl into my bivi but once settled it was nice and snug. My new sleeping bag seemed rather toasty and it kept me warm throughout the night. I never sleep particularly well when outdoors and am usually nodding off when everyone else is getting up and this was no exception. By 6:30am I could see that a lot of people were packing up or were already leaving and I really just wanted to go to sleep. 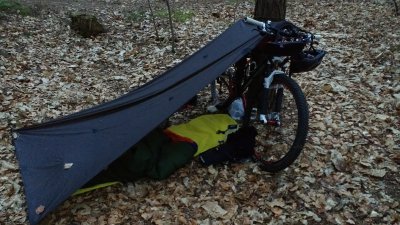 Nevertheless I surfaced from my cocoon and got my stove on the go for a nice cup of tea. One of the guys, David came over for a chat whilst I was packing my stuff away. I was pretty sure that I recognised him from somewhere and when I asked him he confirmed that he was one of the instructors at Camp Wildfire that I'd been to last year - it's a small world!

All packed up I said my goodbyes and mounted my bike for the ride home. I felt pretty tired but at the same time rather energised. Microadventures always seem to give me a feeling of being alive and making the most of life and this one had done just that. A fantastic night with truly wonderful and inspiring people, there's no better way to spend a Tuesday night!

Until next time Yes Tribers :-D 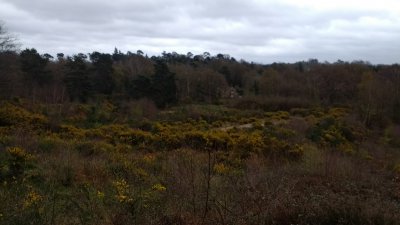